The photo on the left shows a group called Ukhavihera distributing food in Pemba. The photo on the right shows an organization called the Islamic Community of Mozambique (known by the acronym CIMO) handing out food in the district of Quissanga. Photos: Geo
Mozambique / immigration - 08/05/2020

The number of internally displaced people has doubled in the past five months in Cabo Delgado, a province in northern Mozambique. Thousands of people have fled a violent insurrection by a group of Islamist militants with ties to the Islamic State (IS) group and are now living in overcrowded camps or the homes of friends or relatives. Humanitarian organizations on the ground are calling for more assistance.

Since October 2017, a group of armed Islamist militants-- known locally as Al Shabaab, though they have no ties to the better-known Somali group-- have been carrying out a series of violent attacks on the resource-rich province of Cabo Delgado. In the past three years, more than 1,400 people have been killed in these attacks, according to the NGO The Armed Conflict Location & Event Data Project (Acled), which is working to document the situation in the province.

The attacks have intensified this year. Between March and June, insurgents seized numerous villages as well as the local capitals in the districts of Mocimboa da Praia, Quissanga, Muidumbe and Macomia. Photos posted online show charred ruins of homes and buildings and abandoned government buildings. Thousands of people have fled, by land and sea.

In July, there were 250,000 internally displaced people in Cabo Delgado, double the number in March, according to the UN’s Office for the Coordination of Humanitarian Affairs (Ocha). That represents close to 10 percent of the population of this province, which is home to 2.3 million people. Many of the displaced people fled to the coastal city of Pemba, which is the capital of Cabo Delgado. Many are staying with friends or family but their living conditions are precarious and they lack food.

The UN World Food Program (WFP) is currently trying to come up with a strategy to help the rising number of displaced persons. They hope to provide assistance to nearly 200,000 people in August. By September, they hope to establish a system of vouchers that can be redeemed in local shops.

The WFP says in this tweet that they helped 112,728 internally displaced persons in Cabo Delgado in June and an additional 8,030 people in Nampula.

Several residents of Pemba have also been working to help the displaced people. Georginelta Eurosia Eduardo teamed up with other young people to launch "Ukhavihera," which means "help,” to deliver essential goods to people in need. The group offered assistance to Miguel Momade, who fled the town of Quissanga with his family, including several children, after it was attacked in late March (Momade shared his story in part one of this investigation.)

Thanks to donations, Eduardo’s organisation has already helped four family groups, a total of 92 people.

There are nearly 40,000 displaced people in Pemba, many of them women, children and the elderly. Some have been there for the past six months, but most of them arrived more recently. Most of them are staying with friends or family. Sometimes 10 or 20 or even 30 people will be crowded into someone else’s home. The government and international aid organisations have a presence there, but the need is great and the assistance doesn’t reach everyone. Our group, which is made up of volunteers, talks to displaced families that come to Pemba and we identify their needs. Do they need food, clothing, shoes or a proper place to sleep?

We’ve partnered with a foundation here in Pemba, and with their help, as well as with some donations we’ve received, we distribute food, personal hygiene kits and clothing. We try to help these families start little businesses so they don’t have to rely solely on donations. For example, we bought equipment for some families so they could make cakes and sell them.

Ukhavihera, a group made up of young volunteers, distribute supplies to displaced people in Pemba. This photo was originally posted on Instagram by Georginelta Eurosia Eduardo.

In the neighboring district of Metuge, not far from Pemba, the provincial government set up five shelters that are now housing 10,000 people. Many of the tents on site were supplied by humanitarian organisations like the UN’s International Organization for Migration (IOM), which housed victims of Cyclone Kenneth last year. Other people built their own shelters with whatever they had lying around.

In June, Jasmine Opperman, an analyst with the NGO Acled, posted these photos taken by Pinnacle News in the shelters for displaced people in Metuge.

The diocese of Pemba and Caritas, a Catholic relief organisation, regularly brings aid to these camps. But taking care of victims of conflicts is complex, says the Bishop of Pemba Luiz Fernando Lisboa:

It’s easier to count the number of displaced people in the district of Metuge because, unlike in Pemba, most of them are living together in the same sites. Several different actors are involved in the camps and work with the authorities. However, most living conditions do not meet minimum standards of decency. Recently, the provincial government made sure water was available on site. However, there aren’t enough shelters. Sometimes, two or three families are crowded together in the same tent. It’s impossible for people to maintain social distancing in these places, even though we are in the midst of a global pandemic [On July 27, Mozambique had recorded 1,701 positive coronavirus cases and 11 deaths]. We distributed masks but that doesn’t solve the problem.

Today, we urgently need food and tents. We speak with these people often, and we are putting together a team that will provide psychosocial support for them because many are traumatized. Many also need medical care. Some walked through the wilderness for days and were injured. We also met a teenage mother who gave birth to her baby on the road, after fleeing her town.

Mozambique is going to need help from the international community to rebuild. We are hopeful that this conflict will end.

Valige Tauabo, the governor of the province of Cabo Delgado, delivered food aid to the families of displaced people in Metuge.
According to the Mozambican Institute for the Management of Natural Disasters (INGC), a further 8,000 people, including nearly 4,400 children, have fled to the neighboring province of Nampula. On July 14, the government of Nampula announced the opening of a special centre for displaced people. The provincial government also says it will provide land for displaced people to farm. Roughly 87 percent of the displaced people are farmers. Another centre for displaced persons will soon be opened in the province of Niassa.
Aid groups, including CIMO (the Islamic Community of Mozambique), hand out food to people displaced by the conflict in Cabo Delgado on July 26 in Nampula.
However, many organizations say that a large number of displaced persons haven’t been counted yet, or are currently living in zones that are difficult to access. The Islamic Community of Mozambique (CIMO), which plays an active role in providing humanitarian assistance to displaced people in Cabo Delgado and Nampula, has expressed worries about the people who didn’t leave the affected districts and surviving in extremely difficult circumstances.

Members of CIMO fill boats with food for the extremely vulnerable people who were unable to leave Quissanga after it was attacked. (Photo shared with the France 24 Observers by CIMO.)

Maulana Mansur, a member of CIMO, met with survivors in Quissanga, the site of many attacks:

It was a risky trip because the zone isn’t safe. We travelled from Pemba to Arimba by boat, carrying seven tons of humanitarian aid. I saw nearly 350 burned homes with my own eyes [The CIMO shared numerous photos of burned homes]. There were no more shops, nothing. The people who had stayed behind were sleeping in the marsh at night. Those who stayed behind were too old or too poor to flee. For the past few weeks, no one travelled to these zones, and so people left their shelters to fish or search for water. We were able to provide flour, rice, oil and clothes to nearly 3,000 people.

Next, we went to the island of Quisiui, where we met about a hundred families. We saw homes that had been burned there as well. Finally, we went to the island of Ibo, which was a bit safer because there was a military presence there. Many people who had fled attacks in other parts of the district came to this island, so that is where we saw the most people. All in all, our mission took three days. I have never seen anything like it.

There were also a lot of reports of missing people. We met a woman who was searching for a member of her family. She gave us his name, but for the time being, we haven’t been able to find him. 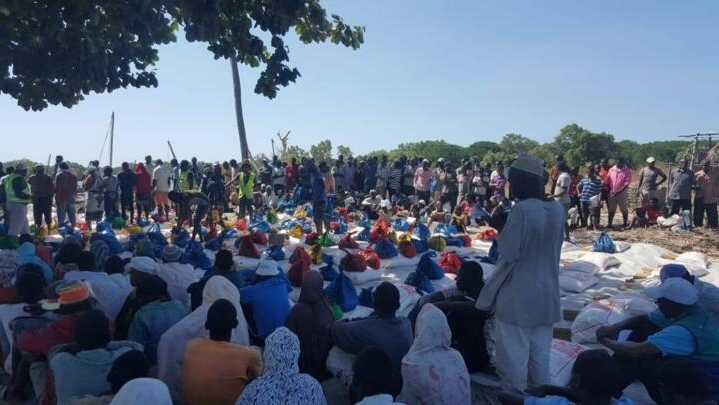 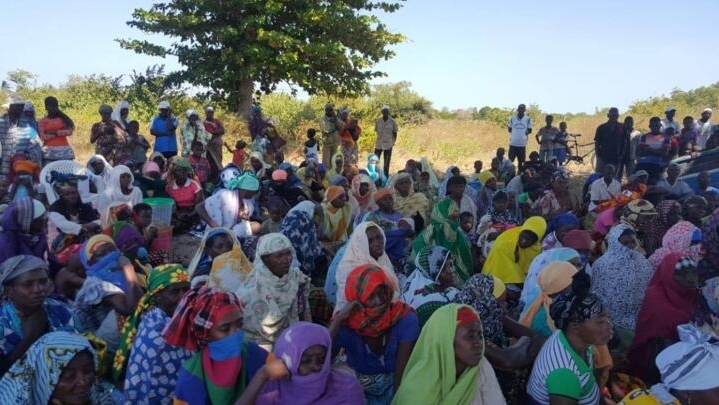 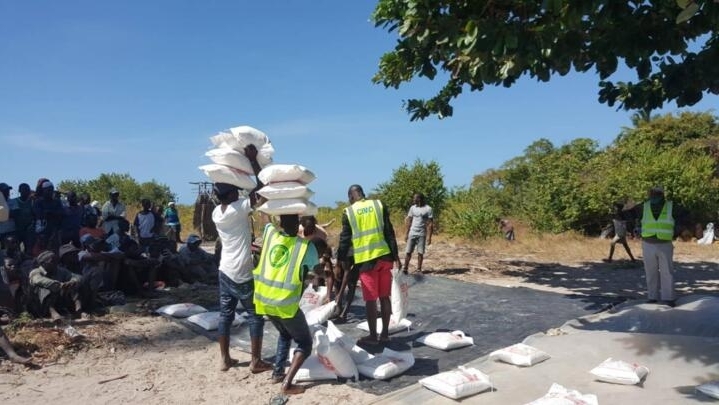 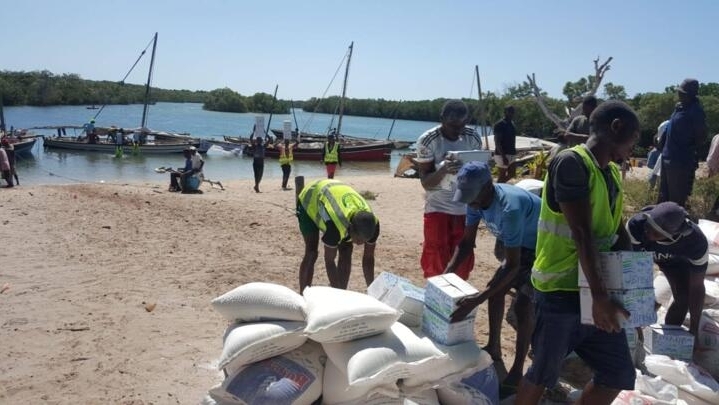 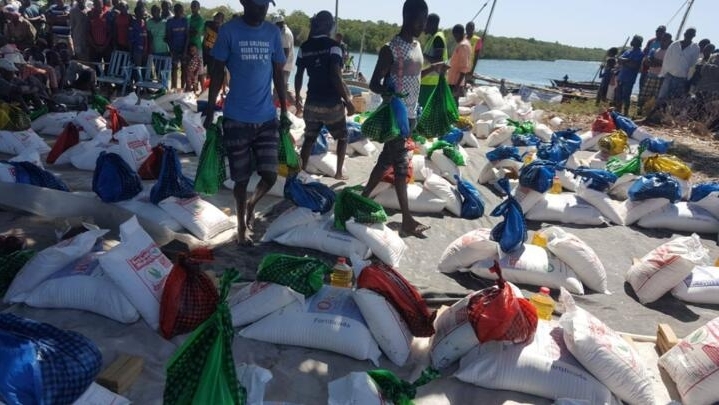 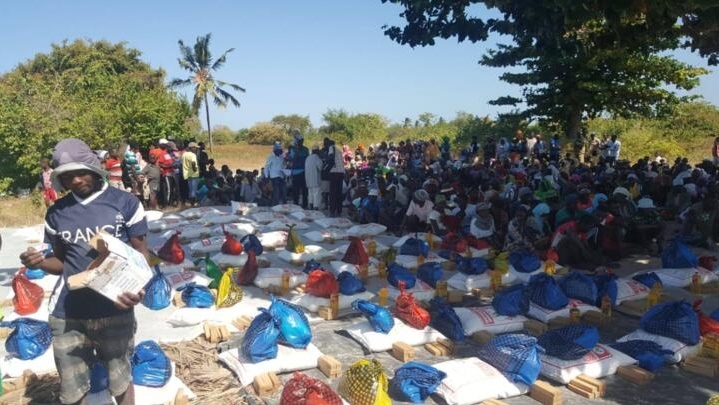 The CIMO mission to Quissanga took three days. These photos wer published by CIMO on Facebook in early June.
No international or regional aid

Despite repeated attempts, Mozambique hasn’t managed to control the situation in Cabo Delgado. In May, the Southern African Development Community (SADC) recognized that the insurrection in Mozambique posed a threat to the entire region. But, for the time being, there hasn’t been any regional or international intervention.

In an interview with French broadcaster RFI in July, researcher Martin Rupiya from the African Centre for the Constructive Resolution of Disputes (ACCORD), said that SADC should be "officially asked to intervene".

"The countries wait until the last minute before turning towards this institution. They try other techniques first, like using private security companies, because no one wants to see this region categorized as a conflict zone,” he explained. Essentially, Mozambique engaged a private security company, whose helicopters are used in the fight against the insurgents.

In a recent article, Jasmine Opperman, an analyst at the NGO Acled said that the response of the Mozambican security forces so far were characterized by "coercive tactics and human rights violations”. A regional intervention using these same methods could destroy the trust within affected communities.
In an interview with RFI in July, Martin Rupiya also agreed that the military option alone wouldn’t be enough: “There is need for investment to create infrastructure, employment and restore hope".