Left: The bus station in San Antonio del Táchira (photo by Yurkys Rosario). Right: The "Los Caracas" holiday resort. (photo by Neo Mendoza). These sites are both being used to house Venezuelans who have returned to their country during the pandemic.
Venezuela / Coronavirus - 06/01/2020

See profile
Tens of thousands of Venezuelans who were living and working in other countries in Latin America, including Colombia, Peru and Ecuador, have been making the long journey home after the lockdowns imposed to control the spread of Covid-19 left them out of work and out of money. Venezuelan authorities have been both criticised and applauded for how they are managing the flood of returnees. Two of these returnees, who had vastly different experiences, told the FRANCE 24 Observers about what happened to them when they returned.

Most Venezuelans who have headed home in the past months did so because they lost their means of income during lockdown. Many found themselves unable to pay bills or rent and some were even evicted.

Some people walked or hitchhiked all the way to the Venezuelan border, while others managed to get places on the free buses to the border organized by certain municipalities in Colombia. A few also managed to fly home, thanks to a programme called “Vuelta a la Patria” run by the Venezuelan government.

We published an article on May 22, featuring the stories of three Venezuelans who told us why they decided to return and described their harrowing journeys back.

>> READ ON THE OBSERVERS: By bus or on foot: the long road home for Venezuelans stuck abroad during the pandemic

Currently, Venezuela is only allowing 300 to 400 people a day to cross into the country by land. That’s why Colombian officials are only allowing a limited number of buses to go to the border each day. Once they cross the border back into their country, Venezuelans are supposed to be tested for Covid-19 and then required to undergo a two-week quarantine.

According to the country’s vice president, 220 returnees have tested positive in the past two months. The government has also chartered planes and buses to get the returnees back to their homes, once they do enter the country.

The FRANCE 24 Observers team spoke to Jozef Merkx, the representative for the UN’s refugee agency the UNHCR in Colombia. He said he was “worried” about the health consequences of the movement of so many people in the midst of a pandemic.

Eduardo Azuaje, one of the three Venezuelans who spoke to our team, is still stuck in Medellín, Colombia. The two others, Yurkys Rosario and Neo Mendoza, managed to get back to Venezuela and told us what it was like to return.

Yurkys Rosario was living in Cali, Colombia before the pandemic. In mid-April, she managed to travel on a free bus to Cúcuta, a town on the Venezuelan border. She entered Venezuela via the border crossing at the Simón Bolívar International Bridge.


Once I got to the Venezuelan side, we had to go through a police checkpoint. They took our temperature and did a rapid coronavirus test using a drop of our blood. Around 10pm, a bus took us to the San Antonio del Táchira bus station [Editor’s note: 2km from Simón Bolívar Bridge], where we were supposed to wait before going to a centre where we would be quarantined. I ended up spending four days there. It was horrible. I had to sleep on the ground and I only got a mattress after three days.

To go to the bathroom or take a shower, you had to wait in line for an hour, or sometimes up to three hours, because there were so many of us, around 2,000 in total. So lots of people went to relieve themselves around the bus station. The food was really bad and there wasn’t enough of it. And there were absolutely no measures taken to prevent the spread of Covid-19. 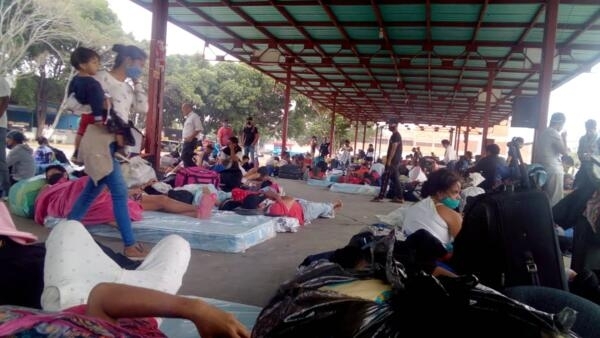 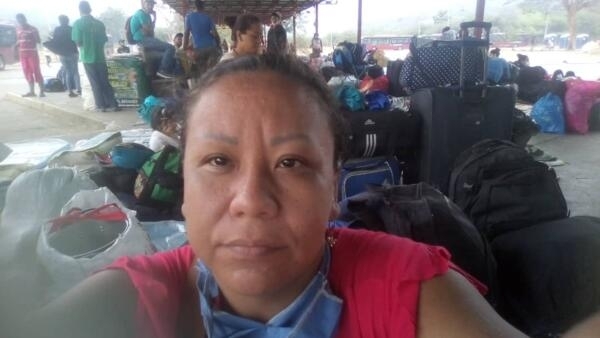 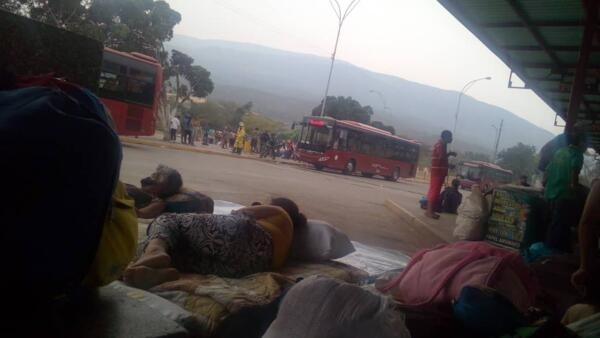 This is the San Antonio del Táchira bus station, where Yurkys Rosario spent four days after crossing the border into Venezuela.


Then a bus brought us to a school where there were lots of soldiers in Rubio [Editor’s note: 30km from San Antonio del Táchira]. There were 20 to 30 people per room. The food was bad. The toilets often got clogged. There were thefts, so we complained. After five days, buses came to pick us up because it was absolutely impossible to quarantine there.

Rosario had to spend five days in this centre. 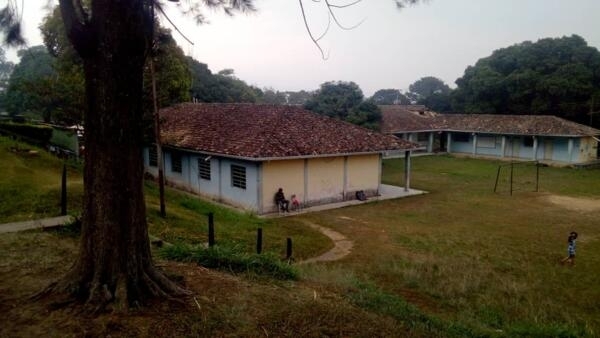 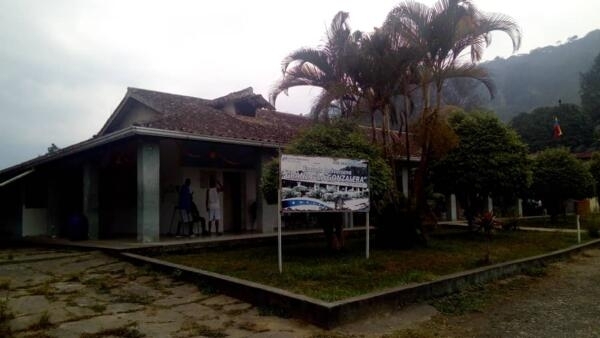 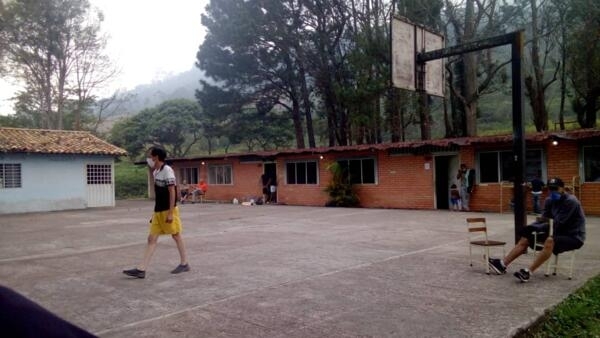 Rosario had to spend five days in this centre in Rubio:

Before leaving Rubio, we did another test. Then we travelled for more than 24 hours by bus. We didn’t have any water and had barely any food. When we needed to urinate, we had to use 2 litre plastic bottles because the toilets in the bus were closed and they didn’t make any stops. There were lots of women on the bus and I had my period!

Finally, we got to a hotel in Puerto La Cruz, in Anzoátegui state [Editor’s note: Around 1,100km from Rubio], where I spent ten days in quarantine. Then, a bus brought me to my home, which is in the same town, in early May.

The hotel in Puerto la Cruz where Rosario spent ten days in quarantaine.
Our team spoke to Javier Tarazona, from Redes, a Venezuelan human rights foundation, who also said that there had been certain failures in the government’s efforts to process and assist returnees.

“Some of them were transferred to centres where there is still no running water, electricity, mattresses or toilets or where it isn’t possible to respect social distancing measures,” he said. In a statement published on May 16, the Inter-American Commission on Human Rights said that they had received similar reports.

"They drove us to a holiday resort where we underwent quarantine”

However, some Venezuelans who spoke to the FRANCE 24 Observers team said that their arrival back in the country went well. Neo Mendoza was living in Lima, Peru before the pandemic. He got to northern Ecuador by walking and hitchhiking. Then he was able to get a flight back to Ecuador through the “Vuelta a la Patria” programme on May 9.


We flew from Quito [Editor’s note: the capital of Ecuador] to the Maiquetía Airport in La Guaira state. Three buses picked us up to take us to the “Los Caracas” resort in Vargas state [Editor’s note: Located about 80km from Maiquetía Airport]. Another group, who had arrived there five days earlier, were already quarantining on site. There were 86 of us. We were tested again, just to make sure that we didn’t have Covid-19. Everything went well and, after about a week, in mid-May, a bus brought me back to Caracas. It dropped me off 2km from my house.

It’s impossible to know if the tens of thousands of Venezuelans who have returned home will stay there once the situation has returned to normal. While Mendoza says he doesn’t plan to return to Peru, both Azuaje and Rosario say that they are planning to go back to Colombia.

“Here in Venezuela, the economic situation is catastrophic,” Rosario said. “I didn’t think it would be so bad.” The situation in Venezuela remains extremely difficult.

As the UN recently reported, Venezuela has been seriously impacted by US sanctions, spiralling hyperinflation and soaring unemployment. There have also been shortages in food, medicine and medical equipment and frequent power and water cuts.