Five amateur videos filmed along a 1,600-metre stretch of Tehran's Azadi Street on January 12, 2020, document the use of teargas and shotguns as Iranians gathered to protest their government's shooting down of a Ukrainian airliner.
Iran / protests - 01/17/2020

Contribute
Observers
A shotgun carried by a man in plainclothes, three women bleeding 70 metres away, teargas fired at screaming protesters… amateur videos filmed along Tehran’s Azadi Street on January 12 show that Iran’s security forces are still inflicting pain and injury on their citizens, even if they have put aside the Kalashnikovs they used to kill hundreds of protesters in November.

Five amateur videos verified by the France 24 Observers show incidents along a 1,600-metre stretch of Tehran’s Azadi Street. A January 15 report by Amnesty International says that security forces in Iran used “unlawful force” over the January 11-12 weekend, firing metal airgun pellets as well as rubber bullets and teargas at people demonstrating peacefully after Iran’s admission that it shot down a Ukrainian airliner. The group said the forces deployed included members of police special forces, the Basij militia and plainclothes agents.

“The pattern is very different from November. The security forces have been using different weapons and there have been no deaths reported so far,” Amnesty weapons expert Brian Castner told France 24.

Castner said projectiles like airgun pellets are not designed to kill, but can still cause injuries. “They are not lethal weapons, but they can take out your eye or give you a wound that gets infected,” he said. “And they’re extremely painful.” Such “less-lethal weapons”, he said, “can kill when used in an inappropriate way: if they are shot at close range for instance, or shot at the head”.

State media quoted Tehran’s police chief, Gen. Hossein Rahimi, as saying: “Police did not shoot in the gatherings, since broad-mindedness and restraint have been the agenda of the police forces of the capital.”

The France 24 Observers have verified five amateur videos that were filmed on Tehran’s Azadi Street on January 12. The videos were circulating via Telegram, the messaging app popular in Iran.

One video shows a group of five police officers in green uniforms with two men in plainclothes, one of them holding a shotgun. Distinctive features in the video show that it was filmed on Azadi Street, at the corner of Ostad Moein Street. The man in plainclothes is seen running east with the shotgun.

In this video, filmed January 12 on Tehran’s Azadi Street, two women are seen apparently wounded in the leg as passers-by help them.

In this video, also filmed January 12 on Tehran’s Azadi Street, a third woman lies on the ground, also apparently wounded in the leg, in front of Tehran’s 9th district municipality building.

The video of the man with the shotgun (left) includes shots of white barriers in front of a construction site and people standing in front of a pharmacy. In the video of two injured women (right) a pedestrian bridge is visible in the distance. 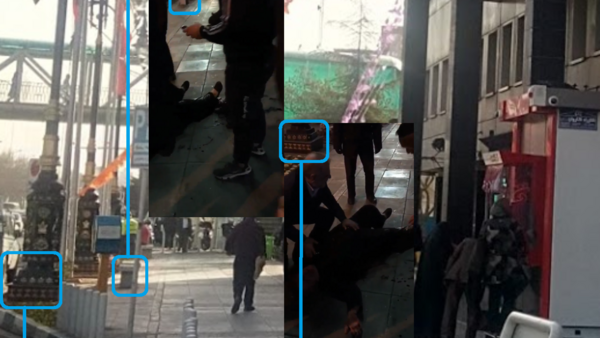 Two screengrabs from a video showing an injured woman (centre) contain visual details - a bench and a streetlamp - that allow us to identify the location as Tehran’s Azadi Street (seen in the background image taken from Google Street View). 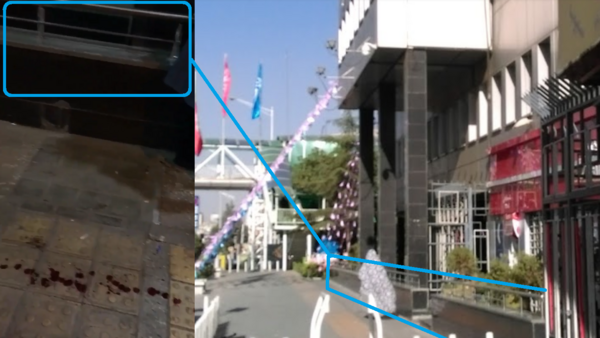 Another screengrab from the video of the injured woman (left) shows a grille in front of the 9th District municipality building (with black columns) and a branch of the Shahr Bank next door (with red awning).

Another video shows protesters gathered on a pedestrian bridge. Shots are heard, and metallic pings as projectiles hit the metal of the bridge. An eyewitness told France 24 he saw two of his friends get shot on the bridge, one in the head and one in the leg. He said they were taken to hospital for surgery.

This video was filmed at the intersection between Azadi Street and Habibollahi Street 800 metres east of where the three women were shot. Shots can be heard, as well as the sound of projectiles hitting the bridge. A witness told France 24 two people were wounded. 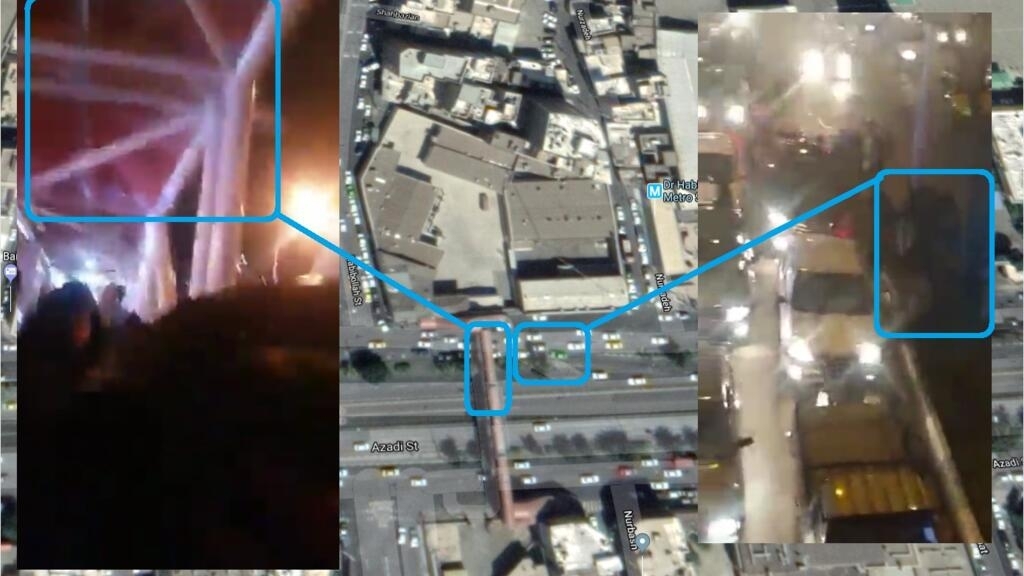 The video (screenshot on left) was filmed on Tehran’s Azadi Street Jan. 12. The bridge’s red awning can be seen on Google Maps, as well as the division between the lanes. 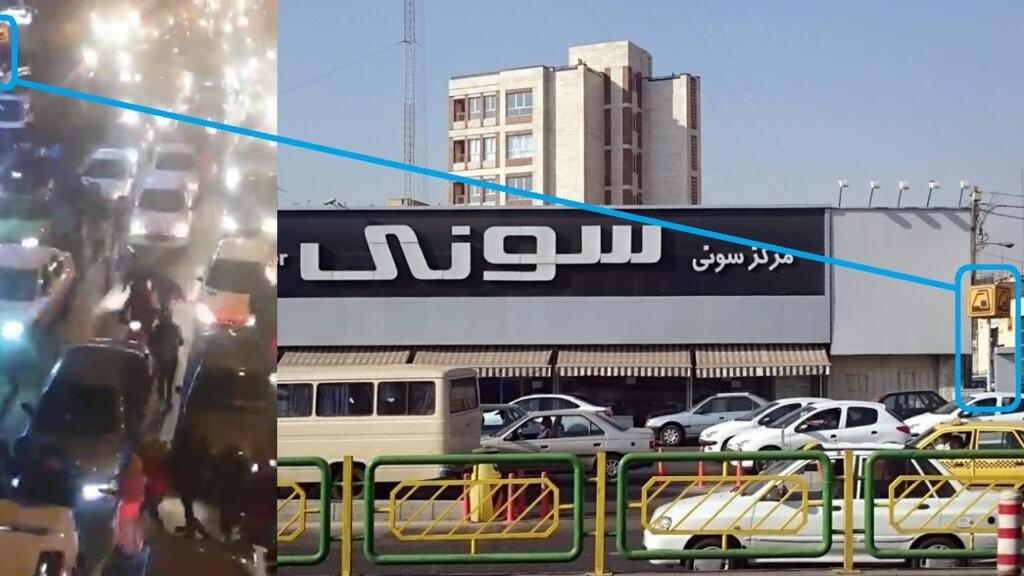 The same video, with a sign visible for the Habibollahi Metro station. 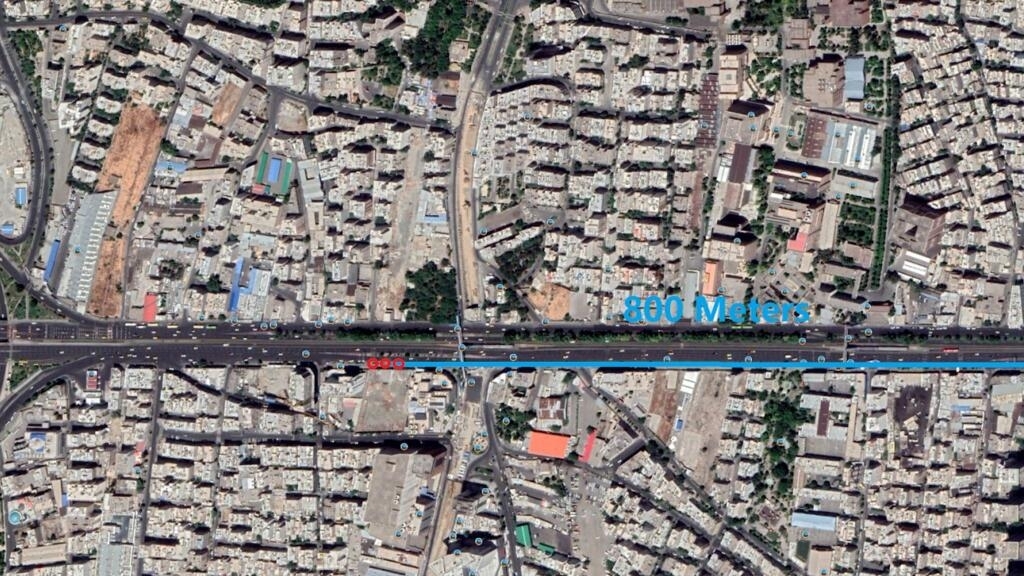 The pedestrian bridge is situated 800 metres east from the location where three women were injured.

This video, also filmed an Azadi Street on January 12, shows teargas projectiles being fired at a crowd of protesters. At 1’08, a canister passes close to the camera operator’s head.

The teargas video starts recording in front of a Resalat Bank branch and ends near a pedestrian bridge at the corner of Azadi Street and Jeyhoon Street.