Why are Chinese and Hong Kong visitors to a Lithuanian memorial site fighting over crosses?

How did the Hill of the Crosses in Lithuania, a memorial to those who resisted the Soviet occupation, become an unlikely battleground for supporters and opponents of the Hong Kong protests?

A surprising video went viral in early January, garnering more than 400,000 views on Twitter. It shows a Chinese tourist standing on a path and looking at a bunch of wooden crosses. She picks up one small wooden cross from the ground and reads the words written in Chinese on it.

The inscription reads: “Hongkongers, liberate Hong Kong! It’s the revolution of our century”. The young woman laughs as she throws the cross away.

“Our country is great!” says a second woman, who is filming.

Some Chinese vandalized crosses placed by Hong Kongers on Hill of Crosses in #Lithuania while laughing:

"It's written 'Liberate Hong Kong, Revolution of our time'"
"Just throw it there. Get lost!"
"We've done a good thing today. Our Motherland is great!"pic.twitter.com/c4LTmo2BWw

The woman in the video first posted it to Instagram last November along with the caption: “Hong Kong wants independence? You must be dreaming! Our country is great! Long live China!”

The video didn’t go viral until it was posted on Reddit in late December. Lots of people found the woman’s actions offensive and quite a few left insulting comments (mostly in Chinese) on the original post.

The video was originally posted to Instagram in November 2019. It has since garnered more than 80,000 views.

This video went viral after being shared on Reddit.

Religion was banned during the Soviet occupation of Lithuania, so many people there see desecrating or vandalizing a cross as both an insult to a sacred place of worship and an insult to the country’s past.

The Hill of Crosses, which is near the town of Šiauliai in northern Lithuania, is a historic site honouring peaceful resistance to occupation. Crosses inscribed with messages about freedom started appearing on the hill after 1944, when Lithuania was retaken by the USSR after the Nazi occupation. Soviet authorities made several unsuccessful attempts to destroy the site.

The Hill of Crosses is extremely important to Lithuanians. People make religious pilgrimages there but they also see it as a shrine to freedom of speech. Anyone can buy a cross there, write whatever message they want on it and place it in the ground.

After the video started circulating online, quite a few Lithuanians were angry. One person posted on Reddit that she had placed a cross with a pro-Hong Kong message at the Hill of Crosses to replace the cross that was thrown away in the video. The post was called “Your cross is back on the Hill of Crosses.”

Two days after the video was shared, a Lithuanian social media user said that he had gone to the site to replace the cross that was thrown away in the video. In his Reddit post, he says that he wanted to pay homage to the pro-democracy protesters in Hong Kong.

Even Lithuanian authorities chimed in on the debate about the video, saying that throwing away a cross was shameful and amounted to vandalism. Mantas Adomėnas, a member of the Lithuanian parliament, posted a message expressing his support for the Hong Kong protestors on Facebook. 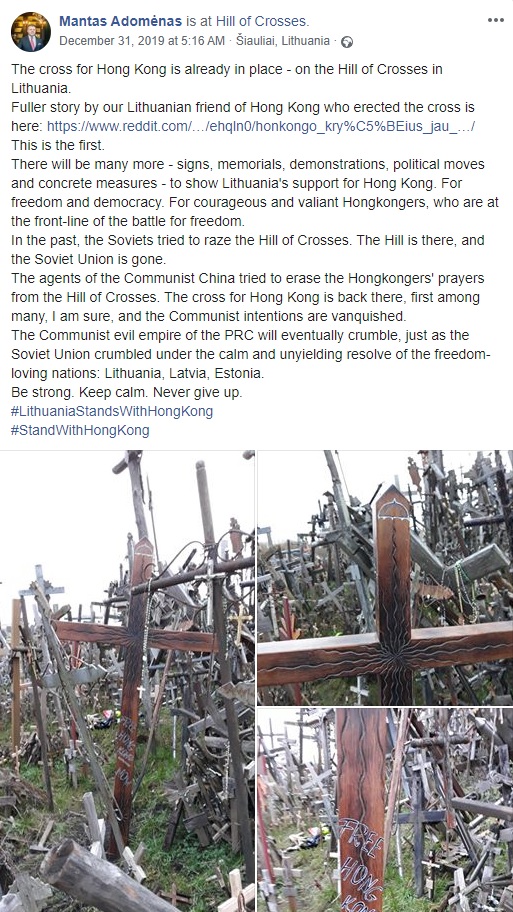 This isn’t the first time that someone has vandalised one of the crosses on the hill. Another Facebook post -- first published in late September -- also started circulating this week. The footage is of a Chinese woman who says that she used lipstick and eyeliner to cross out the messages of support for Hong Kong protestors that were written on the crosses.

The photo below shows how Chinese visitors to the site actually wrote on a cross that had been placed by Lithuanians to honour their ancestors. The Chinese writing translates to, “I wish that the cockroaches [the nickname given to the pro-democracy protesters by supporters of Beijing] will soon rest in peace. I want Hong Kong to find peace quickly!”

This video has sparked a debate in the country with some Lithuanians wondering if crosses with political messages should be allowed. The Lithuanian police have launched an investigation in an attempt to punish those behind the vandalism.