Contribute
Police officers hit people, smashed windows and fired shots in the middle of the street in the Policarpa neighbourhood in Bogotá on the evening of November 21, a day of national strikes. The accounts given by eyewitnesses line up with the amateur videos filmed at the scene. A week later, residents are still in shock at the level of violence that occurred.

An unprecedented protest movement has been shaking Colombia over the past week. It began on November 21, when hundreds of thousands of people took to the streets to protest the policies of President Iván Duque and the protests have continued every day since. Though most of the demonstrations have been peaceful, they have faced persistent police repression since the very outset.

>> READ ON THE OBSERVERS:  Colombian teen dies after being shot in the head by police

The Policarpa neighborhood has been particularly affected by police violence. FRANCE 24 spoke to numerous witnesses in this area located south of the town centre.

According to some of the people interviewed, the violence began when “hooligans” vandalized the main bus stop, set up barricades and started numerous trash can fires. They said the police passed in front of the stop several times but didn’t intervene.


People wearing hoods vandalized the main bus stop in the neighborhood early in the evening of November 21 (Check out exactly where this occurred by clicking here).
Physical violence and destruction of property

Around 8:30 or 9pm, quite a few police officers stormed into the neighbourhood. They chased away the hooligans, but then they set in on locals who had been banging on pots and pans in a peaceful protest just moments before. The police were hitting people and they also used tear gas.


This video, filmed near the main bus stop, shows locals taking part in a peaceful protest. They are shouting “Without violence!”
"I haven’t been able to walk straight since police hit me in the head”

Alex Cubides Narvaez, a 32-year-old shopkeeper, was just trying to go home that evening when he was caught and beaten by the police. Six days later, he still hasn’t recovered from his injuries.


I don’t really remember well what happened that night, because I had some kind of blackout. According to the people who saw me, the police were beating me up with their truncheons. They hit me in the head numerous times.

WARNING: SOME VIEWERS WILL FIND THE FOLLOWING VIDEO DISTURBING.


This video, filmed by a local, shows Alex lying on the ground (You can click here to see the exact location on a map). Then he stands up, his face covered in blood, and crosses the street to join the other people. They start trying to help him. “Look what the police have done!” yells one woman.
Alex Cubides Narvaez continues:


My brother and my friend brought me to the hospital right away. My brother says that I was extremely disturbed - I was yelling. The medical staff carried out a brain examination and they took an X-ray of my arm, which had been nearly broken. I also got stitches in my head wounds. We finally left around 3:00 or 4am.

The next day, when I was talking to my brother, my memory started to come back, little by little. But I still can’t remember everything. I’m still healing. Since going to the hospital, I’ve barely left home. I haven’t been able to work.

There are some things that really worry me. For example, I can’t walk straight. Or, yesterday, I went into a shop and bought something. The shopkeeper gave me the change and then I stood there and asked him for the change, even though the money was in my hand.

I am supposed to go back to the hospital for another brain scan. I will also go and file a complaint.

"My 15-year-old cousin was hit in the head by a police officer, who then smashed out the windows of a car”

Juan was also beaten up by the police, along with several other members of his family. The police then smashed out the windows of a car parked in front of their garage. He didn’t want to use his last name, for security reasons.


We saw people running at the end of our street and then police appeared. My uncle told me to close our garage door. The police thought that we were hiding hooligans in there, so they started to force open the door and then one of them grabbed me and hit me with a truncheon.

Then, one of his fellow officers tried to damage the black car that we were working on, as well.

My uncle said that he was going to report them but then one of the officers threatened him, saying, “I know where you live!”

My aunt was also shoved when she tried to take a photo of the police car’s licence plate. On November 23, my family went and filed a complaint [Editor’s note: Our team was able to read this complaint].


In this video, filmed from inside Juan’s garage, you can hear a man saying that they need to shut the door just as you see people running with police chasing after them (Check out a map of the location here).
A second video, filmed by neighbours who live a few houses down, shows people running with police chasing after them. Two cars sit parked a few metres away (Check out a map of the exact location here). The police then start heading for the cars. “The police are breaking windows in people’s houses and cars,” someone says at 0’48. Though it is hard to make it out entirely, you can hear the sound of blows and breaking glass. “They hit the people who were there!” someone shouts near the end of the video (1’47). 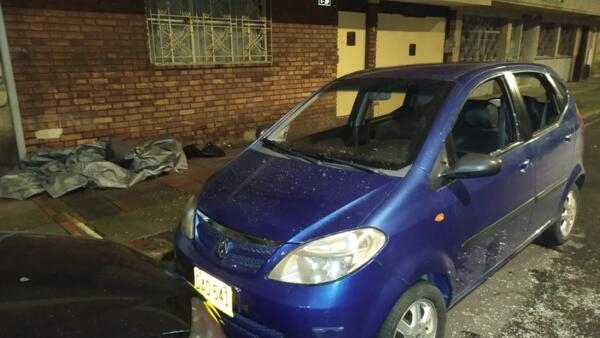 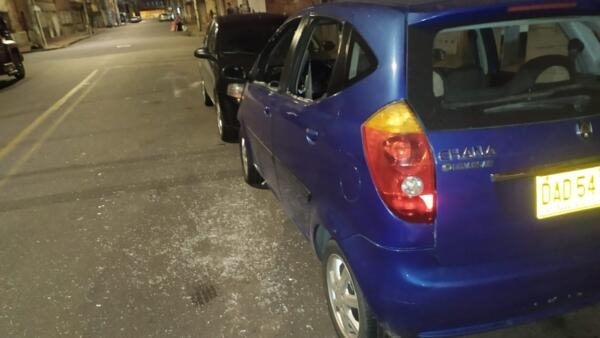 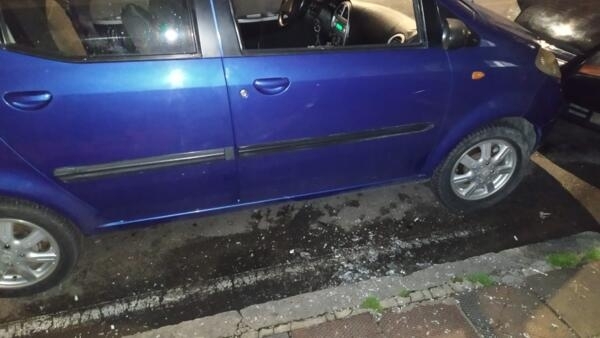 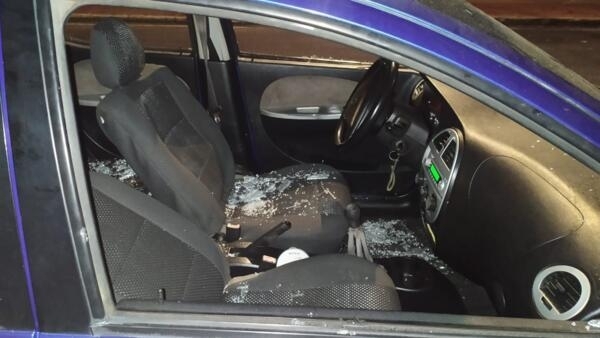 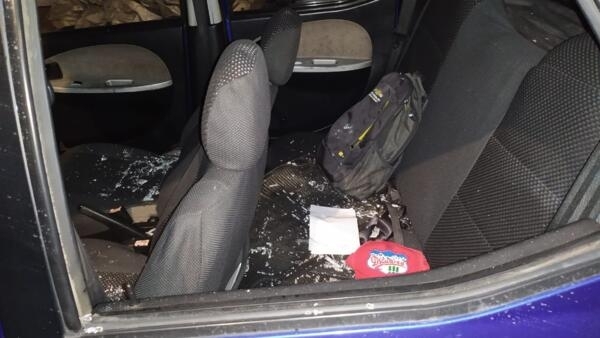 A local resident sent our team photos of the two cars that Juan’s family was working on. The images were taken shortly after the police vandalized them.
Police also broke out the windows in a number of different homes in the neighbourhood. The video below shows at least three officers using their truncheons to hit the glass doors of a home (starting at 1’30) where people are hiding. There is the sound of breaking glass and then people start yelling and shouting out insults.


Police smashed out the windows of this home. (Check out the exact location where this occurred here.) Two other videos show exactly the same scene, starting at 0’45 in the first video and 0’19 in this video.
Armed police threaten locals
Police also threatened people living in this neighbourhood, sometimes with weapons in hand, according to Lobsang Parra, a sociologist at the Universidad Nacional:


I was at home around 1:00am and the police drove by on motorcycles. They were showing their weapons and would point them at the windows where they saw people, as if to scare them and keep them from going out in the street.

Police officers also fired shots in the street, like the video below.


Police officers fire shots in the streets of the neighbourhood. (You can check out the exact location where this image was taken by clicking here.)

"This neighborhood is stigmatised”

A week later, residents of Policarpa are still struggling to understand why the police lashed out with such brutality. Some of them say that the police have instilled a “strategy of fear” to prevent people from protesting. Others think that the repression is tied to the fact that the neighbourhood is known as a centre of opposition, according to Jhoan Pinto Castro.

"This isn’t your average neighbourhood. Most of the families who live here were originally from rural areas but were displaced by violence in the 1950s [Editor's note: tied to the armed conflict that wracked Colombia for years] and came and squatted this area. It’s a neighbourhood with a history of social struggle, so it is stigmatised. So it’s possible that police received specific orders about Policarpa because of the idea that some people have about its residents."

Our team contacted the Colombian police, but, so far, we have not received a comment from them. We will update this article if they provide a response.