Contribute
Observers
Three Ivorian students at the University of Daloa, in the centre of the Ivory Coast, launched an app that teaches farmers how to transform organic waste into natural fertiliser and insecticides. A group of 150 farmers have been taking part in a first trial of the app – dubbed "BioSave" – since August.

Ivory Coast is the leading agricultural producer in West Africa. Ivorian farmers supply the domestic market, as well as exporting to other francophone countries in the region, including Burkina Faso, Mali, Guinea, Niger, Togo and Benin.

Manhounou and Robert wanted to promote cheaper, more environmentally friendly products, so they had the idea of developing an app to teach farmers how to make their own organic fertiliser. In August 2018, they reached out to Kouassi Kotchi Willy Ramses, an alumnus of Jean Lorougnon Guédé University, to help them with their project.


The three founders of the app pose together in this photo. (Photo given to the Observers by Kouassi Kotchi Willy Ramses.)
A year later, the three founders finally finished a prototype of the BioSave app. It is currently under trial by a group of 150 farmers from the village of M'bayakro, which is located several kilometres from Daloa.
This is a demo video for the BioSave app (provided by Kouassi Kotchi Willy Ramses).

Ramses explained to the Observers how the trio had developed the app.


We started by looking into the areas where our application could be useful to farmers. We decided to launch it in M'bayakro, which is on the road between Daloa and Abidjan. When we were talking to the farmers, we found out that the companies who sold them these chemical products (fertilisers, insecticides, etc.) often didn’t give them instructions for how to use them.

One man told us that he wasn’t able to make a living from farming because the chemical products were so expensive. He said he spent nearly 150,000 CFA francs [€228] a year buying them. In another village, not far away, another farmer had completely destroyed his field because he didn’t know the correct dosage for the products he was using.


The developers of the app met with farmers in M'bayakro. (Photos provided by Kouassi Kotchi Willy Ramses.)
The farmers in M'bayakro were really interested by our project. At first, some of them thought we were a new company that had come to sell them products, but when we explained that our app would teach them natural methods that would help them be independent, they were really surprised. They wanted to know what we were getting out of it.


This workshop taught farmers how to sort organic waste. (Photos provided by Kouassi Kotchi Willy Ramses.)
'The only problem that we encountered was that not all of the farmers have a smartphone'
Natural products are really important for people like us – consumers who live in the city. Since the 1990s, people in the Ivory Coast have tried to buy food produced domestically. To respond to that demand, farmers tried to increase their yields by using fertiliser. People weren’t really interested in the quality of the product, just where it was produced.

Before showing the farmers the app, we ran a workshop where we taught them about how to sort waste so that they were keeping organic matter that could be used to make fertiliser.
At this workshop, farmers learned how to make fertiliser. (Photos provided by Kouassi Kotchi Willy Ramses.)
It was only after this workshop that we introduced them to the app, which has different “recipes” for fertiliser that are easy to make from organic waste. The only problem that we encountered was that not all the farmers have smartphones. In fact, out of the 150 farmers, only 80 had a smartphone. That’s how we got the idea to develop a voice-operated server that would work on simple mobile phones 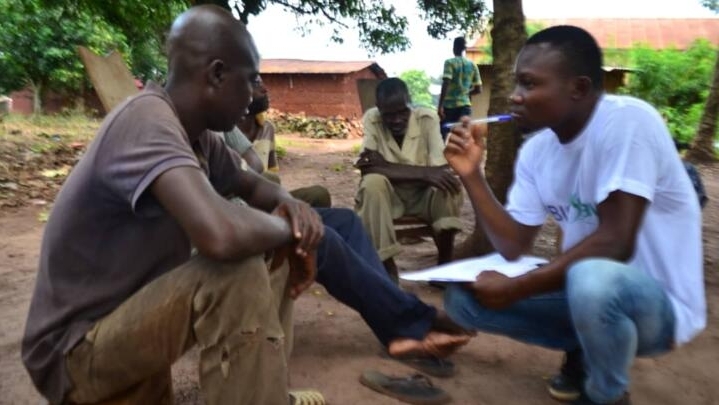 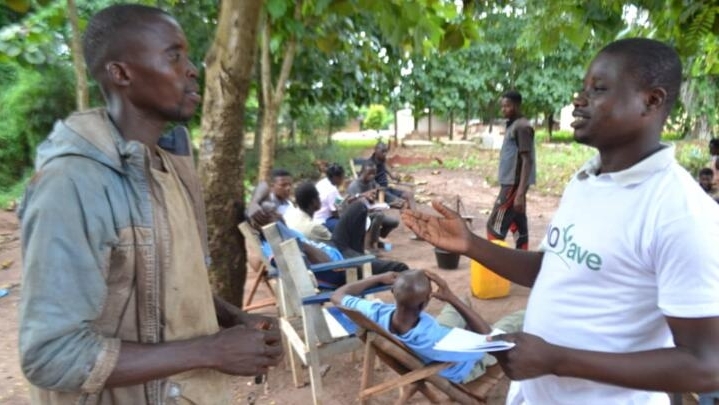 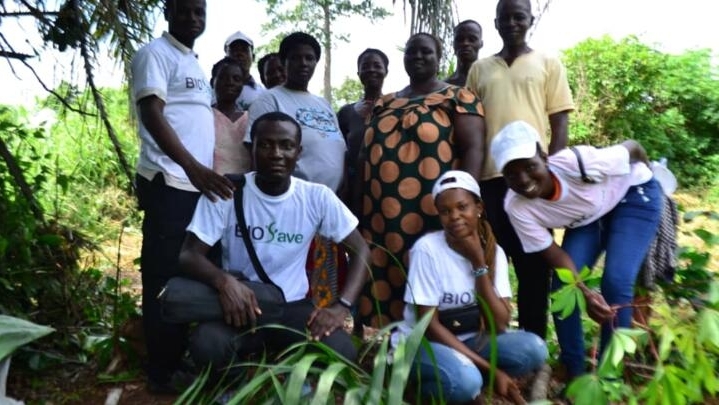 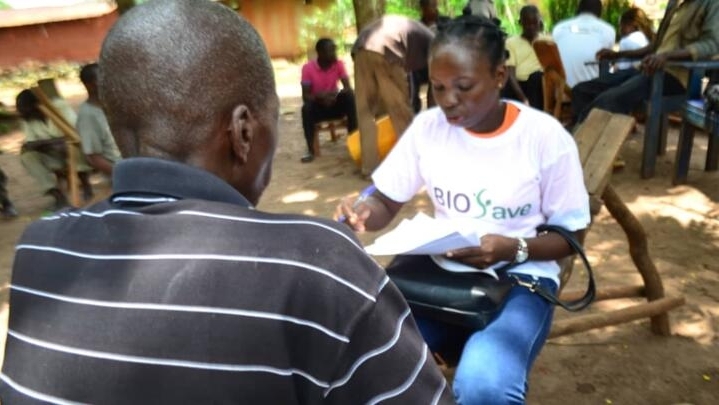 Farmers in M'bayakro meet with the developers of this app. (Photos provided by Kouassi Kotchi Willy Ramses.)
Currently, the app is available in three different languages – French, Baoulé and Malinké, the languages that are most widely spoken in the region. The instructions are transmitted through images and voice notes, allowing the largest possible number of people to use it. 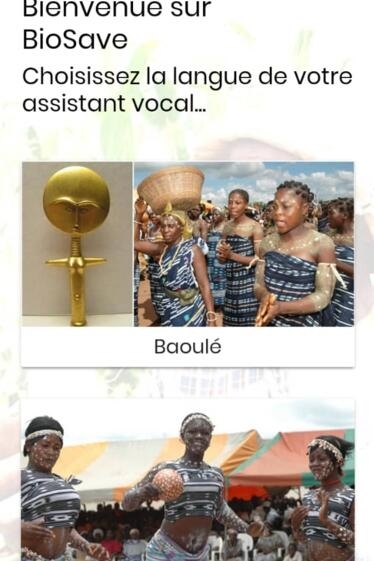 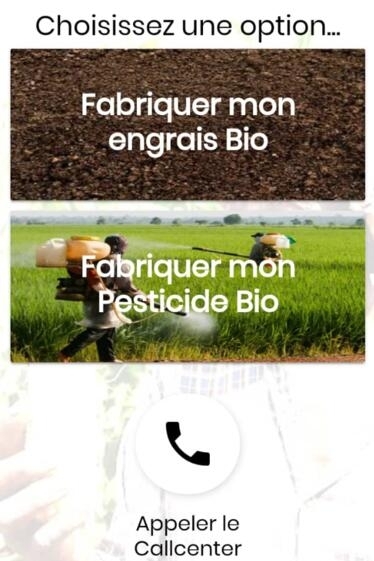 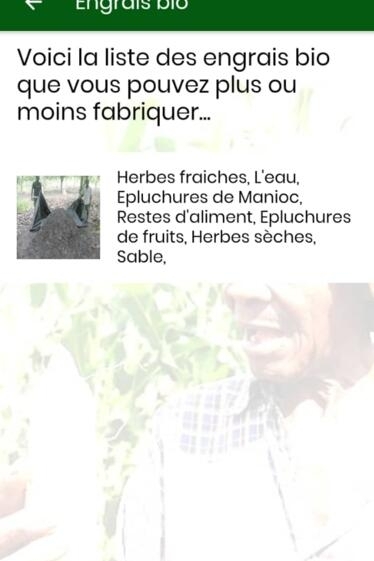 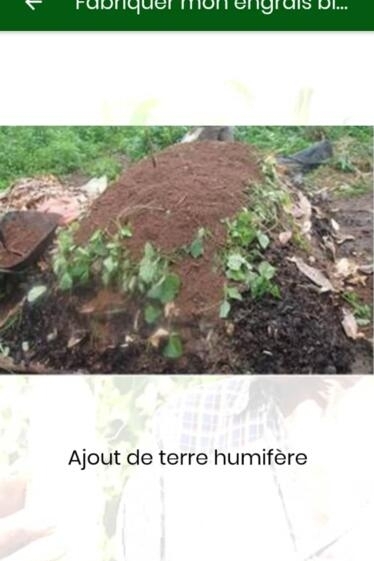 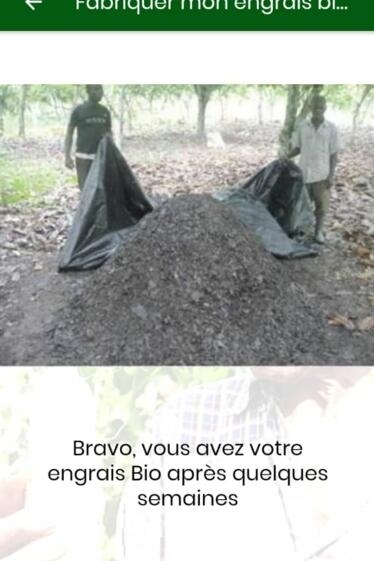 Screengrabs of the app (provided by Kouassi Kotchi Willy Ramses).
The three founders were able to build this prototype after winning a million CFA francs [€1,520] in Civagrihack, a national hackathon held in August 2018. In September 2019, they won three million more CFA francs [Editor’s note: around €4,570] when they won the 2019 Social Entrepreneur Prize awarded by phone operator Orange CI.
Ramses explains how they are planning to use this money:

We want to develop our app in other languages and improve certain aspects. For example, we’d like to make it so farmers could choose what organic waste they have and then get a custom recipe for fertiliser.

I need help programming all of that and opening it up to more people. Eventually, farmers will have to pay a fee of 300 CFA francs [less than one euro] to use the app.

We also want to set up a composting service in town to make organic fertiliser on a larger scale. We’d collect organic waste from residents and then sell the fertiliser to people who might not have the means or the space to make their own fertiliser