Thousands of people marched through the streets of Hong Kong this weekend to protest the disappearance of five booksellers known for selling literature critical of China’s Communist leadership. Many suspect the Chinese government’s involvement and are adding it to a long list of mainland interferences in Hong Kong’s supposed autonomy.

Thousands of people marched through the streets of Hong Kong this weekend to protest the disappearance of five booksellers known for selling literature critical of China’s Communist leadership. Many suspect the Chinese government’s involvement and are adding it to a long list of mainland interferences in Hong Kong’s supposed autonomy.

The five booksellers, who worked at a small shop called Causeway Bay, went missing last year. Hong Kong authorities say that they are carrying out a thorough investigation, but many activists and politicians believe that this was a political kidnapping and that China is to blame. 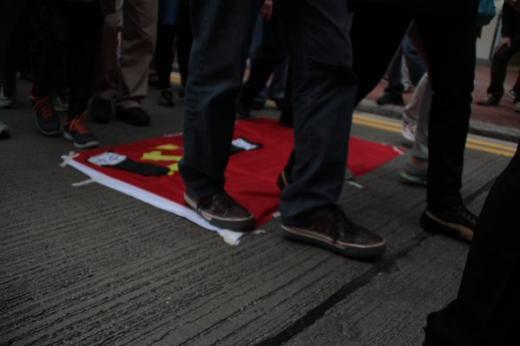 The booksellers-- Gui Minhai, Lee Bo, Lui Bo, Cheung Ji-ping and Lam Wing-kei -- specialised in tabloid-style books about the Chinese Communist elite. A source told the Guardian that they were preparing to publish a book about Chinese President Xi Jinping when the disappearances started. One went missing while in Thailand in October. Three others also disappeared that month while in mainland China. The last, Lee Bo, was last seen in Hong Kong on December 30. He later called his wife to tell her he was in China. She found his passport and mainland travel permit at home, leading many to believe he was kidnapped and brought to China.

Though ruled by China since 1997, Hong Kong’s independence is guaranteed by a constitution called the Basic Law and a principle called “one country, two systems”. Yet, over the past few years, anger has been brewing in Hong Kong as residents say that China continues to infringe upon their rights. If Bo was kidnapped, that would violate a separation of Hong Kong and China’s legal systems guaranteed by the constitution.

Joel Christian is a media student in Hong Kong. He’s been following the anti-mainland protests for the past few years. He live-tweeted the protest on Sunday, January 11.

Most of us believe that Lee Bo [Editor’s note: Bo, who also holds a British passport, is the most recent to disappear] and the other booksellers were abducted by Chinese authorities, who didn’t like that they were selling subversive literature. Because mainland Chinese officials are not supposed to have power in Hong Kong, we believe they brought them to China in order to arrest them.

Headline Daily, a Chinese-language newspaper in Hong Kong, reported a few days ago that they received a confidential video of Lee Bo, in which he said he returned to the mainland by choice and asked people not to protest. That seems really suspicious. But I don’t know anyone who’s seen the video, which makes us wonder if it even exists. And even if there was, he was probably forced to say that.

“Police were biased in how they handled protesters”

More than 5,000 people attended this weekend’s protests [Editor’s note: Some activists claimed there were up to 6,000 people present. The government set attendance at 3,500].

Last year, there were big anti-mainlander protests every few months. In the past few years, Hong Kong people have grown afraid of police because of their use of tear gas, pepper spray and violence during protests. There have also been rumours of undercover mainland authorities who come to watch activists at these protests. Many activists are afraid of surveillance, which is why many of them now wear masks.

Joel Christian filmed this protestor dressed up as Lee Bo, one of the missing booksellers, trapped in a cage.

This weekend, the police weren’t violent, they just tried to maintain order. However, they were biased in how they handled protesters. The localist protesters, who believe that China is bent on destroying Hong Kong and want independence, were cordoned off for over an hour while other, more moderate protesters were allowed to move around. [Editor’s note: These protesters often wear dark clothing and masks and carry banners for Hong Kong independence or flags from Hong Kong’s time under British colonial rule]. 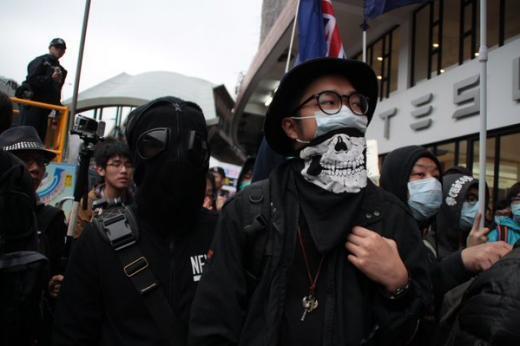 Localist protestors started wearing masks because they worried they were being watched by authorities, according to Joel Christian, who took this photo (link to full album of protest photos) 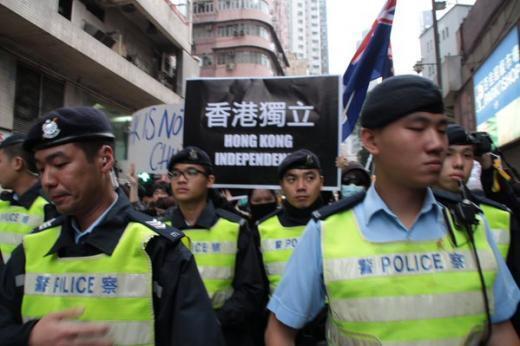 Police surrounded the localist protesters, who believe Hong Kong should be independent.Photo by Joel Christian (link to full album of protest photos)