Catherine King and Wayne Adams have spent more than 20 years living ‘off-the-grid’ in the Canadian province of British Columbia. The couple, who built their island self-sustaining home back in 1991, have been growing food, collecting drinking water and generating electricity ever since.

‘Freedom Cove’, as the couple have called their floating home, lies just off the coast of Vancouver Island in Canada’s western province of British Columbia. The pair began building their island island back in 1991, before upping sticks and taking the decision to live there permanently one year later with their children.

The 2,000 square-meter structure is made up of 12 floating platforms linked together by wooden walkways. In all, the home of King and Adams – both of whom are artists – consists of gardens, five greenhouses, solar panels, a dance floor, an art gallery, a lighthouse that doubles as a guestroom and a studio that the couple lives in.

As well as being a professional dancer, 59-year-old King is a keen painter and poet. Adams worked in Canada’s forest industry for a dozen or so years before committing himself to sculpture, an art that the 66-year-old taught his wife after meeting her in 1987. The couple support themselves by selling their sculptures in the neighboring town of Tofino.

King tells France 24 how the artistic duo turned ‘Freedom Cove’ into a floating symbol of self-sustainability.

We wanted to live close to nature because as artists that’s what inspires us. That’s why we decided to build this floating home. It works ecologically, in order to limit as much as possible its impact on the environment.

We use recycled material. For example, we salvaged steel from the surrounding fish farms to replace the island’s platforms that were up until then made of wood. The problem with the wood was that it kept rotting, so we had to keep replacing it. As you can see, our home and our gardens are constantly evolving.

In terms of energy, we use solar panels to produce electricity. We’ve also got a generator fueled by natural gas that we only use when the solar panels are recharging, so not very often [Editor’s note: The couple have neither a refrigerator nor a freezer].

In our gardens we have vegetables, berries, herbs, edible plants and fruit trees. We also do lots of composting. We manage to grow stuff around the year thanks to our greenhouses and the region’s moderate climate. We also do fishing and catch crabs. As a result, we always eat food that’s fresh and seasonal.

The couple grows vegetables throughout the year thanks to their greenhouses. Photo published on Catherine King’s Facebook page. 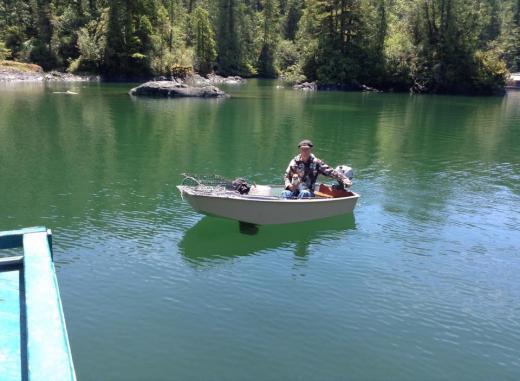 The water that we use and drink comes from a waterfall just a few meters away from the island in the forest. We’ve also got two reservoirs to gather the winter rainfall. Pipes carry the water to our gardens and also to other areas in the house where it’s needed.

That means that we live a self-sustainable life on our floating island, even if it’s true that every two weeks or so we head to town to buy cereal, for example. My husband also takes advantage of these excursions to buy some meat. It’s only for him though, because I’m vegetarian. As a rule of thumb, we consume fairly little and try to avoid food wrapping as much as possible. 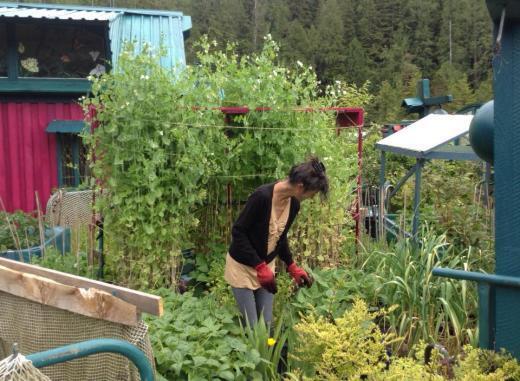 Catherine King in one of her gardens. Photo published on the Facebook page of Wayne Adams.

In winter there are often storms. That’s our biggest problem. When the weather turns bad, we use canvas sheets to protect our gardens. We also have trees that protect the smallest plants. On top of that, we have also linked our platforms up to the shore with thick rope, allowing us to shelter the entire island in case there’s a huge storm.

When we first started living on the island, all we had to do was pay tax to the regional and municipal authorities. That’s still the case, right up to this day. But now, it’s no longer possible to build floating homes in the area. We’re the only people living in such a house in the entire region. Everyone that comes to visit us – loads of people – tell us that our house is one of a kind [Editor’s note: It’s possible to visit the couple’s home between June and September].

The lighthouse doubles as a guestroom. Photo taken by A. Fullerton and published on the Facebook page of Wayne Adams.

This initiative was reported on by our France 24 “Observers vs Climate Change” team. If you know of an initiative near where you live that’s been set up to fight climate change, don’t hesitate to get in touch with our team at obsduclimat@france24.com