Chicago mum Jeanette Taylor Ramann’s memory loss has been getting worse the longer her hunger strike continues—she also tires easily and has passed out. But Ramann, and 12 other people, who are on their 26th day of boycotting solid food in a desperate bid to save the only open enrollment school in their neighbourhood, say the risk is worth it. They say they need to ensure a future for Chicago’s black and brown children.

The dozen parents and activists declared their hunger strike on August 17 to pressure Chicago Public Schools (CPS) to reopen Dyett High School as an open enrollment, neighbourhood school with a focus on global leadership and green technology. The school -- the last public high school in the neighbourhood -- was originally closed in June. Officials cited low enrollment and poor performance and wanted to use the building for a charter school.

Dyett is far from the only school in Chicago to meet this fate. Over the past ten years, the Chicago Public school system has been systematically closing public schools and replacing them with private operators, most of which are charters. Charter schools are publicly funded but often run by private businesses. They are purposefully small and students have to apply to attend -- meaning that many local kids don’t make the cut and are forced to go to school elsewhere, causing both inconvenience and danger (in Chicago, many high schoolers are put at risk by being forced to attend schools in another gang’s territory).

On September 3, CPS rescinded the decision and agreed to reopen the school as an open enrollment high school based on the arts -- but built their plan with no dialogue with the community.

The hunger strikers vowed to continue until CPS agreed to involve the community in decisions, listen to the kind of education they think is important for their kids and let locals have a say in the choice of the principal of the new school. 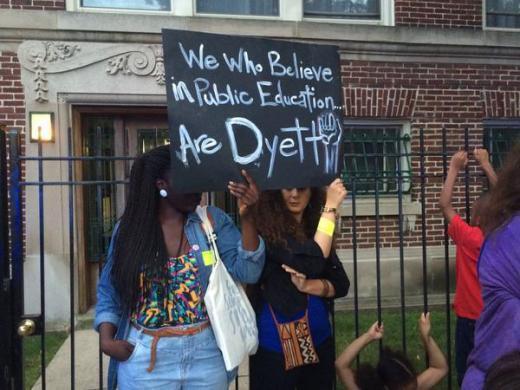 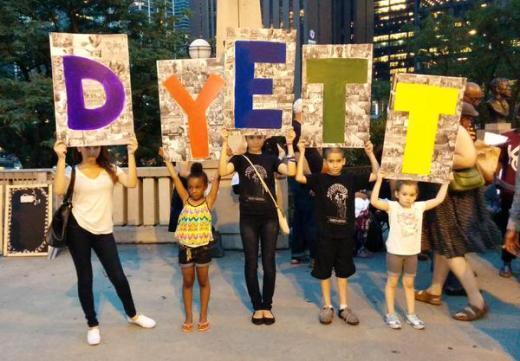 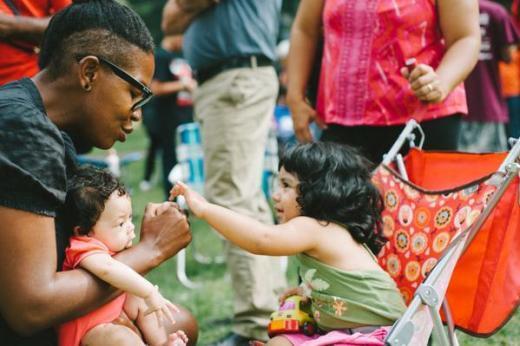 Protesters gather in support of the reopening of Dyett High School as a community-based, open enrollment school with a focus on green technology. Photo by Pidgeon Pagonis

Jeanette Taylor Ramann is one of the parents on hunger strike.

Back in 2004, then Mayor Daley launched a plan to revamp Chicago’s school system called Renaissance 2010. [Editor’s note: For-profit education companies pushed for this programme, which aimed to build 100 new charter schools and close 80 public schools by 2010.] Twenty of the 22 schools in our neighbourhood [Mid-South, which includes Bronzeville, Kenwood and Oakland] were slated to be closed. Schools were only being closed in black and brown and low-income neighbourhoods.

When CPS closes schools, they always cite poor performance and low enrollment. What they don’t tell people is that they aren’t giving the schools the resources to succeed. Dyett used to be a high-performing middle school, but the board disinvested in it with the plan of selling it to a charter or a contract school [Editor’s note: Some officials have also spoken out, saying that CPS is deliberately sabotaging public schools].

In recent years, our young people started complaining about Dyett. There were no AP classes [Editor’s note: Advanced placement, or honours classes].There were seven books in the library for 2000 kids and no computers. So of course that class performed poorly.

We got them to open Dyett back up… but they want it to be an arts school. Let’s be honest. Black and brown kids do arts and sports well, but people don’t want our kids to be leaders. The district doesn’t want to educate black and brown children.

In Chicago, there is already a massive gap in resources between rich and poor districts. The state of Illinois only pays 26 percent of the entire state school budget -- while most other states hover closer to 50%. Instead, the state relies heavily on local property taxes to support schools, thus allowing affluent districts to receive tens of thousands of dollars more per student than poor schools.

Dyett is the last open enrollment high school in our neighbourhood, but the fight is bigger than just the fight to save Dyett. What’s happening is that Chicago authorities are trying to build a Chicago that doesn’t include people like me and my children.

Martin Luther King once said Chicago is the most segregated city in America and it hasn’t changed. These days, their method is to take out stable institutions and push you out.

In the early 2000s, Chicago razed large, rundown public housing developments in Bronzeville and neighbourhoods, many in the mid-South. Most low-income residents were unable to stay in the neighbourhoods.

I have two school-age children. Mikiya’s in 8th grade and she’s the second highest student in her class, so she can get into any school. But if the neighbourhood school closes, it will directly affect my son Michael. He’s a 5th grader and he has learning difficulties that mean that he won’t be able to pass the tests to get into a good selective enrollment school. He doesn’t stand a chance unless these are sustainable community schools.

“I know what’s at stake”

At first no one paid attention. Then, on August 26, we gave a press conference with the president of the American Federation of Teachers. I passed out while I was testifying.

It was at that point when people realised how determined we were and started paying attention. I didn’t stop the hunger strike despite advice from my doctors. I know what’s at stake.

I know the decision to go on hunger strike is extreme but it comes after years of protesting that didn’t work. If I die, my children will know I died for them and for my granddaughter, who was born yesterday. We need to realise that ordinary people can do extraordinary things.

The hunger strikers have been getting increased support and publicity with supporters using the hashtags #FightForDyett, #WeSupportDyett12 and #Dyett12. 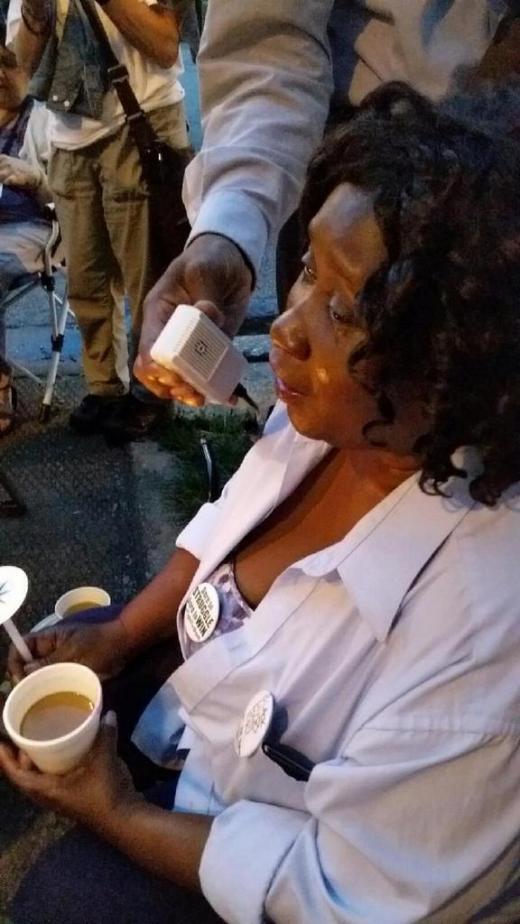