In a new play, a group of Australian Aboriginal actors dramatise the story of the 2004 death of an indigenous man in police custody to tackle the years of oppression and violence faced by Aborigines living on remote Palm Island, whose high crime statistics earned it the title the "most dangerous place outside a war zone”.

The man's death while in custody sparked unrest that both pushed Palm Island into the international spotlight and triggered a heavy police crackdown. This weekend, “Beautiful One Day” was performed there for the first time, giving actors and locals a chance to discuss openly the legacy of oppression and police violence against Aboriginal people.

Palm Island is a picturesque isle on the Great Barrier Reef in North Queensland, Australia that’s home to a 3000-strong Aboriginal population. Between 1918 to 1972, the Australian government forcibly removed many indigenous people from all over Queensland and relocated them to the island. Others were sent there after being found guilty of minor infractions. For those long years, the indigenous people living on the island faced institutional oppression and violence. The death rate was high and rule authoritarian-- until the 1970s, all residents were subject to morning role call. A peaceful strike in 1957 was crushed by Australian authorities. 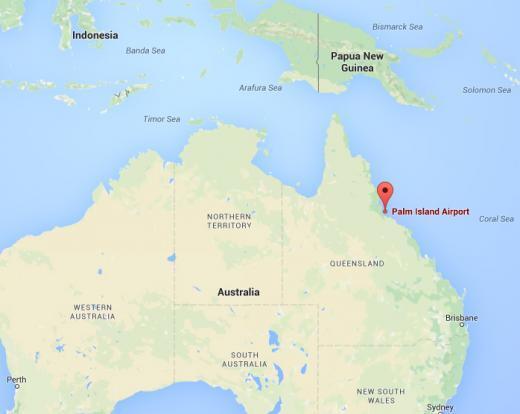 Yet this history rarely appears in modern media reports. Instead, three items appear in almost every article about Palm Island.

First, the idyllic island came to controversial fame when Guinness World Records rated it the “most violent place outside a combat zone” in 1999. Local authorities have consistently contested the title— but it stuck nonetheless.

The media tends to cite crime figures whenever it mentions Palm Island. While the island’s crime rate is undeniably high, many human rights advocates say that these figures have a lot more to do with high incarceration rates of indigenous people and institutionalized racism than actual delinquency. For example, of the 610 offences reported to have occurred on Palm Island since the beginning of 2015, 89 were for liquor. Palm Island has very restrictive alcohol laws targeting indigenous people under the highly controversial AMPs, or Alcohol Management Plans.

The island is also notorious for the 2004 incident involving Mulrunji “Cameron” Doomadgee, who died in police custody after been arrested for drunkenly swearing at an officer. Authorities claimed the death was accidental, contradicting witness accounts. While Doomadgee entered custody with no visible injuries, the pathologist who conducted the post-mortem said his injuries at time of death compared with those of plane crash victims.

When the community heard that the authorities were calling the death “accidental”, they headed to the police station to demand answers in an incident later reported as a “riot” by the media. In the resulting chaos, the police station was burnt down and later the police housing unit. No one was ever charged for these fires. Queensland authorities declared a state of emergency and flew in riot police, though many locals insist to this day that the protests were not violent and that the response was heavy handed. In the ensuing crackdown, officers allegedly pointed guns at children, dragged people from their homes in the middle of the night and used excessive force.

In 2011, actors from three different theatre companies: Ilbijerri Theatre Company, Belvoir St Theatre and Version 1.0 decided to retell the story, focusing on community voices and integrating local actors. As actress Rachael Maza said: “It soon became evident that to understand the events of 2004, you had to go back and look at the history and why and how it had been run basically as a ‘prison colony for black fullas’”. Their “theatrical documentary” tells the story of Palm Island from 1930 up to the riots, explaining the roots of violence and oppression against local people that rarely make news stories about the island.

After performing across Australia and even in London, the actors raised over $15,000 through crowd funding to bring “Beautiful One Day” to the island on September 5. 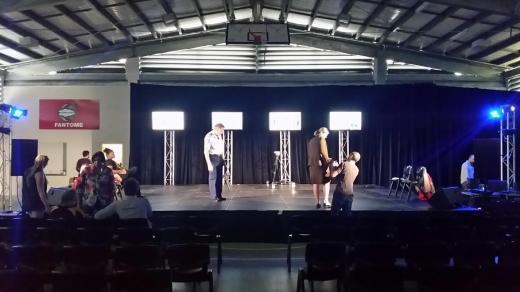 The play was performed at the Bwgcolman Community School on Palm Island on September 5, 2015 (Photo: Harry Reuben)

“I think this play also opens up the option of forgiveness”

Magdalena Blackley lives on Palm Island. She was originally brought into the project as a consultant and community liaison, but she later accepted a role in the play.

This play allowed us to take our stories off the island and bring them to the mainstream. Many Australians have no idea about the degree of segregation Palm Islanders were living with. Until the 1970s, indigenous people needed a permission slip to travel. This context is so important to understand the so-called riots: people were angry from decades of repression.

We promised the islanders that we’d bring the play back here. There will always be hurt about the death in custody, but I believe that it helps to both heal and open up the option of forgiveness when you are treated in a racist way.

“A whole row of police officers attended the show”

About 90 people came to see us perform on Palm Island, plus kids and dogs. Cameron Doomagee’s family were there. I was also surprised to see an entire row of cops in the audience—some in uniform. This shows improvements in the relationship between the community and the police—but more needs to happen. For example, police still live separate from the population in barracks surrounded by barbed wire.

Moreover, unresolved anger from 2004 lingers. Senior Sergeant Christopher Hurley, the police officer charged with manslaughter in Doomagee’s death, was found not guilty [Editor’s note: In May 2015, Hurley, who works in the Gold Coast police force, was put under internal investigation in another incident for “inappropriate use of force”]. Cops on the island during the riots got bravery awards and compensation. On the other hand, Lex Wotton, who was charged with inciting the riots, was sentenced to seven years in prison. He wasn’t even charged with burning a building—all he did was pick up a microphone and talk about justice. But when a black fellow speaks for his rights, he gets quickly shut down [Editor’s note: Wotton and others are currently leading a class action suit against Queensland over the treatment of Palm Islanders after the incident].

For a hundred years, Palm Islanders have been treated as prisoners out on some remote island where people can’t hear their voices. You have to understand the history to understand the true resilience here. In the play, we use a quote from David Bullsey, who was arrested after the riots: “Whatever happened to us, we don’t want people to feel guilty. It’s not about blame. We want people to acknowledge, understand and move forward.”

Current Queensland police commissioner Ian Stewart has been praised by Palm Island councilors for making an effort to engage the community more. Stewart has admitted mistakes were made in 2004.

"What I hope is that those learnings have made us better, and certainly I would hope we can prove to the community that we have taken those learnings very seriously," he told ABC last year.

However, concern about Australian Aboriginal deaths in custody continues almost 30 years after Australia first set up the Royal Commission into Aboriginal Deaths in Custody in 1987.

In 2012, 27-year-old Kwementyaye Briscoe died after being taken into protective custody for being drunk. He was allegedly dragged along the ground by police, who then left him alone for two hours and failed to seek medical care. In early 2015, two more aboriginal men died in custody in less than a month. 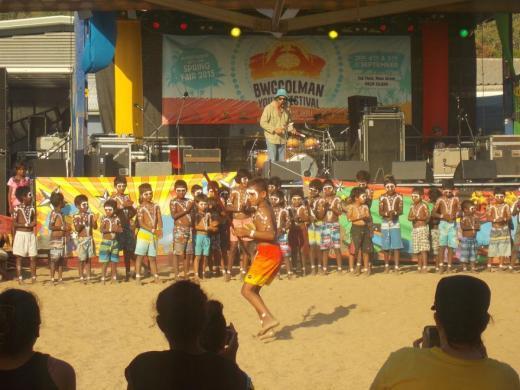 "Beautiful One Day" was performed on Palm Island as part of the Bwgcolman Youth Festival (Photo: Kamarra Bell-Wykes) 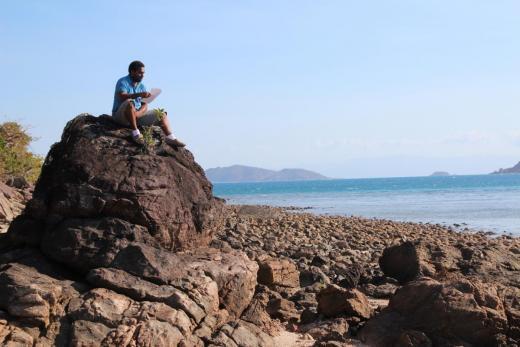