Slovenian rock group Laibach held two concerts last week in North Korea. Our Observer, who often travels to the country, described this unprecedented event, which proved to be quite festive… even if the North Koreans didn’t dance.

On the evenings of August 19 and 20, about a thousand spectators crowded into a theatre in the North Korean capital Pyongyang to see Laibach perform as part of the "Liberation Day Tour", which coincided with celebrations of the 70th anniversary of the end of the Japanese occupation and the division of the Korean peninsula into two separate countries.  It’s the first time ever that an international rock group has performed in North Korea. Up until now, only Western classical musicians had been given authorisation to perform. 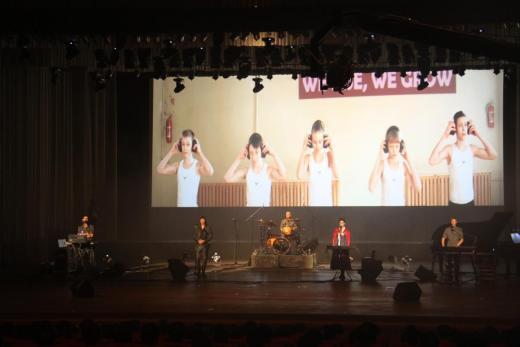 Founded in 1980 in then-communist Yugoslavia, this industrial rock group has a scandalous reputation, to say the least. Often accused of far right and nationalist sentiments, Laibach uses both totalitarian and fascist imagery in its music videos (though some analysts say that the group is making fun of these symbols) and its music is often punctuated with militaristic rhythms. “Laibach” was the name used for the Slovenian capital Ljubljana when it was under Nazi occupation.

In an interview in 1983, Laibach’s members basically said that if Hitler could be a painter, they could be fascists". 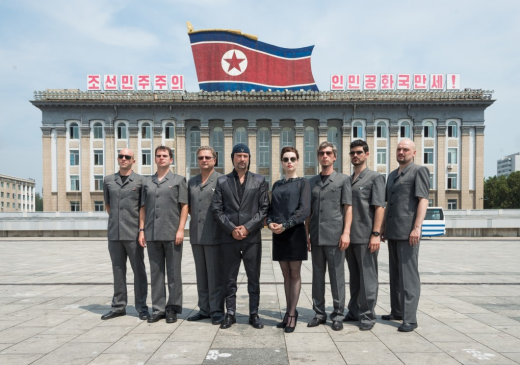 The group Laibach, in North Korea. Photo by Joerund F. Pedersen, from the group's Internet page.

"People were curious because the concert was a first"

Simon Cockerell is a British man working for Koryo Tours, a British tourist agency founded in 1983 and headquartered in China. Koryo, which specialises in trips to North Korea, organised a special four-night vacation package for the Laibach concert. The tour cost 1550 euros, not counting the concert ticket.

I went to the concert on August 19, with six tourists from Slovenia, Germany, Austria and the UK. I don’t know if the crowd had been pre-selected, but there was no ticket booth at the entrance to buy tickets. All of the concert goers arrived in groups, which is fairly common in North Korea. The crowd wasn’t limited to important party members and high ranking officials, as one might imagine. It was a very mixed audience including both students and workers. There were also about 100 foreigners who live in Pyongyang at the concert.

Unlike most concerts, there were no fans of the group in attendance. That said, people were curious. I think they wanted to go to the concert because it was a first. The music was really different from the kind of music that North Koreans are used to hearing. There is no rock at all in the country, most music is very light and melodious with patriotic lyrics. Good examples of this type of music are Moranbong Band and Wangjaesan Band. 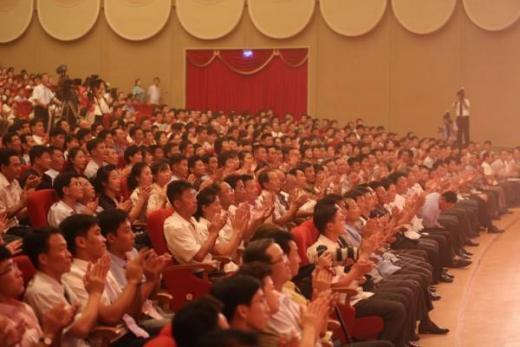 "No one knew the words to Laibach’s songs"

I think that people liked the concert, even if no one was dancing because everyone was seated. People didn’t sing along either, because no one knew the words to Laibach’s songs.

The band played "Whistleblowers", "Life is life" [Editor’s note: a “militarised” cover of a song by the Austrian group Opus], "Final Countdown" and the Beatles song "Across the Universe". They also played versions of four songs from the film "The Sound of Music" [Editor’s note: The musical is popular in both North and South Korea]. They also played "Arirang"-- a Korean folk song that tells a story of star-crossed lovers like Romeo and Juliet. It is also very popular in both the North and the South.

Laibach didn’t sing “We’re going to Mount Paektu" [Editor’s note: Before traveling to Pyongyang, the group released a cover of this North Korean propaganda song that talks about a sacred mountain where the former leader Kim Jong-il was supposedly born.]

Norwegian artistic director Morten Traavik organised the concert and it is not the first time that he has organised cultural events in North Korea. This concert was the realisation of his hard work in collaboration with some local partners. I don’t think it is a sign that the country is opening up. 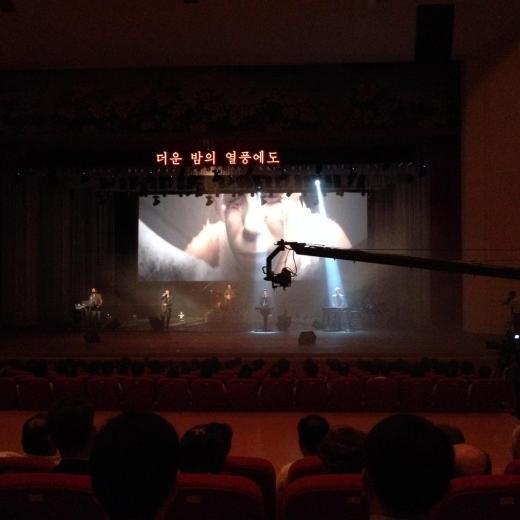 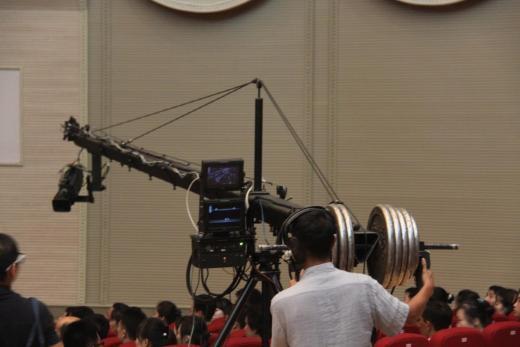 The Laibach concert being filmed, 19 Aug, in Pyongyang. Photo by Simon Cockerell.

"When people talk about North Korea, they don’t ever talk about the people who live there"

Besides the concert, our trip also included a trip to the demilitarised zone on the border with South Korea as well as important sites in Pyongyang [Editor’s note: Including the North Korean Arc of Triumph-- modeled after the Parisian “Arc de Triomphe”, statues of former leaders Kim Il Sung and Kim Jong Il, the war museum, the city metro and the American ship the USS Pueblo captured by the North Korean flotilla in 1968].

I have now been to North Korea 145 times. When we talk about this country abroad, we only talk about its leader, soldiers or nuclear weapons, but we often forget the 24 million people living there. And, honestly, what I appreciate the most is the people. Even if their upbringing is vastly different from ours, human interactions with them are possible. Since I started coming here, I have befriended several North Koreans and I talk with them about football, alcohol, love and music. It’s also possible to chat with people in the streets and in the parks, even if there are linguistic and cultural barriers as well as a definite suspicion of foreigners.

This post was written with FRANCE 24 journalist Chloé Lauvergnier (@clauvergnier).