Sargassum seaweed has been inundating idyllic beaches in the Caribbean islands for the past few years, causing a disastrous effect on tourism. On the French island of Guadeloupe, unprecedented levels of this thick, brown algae are also causing adverse effects on the health and wallets of local residents.

For the past few years, unprecedented amounts of sargassum seaweed, which feeds on waste nutrients in the ocean, have been amassing on the shores of Caribbean islands. The reason behind this mass accumulation of seaweed is cause for debate. Some say that it is a result of climate change, while others blame pollution from large-scale maritime industries operating off of the coast of Brazil. Yet others blame it on deforestation.

But the 2015 levels have been particularly alarming. This year, the algae was labelled an “unwelcome visitor” by the Caribbean Tourism Organisation (CTO). Once it is washed up and starts to decompose on the beaches, the seaweed – which is rich in hydrogen sulfide (H2S) – lets off a rotten egg smell, causing tourists to flee.

But what about the locals who are faced with the sargassum and can’t just pick up and leave like vacationers? FRANCE 24 received numerous emails and calls from Guadeloupians distressed by this problem. We bring you three eyewitness accounts from people living in some of the island’s worst affected areas.

"I have experienced temporary losses in vision and respiratory problems”

Jean-Louis Surjous, 58, lives near Galbas beach in the city of Sainte-Anne, where he owns a computer repair business. For the past three years, the area has seen frequent spikes in sargassum.

I live about 50 metres from the beach, where masses of sargassum wash up. The colourless gas that the seaweed emits is ruining our lives. All of the computer parts that I bring home start malfunctioning: the metal in the electronic components that also become dark becomes corroded and turns black. 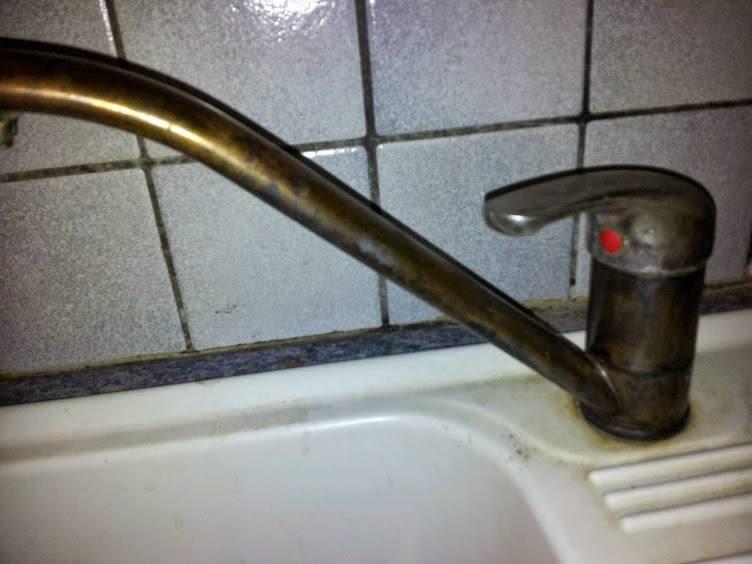 Photos of pipes at Jean-Louis Surjous’ house. The hydrogen sulfide gas released by the sargassum darkened the pipework.

I think I have lost about 3,000 euros worth of personal possessions to the sargassum gas: it ruined components in my television and my computer and messed up my air-conditioning system. A few days ago, my fridge stopped working. Not to mention my pipework, which has turned a dark colour. 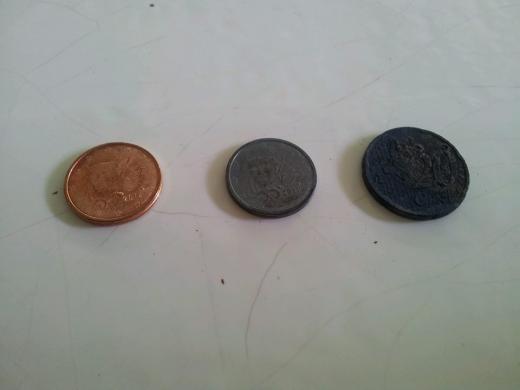 Jean-Louis Surjous put these three 5 centime coins into contact with the sargassum seaweed. The first was in contact with the algae for a day, the second for three days and the third, for a week.

But all of that is just material. My main concern is that I’ve felt my health deteriorating. I have constant headaches and waves of nausea. A doctor diagnosed temporary losses of vision as well as respiratory problems.

However, these are known short-term effects. I am even more afraid of the long-term effects of exposure to this gas: we have no idea what diseases it could cause.

The health effects caused by an extended exposure to the hydrogen sulfide gas released by sargassum are still unknown. Some residents contacted by FRANCE 24 reported liver or intestinal infections after long periods of exposure to the gas. However, no studies have yet been able to establish a firm link between the sargassum gas and these diseases. Guadeloupe’s Regional Health Agency (“Agence régionale de santé”, or ARS) is currently conducting research into this matter.

“The study will take time to carry out,” said Patrick Saint-Martin of Guadeloupe’s branch of the ARS. "But I would like to see the seaweed cleaned up before we find out whether it has health effects.”

"The sargassum might put me out of a job"

Émeline Truchet, 32, is a manager at a sailing club in Sainte-Anne.

There have been clean-up efforts on Sainte-Anne’s beach, but a lot of the seaweed was piled up not far from my sailing club. After a few weeks, we noticed that one of our two catamarans had completely fallen apart: all of the plastic had been eaten away and part of the boat was rusted. As for the catamaran that was in better shape, we had no way of getting it into the water without touching all of the algae floating near the shore.

I managed to find work on another beach this summer. But in September I have to go back to the Sainte-Anne beach, where there is still just as much seaweed.

The new sailing season starts in September, but I can’t tell my club’s members — or people who want to join the club — whether it will be possible for us to reopen or not. The sargassum might put me out of a job. 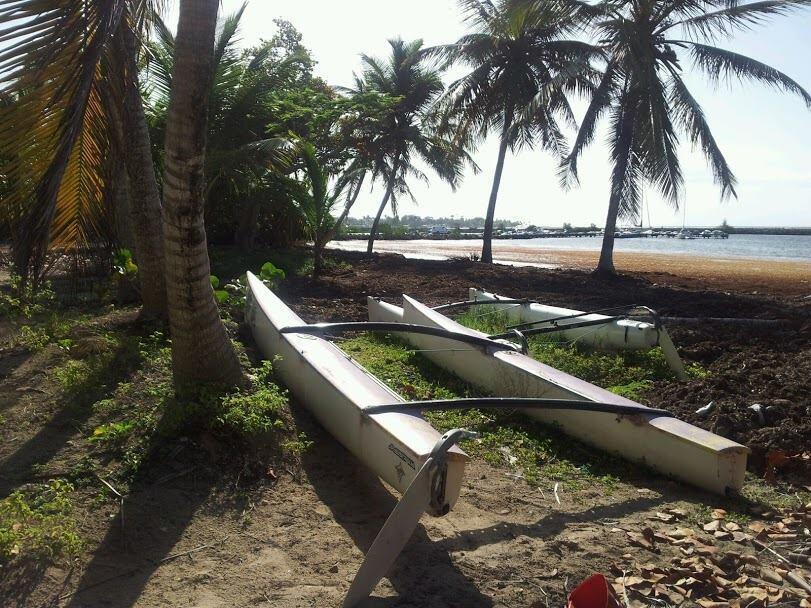 One of Émeline Truchet’s catamarans, damaged by the gas released by the sargassum seaweed. Photo by Jean-Louis Surjous.

"Who would want to eat in our restaurant if it smells like rotten eggs?”

Roméo Rambinaising is the manager of a restaurant on a beach in Porte d’Enfer, one of the areas most affected by the sargassum.

We’ve been closed since early June and we’ll stay closed until at least October. It’s a blow for us, because even if it isn’t high tourist season [Editor’s note: Tourist season begins in December in Guadeloupe], we usually have a lot of customers come around August 15, which is a national holiday.

We’ve taken at least a 50% cut in our 2015 revenue as compared to the year before — we’ll be losing about 100,000 euros. But, honestly, who would want to eat in a restaurant that smells like rotten eggs?

The authorities remained totally silent about the issue until about two weeks ago when a team of about ten people was sent to clean up the area. They were doing it all manually, without a single digger. Honestly, the response just seemed ridiculous when you consider the task at hand. 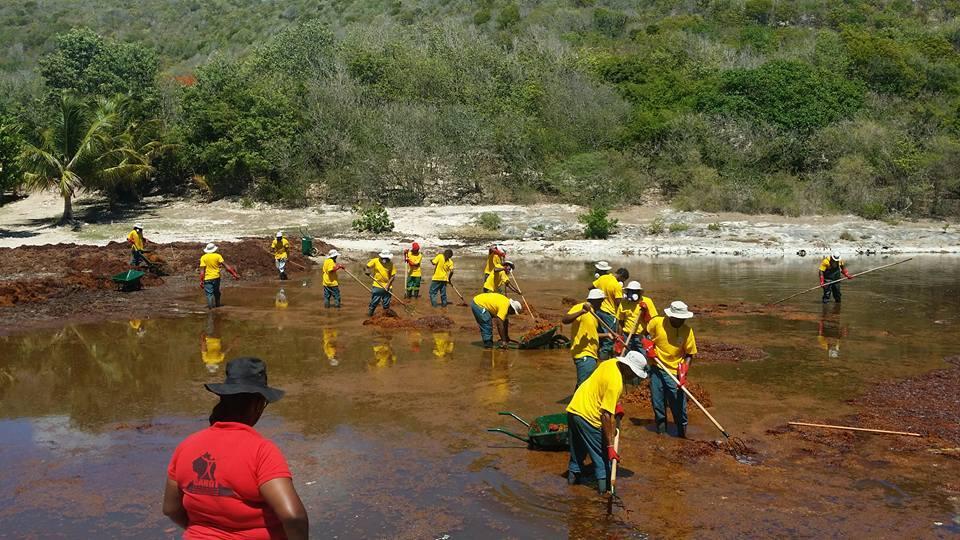 A “green brigade” was sent by the Porte d'Enfer authorities to clean up the sargassum on the beach. Roméo Rambinaising applauded their efforts, but judged the response to be “insufficient”.

When questioned about the sargassum problem, the French Minister of Overseas Departments, George-Pau Langevin, said that the sargassum situation didn’t qualify as a “natural disaster” as it didn’t fulfil the criteria required by the interior ministry. If it had that status, locals could obtain compensation and collect insurance money for damages. Still, the ministry has allocated about two million euros to launch a long-term anti-sargassum project in Guadeloupe and Martinique.

During a symposium on the sargassum problem in Barbados last week, the vice-chancellor of the University of the West Indies estimated that it would take at least 120 million dollars [about 108 million euros] and the intervention of about 100,000 people to rid the Caribbean of sargassum seaweed.

Have you yourself experienced problems caused by sargassum seaweed?

Send us your photos and share your story by emailing us at observers@france24.com !