In Chicago’s South Side, shooting deaths are all too common, especially during the summer. That’s why a group of local moms clad in pink have started “patrols” in the troubled neighbourhood of Englewood, providing advice (“pull up your pants!”), food and help as an anti-violence strategy. Englewood has seen many less shootings than usual and even the Chicago police have admitted the moms played a role in that drop.

On Sunday night, residents cowered, then rushed to their porches after all-too-familiar gunshots rang out in Englewood neighborhood in the South Side of Chicago. Between Sunday afternoon and Monday morning, 15 people were shot across Chicago, according to police reports. Chicago has 77 neighborhoods, yet at least six of the shootings (or 40%) took place in Englewood. One victim was a five-year-old girl, who was in serious condition after a bullet wound to the leg.

Englewood has consistently ranked as one of the most dangerous neighbourhoods in the USA. However, the recent shootings are unusual for this summer, due in large part to the community policing by the Mothers Against Senseless Killing (MASK).

In mid-July, police superintendent Garry McCarthy attributed the absence of summer gunfire in South Side Chicago to MASK. This gang of moms clad in hot-pink shirts have been patrolling the neighbourhood since June, armed with hot dogs and tough love. They can’t save everyone but they are definitely having an effect on the community. 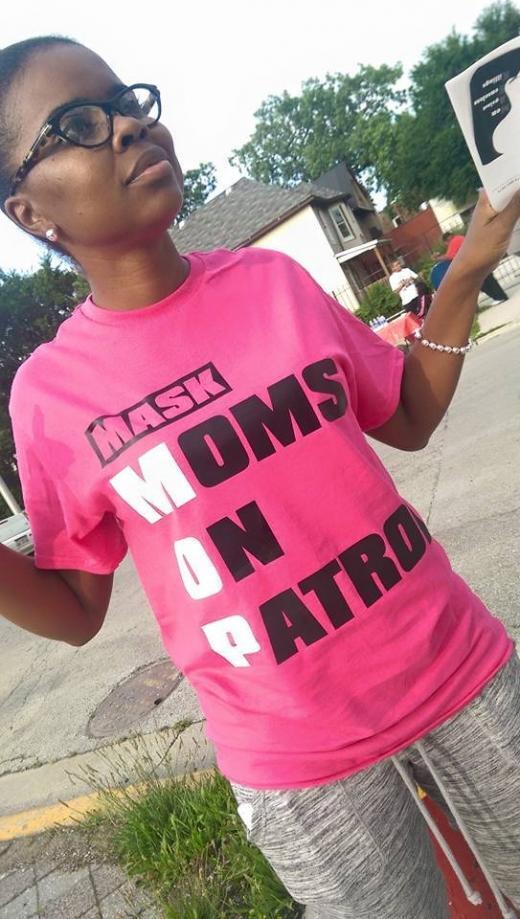 Englewood residents call the MASK moms "the pink shirts". Tamar Manasseh (pictured) said that they chose a bright colour to make their presence in the neighbourhood visible. (All photos from the Mothers Against Senseless Killings (MASK) Facebook page)

“If you don’t die from the violence, you run to escape it” 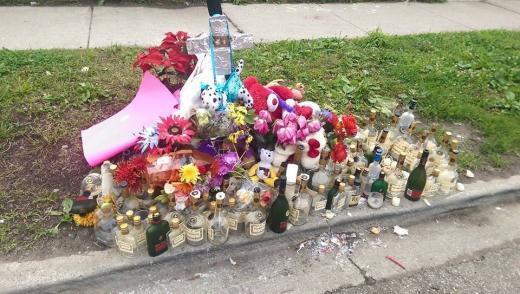 This memorial marks the spot where a young woman named Lucille Barnes, 34, was shot. The MASK moms held their first patrol on June 29 in an attempt to stop a retaliation killing after Barnes' death.

Tamar Manasseh is the mom behind the MASK. Tamar and six other moms held their first patrol on June 29. A woman had been shot there and Tamar feared a retaliation shooting. They set up on the corner of 75th and Stewart. And started cooking.

"If it didn’t work and there had been a reoccurrence of violence that night, I would have packed it up that day. But there wasn’t. So I decided to keep going.

In Englewood, there are bad schools, no nutritious food and the housing is a problem. Actually, everything is a problem. City services don’t provide the same services here as in other communities. If you don’t die from violence, you run to escape it. It’s a wasteland.

I grew up in Englewood but I decided the best opportunity for my kids would be to move out. But it hurt me to see the community suffering. I love the people here. It’s a community where children play outside and old ladies play cards on the porch. I started to think maybe they needed me.

“Our strategy is food, pure and simple”

Our strategy is food, pure and simple. Even the toughest kid will come out for free food. It’s also strategic because people have to stand around and wait for you to cook. And, while you have them there, you can have meaningful conversations. It works every time. 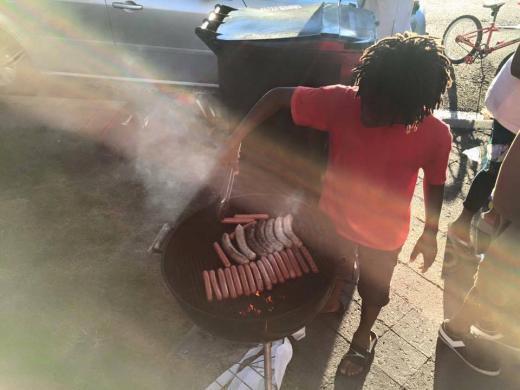 The other thing that works is consistency. We’re there every day from about 3pm until 9pm, always ready to listen.

People laugh because I will often sit there and paint my nails while keeping watch over the neighborhood. But it is a powerful symbol because it says “I am comfortable here with you. I’m not afraid of you. I trust you, I know you will not let anyone come around and cause trouble and mess my nails up.” Love is built on trust. I want them to see me as a mom or a big sister.

Another thing—you’ve got to wear the shirt, it’s a uniform of sorts. You want people to see you and to know that you are there watching. That’s why we chose bright pink. The kids call us “the pink shirts”. 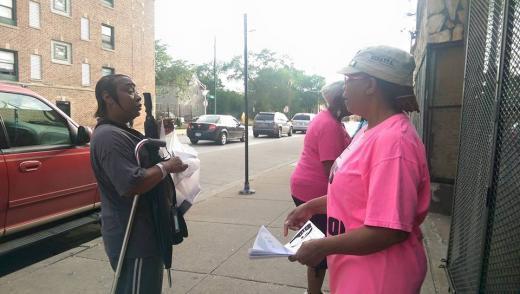 Everloyce, a member of Moms on Patrol, speaks to Englewood residents on June 29.

The safe space we’ve created is like an open-air community centre where we eat and play sports. Kids have started to gravitate towards us. Everyone from a three or four block radius comes here because it’s a safe spot. No one is going to shoot here because the kids themselves have gone to great lengths to protect us. They tell others that they can’t sell drugs or carry guns here. If you want to do something, you have to go down the street.

But we are also hearing kids confide in us and dream about other possibilities. One kid wants to make movies, another wants to be a chef. Once upon a time, gang life was the only option but now many of them are saying, “I don’t want to do that.”

What we really need is more opportunities. You can’t tell kids “don’t sell drugs” but then give them no way to make money. Their needs aren’t so big. Kids want jobs but need skills. Kids want to get gang tattoos removed. A kid has been abused by the police and wants to talk about it. Maybe a girl needs pampers for a baby. When you get into it, it isn’t about taking the guns. It’s about these back stories and what happened to make them pick up a gun in first place. 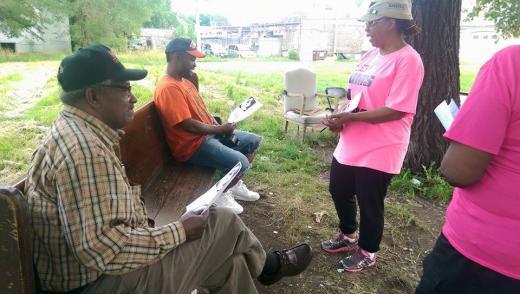 Moms on Patrol speak with residents on June 29. 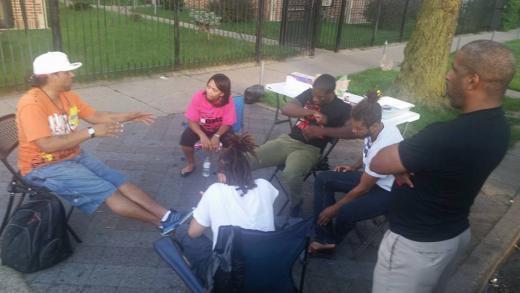 MASK members gather on an Englewood street corner on July 22.

“I wanted us to bridge between the police and community, but that isn’t possible”

I thought the kids and the violence would be the hardest part but it turns out that the police are.

We notify police officials when we do patrols and they are fine with it. But there’s a breakdown in communication with the guys on the ground. I’ve had officers threaten to “clear” me off the corner.

Once, we were singing happy birthday to a kid and an officer drove by and flipped us off. Another time, an officer accused a 14-year-old boy of saying “f**k the police!” Before we knew it, the kid was pressed against a car and four other police cars, each containing four officers had driven up. Everyone was screaming and yelling. It could have really escalated if I hadn’t diffused it. You know, an unarmed man was killed by police in Englewood just last week.

I wanted us to bridge between the police and community, but that isn’t possible. We are there to protect the community and I tell the kids that—I’m here to protect you from both yourselves and any outside enemy, including the police.

“A kid said, if you weren’t keeping the neighbourhood safe, there may have been ten shooting deaths, not one”

Every time there is a shooting, it hurts me deeply. I want to save everyone. But one kids said to me, if you weren’t keeping the neighbourhood safe, there may have been ten shooting deaths, not one. It isn’t really much of a comfort because I don’t want any, but I am proud of what we have achieved.

This programme will run through Labor Day (Editor’s note: September 7) but we are trying to organize an indoor space so we can still be a part of their lives this winter.

To hear more hopeful stories about Englewood, check out the hashtag #goodinenglewood.