Saying no to coal to save Australia’s Great Barrier Reef

In Queensland, northeast Australia, activists are fighting tooth and nail against planned coal mine development, as well as the expansion of the port from which the coal is exported. They are worried this could harm the environment, in particular Australia’s famed Great Barrier Reef. To try to halt the expansion, they are asking banks to withhold financing.

These projects are being led by the Indian mining giant Adani. In 2011, the company bought the port of Abbot Point – which specialises in exporting coal – for two billion dollars. Its plan is now to enlarge the port, so that more coal can be exported. This would involve massive sediment dredging operations near the Great Barrier Reef, which environmentalists worry could be damaged in the process.

Abbot Point port, viewed from above. Image from Google Maps.

Adani is also developing giant mining projects in the Galilee Basin, a zone spanning 247,000 square kilometres which is full of coal, petrol, and shale gas. The company is planning on building a 300-kilometre-long railway to transport its products to Abbot Point.

For the past few months, “reef defenders” have been holding meetings and conferences, collecting signatures on petitions, and filing court cases in an effort to halt these projects. These activists include environmentalists as well as members of the Wangan and Jagalingou tribes, who are descendants of Australia’s first inhabitants. 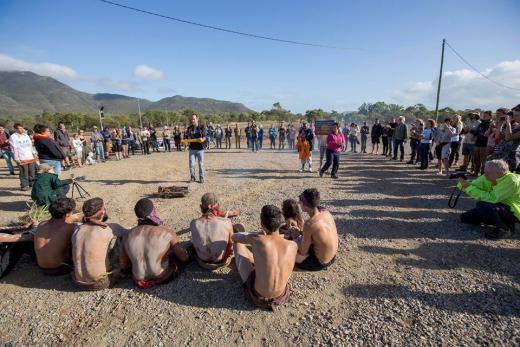 A protest near Abbot Point on June 21. Photo posted on the Facebook page 350.org Australia.

“These projects would be a disaster for the environment”

Mitch Hart, 29, is a union leader would lives in Brisbane. On July 16, he took part in a protest in front of Adani’s offices in Brisbane, alongside members of the Wangan and Jagalingou tribes.

Our message is the following: these projects must not be financed, because they would be a disaster for the environment. If we start exploiting the Galilee Basin mines, our carbon dioxide emissions will go through the roof. [Editor’s Note: If the projects go through, the basin alone will emit 705 million tons of CO2 per year, which is nearly as much as Germany, the world’s sixth biggest CO2 emitter]. This would be a catastrophe for the fight against climate change.

The expansion of Abbot Port is also a threat to the Great Barrier Reef, which is home to many animal species. Moreover, tens of thousands of people depend on the reef’s biodiversity for their employment, both in the tourism and fishing industries. The Great Barrier Reef creates many more jobs than Adani’s projects would. It is greatly overestimating its projects’ impact on the local economy. [Editors’ Note: The company said its projects would create 10,000 jobs, while an economic consultant – who was called upon in court as an expert witness – estimated that the true number of jobs created would be about 1,400].

Top crowd led by the traditional owners of the land in the Galilee. #reefdefenders #umbankable #unburnable pic.twitter.com/WfCGaDA0i1

Every year, the Great Barrier Reef attracts more than two million tourists, who bring in over four billion euros. More than 60,000 people are employed by the tourism sector.

Half of the coral reef has disappeared over the past 30 years, mainly due to the acidification of water – which is linked to climate change – but also due to pollution generated by industrial ports from which natural resources are exported, mostly to Asia.

Despite this, the authorities continue to support mine and port expansions. Queensland state authorities recently announced they had freed up financial aid for the Galilee Basin projects.

Beyond the environmental impact of extracting and exporting coal from Queensland, activists doubt that this is financially sustainable.

This protest was held at Abbot Point port on June 21, 2015. Photo posted on Facebook by 350.org Australia.

"For banks, financing Adani projects is a bad investment"

We ask international banks not to finance these projects, because they make no sense from a financial standpoint. It is quite risky to finance projects that are pegged on fossil fuels, since they pollute the environment and have no future. More and more banks are refusing to finance such endeavors. Investing in renewable energy is much more promising, and its potential in Australia is huge.

The “reef defenders” call on everyone to put pressure on their own banks. Myself, I’ve taken my money out of a bank that finances projects like this one, and moved it to another, more responsible bank. 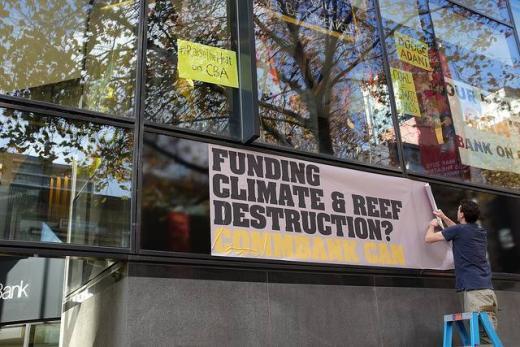 For the past five years, the price of coal has been on the decline, which worries potential investors. In April, three French banks – Société Générale, BNP Paribas and Crédit Agricole – declared that they would not finance any of the projects linked to Abbot Point or the Galilee Basin. In total, 11 international banks have ruled out providing financing to Adani.