Tens of thousands of Haitians have recently left the Dominican Republic to return to their homeland, causing scenes of chaos on both sides of the border. On June 17, a government-imposed deadline requiring undocumented immigrants to apply for legal status came - and went – leading to fears of mass deportation, a possibility many preferred to avoid by choosing to leave the country first. The mass exodus has left Haiti struggling to cope with a huge influx of people.

Tens of thousands of Haitians have recently left the Dominican Republic to return to their homeland, causing scenes of chaos on both sides of the border. On June 17, a government-imposed deadline requiring undocumented immigrants to apply for legal status came - and went – leading to fears of mass deportation, a possibility many preferred to avoid by choosing to leave the country first. The mass exodus has left Haiti struggling to cope with a huge influx of people.

Since the government's June deadline passed, more than 36,000 people have left the Dominican Republic, according to the country's immigration authorities. But the true figure could be far higher, given the lack of border controls at several crossings between the two countries.

Up until 2010, everyone born in the Dominican Republic gained full nationality rights by virtue of being born on Dominican soil. Since then, however, the granting of citizenship to the children of undocumented immigrants has ceased being automatic.

On September 26, 2013, a ruling by the country's Constitutional Court left them with even less rights than before. The decision retroactively denied Dominican nationality to anyone born after 1929 and who does not have at least one parent of Dominican blood. The judgement effectively left more than 250,000 people stateless.

The country then put in place its 'National Plan of Regularization of Foreigners', to allow the descendants of Haitians to get their papers in order. That gave them until June 17 to apply for legal status. Since the deadline passed, thousands whose applications were either rejected, or not handed in on time, have fled the Dominican Republic. 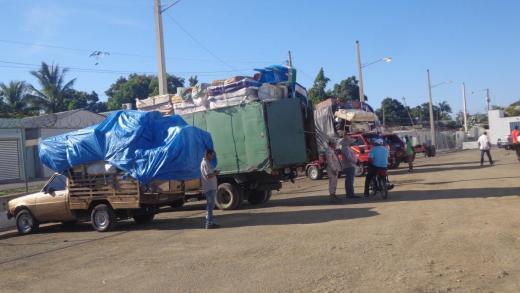 Vehicles packed with personal belongings at a border crossing between the two countries.

"Many people have taken the decision to leave now, out of fear of being forcibly deported"

Saint-Pierre Beaubrun is an organiser with the Support Group to Repatriates and Refugees (GARR), a network of NGOs created in 1991. The group brings together NGOs that support migrants in Haiti. GARR runs several offices that line the country's border with the Dominican Republic.

Since June 17, many people have taken the decision to return 'voluntarily' to Haiti. This includes many families that lived in the Dominican Republic for years. Some have told us that armed civilians had entered their homes to chase them out. That's possible, since there are ultranationalist groups in the Dominican Republic that occasionally organise anti-Haitian demonstrations [Editor's note: On February 11, a young Haitian was found hanging from a tree a few hours after an anti-Haitian protest had taken place in Santiago].

Others say that their bosses – who had no desire to be seen employing undocumented workers – pressured them to leave. Others are leaving the country simply because they've seen other people fleeing. Many are scared of being forcibly deported, because they know that they could end up losing all of their belongings or be separated from their families. So they prefer leaving themselves. Their future in the Dominican Republic is too uncertain. 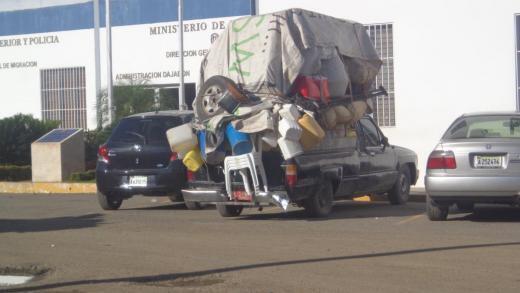 GARR hasn't seen any evidence of mass deportations since June 17. Since the deadline passed there have indeed been people who have been forcibly removed from the country, but no more than before. [Editor's note: According to RFI, dozens of people have been left by the army at the Haitian border every day since the deadline passed, although the authorities say that they still haven't begun forced expulsions].

People tend to reach the border either by bus - for those who can afford it - or on foot. For example, on July 6, nine buses all turned up at once at the same border crossing.

The problem is that Haiti still hasn't got any infrastructure in place to welcome these new arrivals. As a result, right now only three NGOs are able to help them: GARR, Haiti's Jesuit Refugee Service and the Jeannot Success Border Network. As for us, we try to give them humanitarian assistance: food, healthcare, counselling, etc. We can also shelter them in our offices, where we've put a few mattresses on the floor, for up to three nights.

Most Haitians go back to their families or the regions from which they originally came. But a minority of them stay near the border, where two or three makeshift camps have sprung up. There are around 600 to 800 people living in one of them, and roughly one hundred people in another.

It's difficult to know exactly how many people have returned to Haiti since June 17, because the authorities are only present at four of the 141 border crossings. At the outset, many of those crossing back into Haiti weren't even registered. Little by little the Haitian authorities have started documenting the new arrivals. But despite that, we're in a situation in which we don't know how many they are, where they're going. This kind of bad management will pose serious problems in the future if the government has any interest in putting in place a policy of social reintegration.

"In terms of logistics, the Dominican Republic still isn't capable of expelling people"

The Dominican Republic isn't any better organised! In terms of logistics, the authorities still aren't ready to expel undocumented immigrations, because they still need to put in place transit zones in order to carry out identity checks. That takes time. Given the state's current inability to expel them by force, they were given 15 days starting from June 17 to leave voluntarily. That period has already been extended.

Many people didn't manage to get the paperwork handed in to the PNRE before June 17, because some documents are extremely tough to obtain. For example, Haiti still hasn't provided certain documents that people have asked for, like identity papers. On top of that, applicants have to provide a residence certificate signed by seven people from the Dominican Republic. But some people only offer their signatures in exchange for money.

Since the beginning of the 20th century, Haitian migrants have made up a significant part of the Dominican Republic's workforce. They play important roles in agriculture, sugar cane fields and construction. According to the latest census, 458,000 immigrants lived in the Dominican Republic in 2012.

The 1961 Convention on the Reduction of Statelessness, which came into force in 1975, prohibits signatory states from making people stateless. Yet, although the Dominican Republic has signed the convention, it has never ratified it.