Baila Ndiaye has already built a car entirely out of recycled materials, but the Senegalese virtuoso has set himself a new challenge. He's now in the process of putting together an ultra-light aircraft using only second-hand parts with the same goal as before: to prove that it's possible "to make what we want using only what we've got".

Baila Ndiaye is constructing his plane by using second-hand parts. All photos sent to FRANCE 24 by Baila Ndiaye.

Baila Ndiaye has already built a car entirely out of recycled materials, but the Senegalese virtuoso has set himself a new challenge. He's now in the process of putting together an ultra-light aircraft using only second-hand parts with the same goal as before: to prove that it's possible "to make what we want using only what we've got".

Fifty-one-year-old Baila Ndiaye settled in France after finishing high school. He set up a company in Mulhouse that specialised in electronics, before returning to Senegal 15 years later. That’s where, three years ago, he built 'Syndiély': a single-seater car made entirely from used parts.

Building on this first success, he threw himself a new challenge. He started to build an ultra-light aircraft, before personal reasons compelled him to return to France, where he runs an engineering company in Strasbourg. However, he hopes to return to Senegal to complete his project in the near future.

"When complete, it should have a wingspan of 13 metres"

In Africa, we need more machines in order to develop. That leaves us two solutions: either buy them and get into debt, or build them ourselves with materials that we already have. That's what I wanted to do when I built the Syndiély car. I named it after the daughter of ex-Senegalese president Abdoulaye Wade, who often took part in the Dakar Rally.

When I was 6 or 7, as I didn't have any toys, I had crafted a little car using pieces of iron wire. In a way, I rebuilt the car of my childhood when I built Syndiély.

To build it, I went to ask people if they had the parts that I needed. At the beginning, they made fun of me and thought it was just a pipe dream. That's the reason why I worked alone on the project at the time. In the end, I finally managed to salvage all the materials I needed. The car and motorcycle parts came from all kinds of models and were originally headed for the scrap yard. For example, I re-used the motor of a broken motorbike, and the front axles of a Peugeot 205.

The Syndiély car during its construction in the workshops of the Thiès technical school, Senegal, whose students lent Ndiaye a helping hand.

I wanted to show that it's possible to make what we want by using only what we've got. Of course, my car isn't perfect, but people now know that we can build a car properly with next to nothing.

The Syndiély car in action.

I started building the plane by salvaging old parts just like I did with the car. When complete, it should have a wingspan of 13 metres, but the wings and the propeller still haven't been added. To take off, it'll only need a 100-metre long runway. It will be able to fly at around 100km/h, consuming five litres of fuel every 100 kilometres for a maximum flight-time of five hours. So, you could fly over 250 kilometres before having to turn around and fly back. it will also be able to take up to 200kg of weight.

I don't intend on asking for permission to fly, because I have no desire to get weighed down by bureaucracy. As for the Syndiély car, I never got it registered, but they still let me drive it.

The ultra-light aircraft under construction.

I named my aircraft 'Sakiliba', because it's the name of my deceased grandmother. She was originally from the city of Kayes, in western Mali. Whenever she was sad and homesick, she would look up to the sky and tell me how the sparrow hawks were the same ones that she had seen in Mali. Once the plane is finished, I'll make my maiden voyage by flying to Kayes in memory of her. 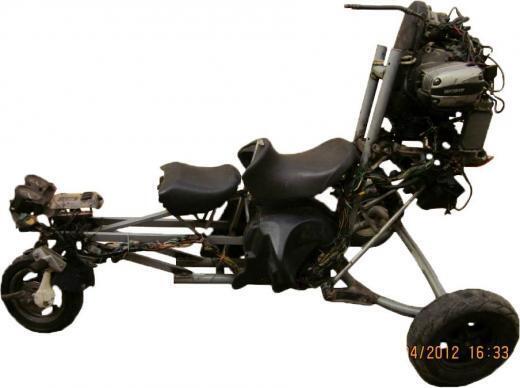 The propeller and wings have yet to be added to the aircraft.

I'd also like to build a car similar to the Syndiély car, but produced on a larger scale. I started designing a three-wheeled car that's small but big enough to carry people and goods, and reach speeds of between 30 and 40km/h. The idea is to build a low-cost car that would be affordable to more people.