Several videos of a shockingly violent scene that took place in broad daylight in north-eastern Brazil have emerged. A city security guard executed a man who was lying on the ground, already wounded and apparently unconscious, in front of dozens of witnesses, some of whom caught the gruesome scene on video. But this is not an isolated incident and our Observer says there are more and more deaths linked to police operations.

A local security guard shot this man twice in the head in Vitória do Mearim, in the Brazilian state of Maranhão, on May 28, 2015. (Screen grab of a video filmed by an eyewitness. Image blurred by FRANCE 24.)

Several videos of a shockingly violent scene that took place in broad daylight in north-eastern Brazil have emerged. A city security guard executed a man who was lying on the ground, already wounded and apparently unconscious, in front of dozens of witnesses, some of whom caught the gruesome scene on video. But this is not an isolated incident and our Observer says there are more and more deaths linked to police operations.

The incident took place mid-afternoon on May 28 in Vitória do Mearim, a city in Maranhão state. Footage filmed by eyewitnesses shows a man lying on the ground with blood all over his left arm and pooling under his head. (FRANCE 24 chose to only use screen grabs of one of the videos instead of posting it in its entirety, due to its extreme violence.) The injured man was Irinaldo Batalha, a mechanic from Arari, a town located about 30 kilometres from Vitória do Mearim. Numerous people can be seen gathered around Batalha and, in the video, you can hear them saying "he’s breathing" and "he’s alive."

The video then shows a man wearing military-issue trousers and boots approach Batalha. Though the upper half of man is out of the camera frame, you can see him put his foot on Batalha’s head. A few seconds later, he fires two close-range shots into Batalha’s head, killing him execution-style. In the video, you can hear the shocked, terrified reaction of the crowd. 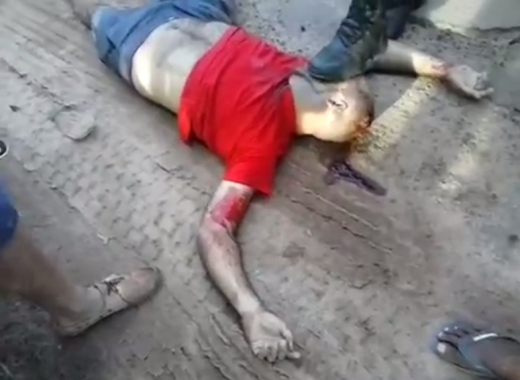 The city security guard put his foot on the wounded man’s face before executing him several seconds later. (Screen grab of a video filmed by an eyewitness.)

The Maranhão Secretary for Public Security (SSP) responded quickly to the incident, confirming that the man who killed Irinaldo Batalha was a security guard employed by the Vitória do Mearim municipality who has worked with local police.

According to the SSP, Irinaldo Batalha was suspected of having held up a local supermarket with an accomplice. The two men were said to have fled on motorcycle and allegedly exchanged shots with the police in the ensuing chase. Wounded, Batalha supposedly fell from his motorcycle, slamming his head into the ground. The SSP said the security guard then killed Batalha while the police officers were far away, chasing his accomplice.

A video contradicts the official version of events

However, a second video contradicts the official version of events. The footage shows a man wearing military-issue trousers and boots – apparently the same man as in the first video – pick up Batalha’s lifeless body with the help of a military police officer (identifiable thanks to his uniform) and a man in civilian clothes. Together, the three men hoist Batalha’s body into the back of a police car. The man in military trousers and the military police officer then get in the car and drive off.

The second video, posted on YouTube by Gilberto Léda.

When the SPP was made aware of this second video, which shows the complicity of the military police in Batalha’s death, it rescinded its first version of events. In a press release, the SPP said: “The military police has opened an investigation to clarify the role played by two of its officers, who, as shown in these images, covered up this criminal act.” Moreover, the SPP confirmed that the police were currently searching for the security guard - who apparently fled after the incident – and that “all judicial measures” would be taken to punish those responsible for the crime.

"There is often impunity in these situations"

Luis Antonio Câmara Pedrosa is the president of the human rights commission of the Order of Brazilian lawyers, in Maranhão state. He also writes a blog.

Even if the SPP revised its official version, it is still wrong for them to say with certainty that Irinaldo Batalha and his friend robbed a supermarket. The men’s families tell a totally different story. They say Irinaldo and his friend went to Vitória do Mearim on motorcycle to attend a football match. They didn’t stop at a police checkpoint because their motorcycle didn’t have a license plate. The police fired at them and hit Irinaldo, who fell off the motorcycle, hitting his head on the ground. His friend was also shot in the foot but he still managed to escape. He was later arrested. [Editor’s note: Numerous eyewitnesses also described this same version of events.] But the most worrying part is that policemen were present when Irinaldo was executed by the security guard.

I spoke with the men’s families and people who knew them in Arari. They told me that the two men had jobs and that neither of them had problems with the police. Lots of people are talking about this incident here, it’s created quite a stir.

In Maranhão, it’s quite normal for municipal employees to work with local police stations, like the security guard in this case. Sometimes, they even carry weapons, though they are not police officers and that is definitely not part of their job.

"Since the beginning of 2015, there have already been 60-some deaths linked to police operations in Maranhão"

In January, a new government took over Maranhão state. [Editor’s note: The head of local government is Communist Party member Flávio Dino, who succeeded Arnaldo Melo, of the Brazilian Democratic Movement]. Since Dino took over, around 60 deaths linked to police operations have been reported: that’s higher than last year. Numerous investigations are underway. But will they result in sanctions for the officers involved? There is often impunity in these situations…

The problem is that official discourse tends to legitimise police violence. It reflects a very conservative vision of policing, based on the idea of repression rather than prevention. Currently, security officials operate under a “zero tolerance” policy.

In Brazil, each state has its own military police in charge of maintaining order. NGOs frequently denounce the brutal methods used by this police section, especially against protesters during demonstrations.