Nepalese call for return of stolen statues after quakes

The massive earthquakes that recently hit Nepal caused the loss of thousands of lives, but they also destroyed numerous temples. In a strange twist of fate, some holy statues survived the two quakes and their aftershocks… because they were stolen and smuggled abroad several decades ago. Some Nepalese people are now calling for their immediate return.

The massive earthquakes that recently hit Nepal caused the loss of thousands of lives, but they also destroyed numerous temples. In a strange twist of fate, some holy statues survived the two quakes and their aftershocks… because they were stolen and smuggled abroad several decades ago. Some Nepalese people are now calling for their immediate return.

UNESCO reported that the earthquake had taken a "catastrophic" toll on cultural heritage sites in Nepal: 90% of seven World Heritage sites in Kathmandu Valley were destroyed, including most of their statues. However, some of these temples’ original statues were not damaged, because they are no longer in Nepal. More than 200 Hindu and Buddhist statues have disappeared from Nepali temples, fountains and sanctuaries since the country first opened its borders to tourists in 1951.

Between 1960 and the early 1990s, numerous statues were stolen and then sold to private foreign collectors. Others ended up in museums in the United States or Europe. The project "Remembering the Lost" has tracked down about 160 statues that were stolen from Nepal. According to the project's founders, the total number of missing relics – including statues and other religious items – is probably close to 1,000. 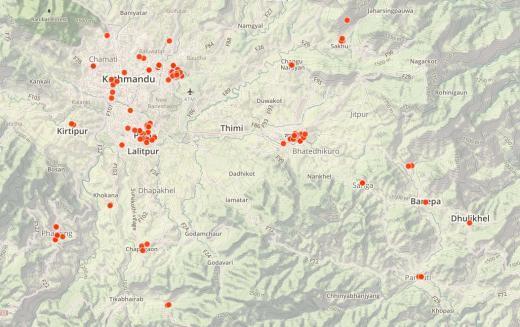 Members of the 'Remembering the lost' project, including our Observer Joy Lynn Davis, have inventoried about 160 stolen statues. This interactive map shows the different sites in Nepal that had statues stolen.

In Nepal, these religious objects are integral to the spiritual life of the community. Statues are seen as incarnations of divinities and each has a specific task: one may bring professional success, another fertility, and another might protect people from disease. When these statues are stolen, villagers often replace them with crudely-made replicas.

A 12th century-statue was stolen from this temple in Pulchowk. Photo by Joy Lynn Davis.

"After the earthquake, returning these ‘stolen statues’ would symbolise the support of the international cultural community"

Joy Lynn Davis is an American artist who splits her time between Kathmandu and California. After travelling to many villages in Kathmandu Valley, she created about 15 paintings of the holes left behind by the ‘stolen statues'. Her paintings show the empty space that the stolen statue once occupied. Then, in a haunting twist, Davis then fills the void with the rightful statue, painted in ghostly, shimmering gold.

Several hours after the first earthquake, after first helping the injured and working to free people trapped in the rubble, some Nepalese realised that bad people might try to take advantage of the chaos to steal valuable ancestral statues. So they quickly hid them in safe places. They told me that rebuilding a temple isn’t a problem. But statues — which are considered to be living divinities — cannot be replaced.

Some temples collapsed in the earthquake because their structures were already weakened by the theft of the statues — in certain cases, the stolen statues had been an integral part of the temple wall.

These Nepalese people are putting their sacred statue in a safe place after the earthquake so that it won’t be stolen, like many other statues have been in the past. Photo by Joy Lynn Davis.

The trafficking of statues is an age-old problem. Often, it’s poor Nepalis who steal them, tempted by the propositions of local art traffickers. The statues are then hidden, often in forests, before being transported abroad and sold with fake papers.

Many collectors probably have no idea that they have stolen statues in their collections. Sometimes, villagers manage to track down the statues before they are exported. One of them has been stolen 17 times, but traffickers have never managed to get it out of Nepal!

This 17th-century statue disappeared from the Vishwanath temple in Patan. Photo courtesy of the Kathmandu Valley Preservation Trust.

I don’t want these objects to fade from memory so I created several paintings that show the spaces that these objects once occupied. Then, I added the statue back into its rightful place. I painted the statues using 23 carat gold as a reference to their divine nature, but also to show how this sacred art has been commercially exploited.

This painting by Joy Lynn Davis was published on the Facebook page of "Remembering the Lost".

After the devastation wrought by the earthquakes, returning these stolen statues would symbolise the support of the international cultural community. It would be a strong gesture from collectors and museums, which currently have hundreds of these statues in their collections. The need is urgent — to help buoy the devastated tourism industry, but also for the cultural heritage of Nepal.

According to information provided by our Observer, two of the stolen statues are now in the collection of the Guimet Museum of Asian Art in Paris, though they are not currently on display. One of these statues, as seen in the image below, originally decorated a fountain in the city of Bhaktapur.

When contacted by FRANCE 24, the Guimet Museum refused to confirm if these statues were part of their collection or not. They also said: "We are not aware of any formal demand made by the Nepali government for the restitution of these objects”.