Over the past week, social media users have been sharing photos of these banners. They were displayed on April 20 in a high school in the southern city of Kairouan and two more high schools in Jendouba, a city close to the Algerian border. 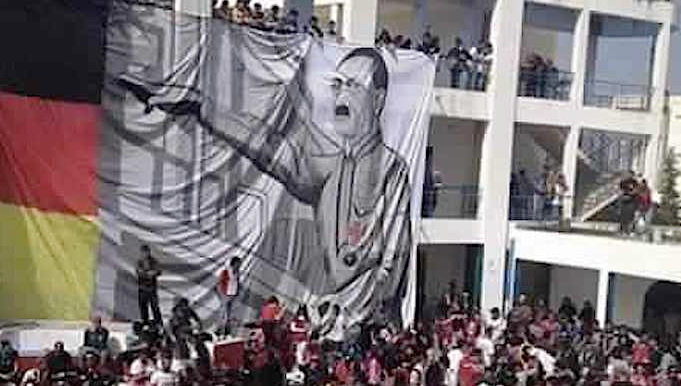 A banner showing Hitler at another high school in Jendouba.

The students who carried banners emblazoned with Hitler’s image have reportedly gone unpunished. However, Tunisian authorities briefly arrested four high school students accused of brandishing banners alluding to the Islamic State organisation. The teens were later released. One of them told radio station Shems FM that he and his friends had no connection to the Islamic State organisation and that the masked man on the banner was “just a samurai”, despite the fact that the banner showed men in bright orange jumpsuits, one of them on fire – a clear allusion to the jihadists’ victims.

When contacted by FRANCE 24, local school superintendent Mohamed Ali Oueslati supported the student’s statement. He maintained that he did not want to overinterpret the banners and preferred to believe what the students told him. “For them, the samurai is a symbol of power and these students just wanted to show that their school was better than other schools. They told me that they had no link to the Islamic State organisation.”

He did, however, say that these kinds of student gatherings were not allowed on school grounds and he called on teachers to be more vigilant in the years to come.

Video showing the festivities on April 20 at the Ibn Rachik high school. At 0'58, students unfurl a banner featuring IS jihadists.

FRANCE 24 also contacted a spokesperson for the Ministry of Education, Mohamed Haj Taieb, who sounded more concerned by the banners. He said it worried him to see such symbols appear at a high school.

“Before the revolution, high schoolers didn’t have a choice; there was only the portrait of Ben Ali hanging in the hallway”, he said. “So since 2011, they have had a tendency to let loose.”

The teachers at the high school in Kairouan did not want to respond to questions and said that the incident had been blown out of proportion.

Bilel Houla lives 200 metres from the school and knows the students from his neighbourhood well. He told FRANCE 24 that he was sure they had no links to the Islamic State group.

“Very few girls at this high school are veiled. The high school students don’t share the ideology of the Islamic State, they just wanted to show that they were stronger than their opponents — like IS fighters. I think it was also a way to attract attention and stir things up. But I don’t think they ever thought that it would blow up this much.”

The controversial banners made up only a small proportion of all banners unfurled by teens throughout the country. On the same day, for example, other high school students carried banners honouring Tunisian soldiers currently fighting jihadist groups in the mountains in the west of the country.

In this video, filmed at a high school in Ouerdanine in western Tunisia, students' banners pay hommage to the Tunisian army.