Minah Manneh, a Gambian women’s rights activist, filmed disturbing footage of a policeman caning a schoolgirl and then posted it on her Facebook page. This courageous act has forced the 23-year-old to flee her own country as Gambian law expressly forbids its citizens from uploading videos that could "tarnish the state's image". Read more...

Minah Manneh, a women's rights activist in Gambia, was forced to leave her own country after publishing a video of police brutality. Minah's so-called crime was to post disturbing footage on her Facebook page of a policeman caning a schoolgirl.

Minah Manneh, a Gambian women’s rights activist, filmed disturbing footage of a policeman caning a schoolgirl and then posted it on her Facebook page. This courageous act has forced the 23-year-old to flee her own country as Gambian law expressly forbids its citizens from uploading videos that could "tarnish the state's image".

On March 18, the young activist saw a Gambian police officer reprimanding a group of schoolchildren he had caught fighting on a public road in the country's capital Banjul. She took our her mobile phone and filmed the officer as he singled out a pupil for punishment and began to hit her with his baton.

According to Minah, nothing can justify the policeman's behaviour. The gutsy activist even challenged the officer's actions and recorded the conversation that ensued between the two.

[You can display French-language subtitles on the video below by clicking on the third button from the right, at the bottom right-hand corner of the screen]

When it became clear that the officer felt no remorse for his actions, Minah decided to post the video on her Facebook page. But she didn't stop there: she also decided to send the video directly to the country's authorities by using an instant messaging application. 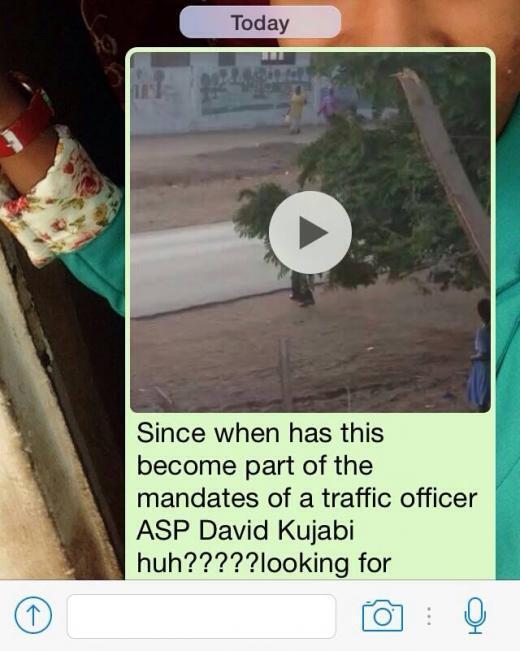 Screenshot of a message sent by Minah Manneh to Gambian authorities using WhatsApp.

When she posted the video online, the young activist broke a law ratified by the Gambian government on July 5, 2013. The law, which was roundly denounced by human rights organisations, states that any internet user responsible for:

"Spreading of false news against the government or public officials [...] will be subjected to a fine of 3 million Dalasi (approximately €64,000) or 15 years in prison."

By broadcasting a video of a policeman, a representative of the state, the young activist had put herself in the crosshairs of lawmakers. Less than 24 hours after uploading the footage, she received a call from a Gambian soldier asking her to present herself at the nearest police station to be questioned. The next day, her family reported her missing. With no word from Minah, human rights organisations joined in the search by convening a support committee and asking Gambian authorities to help find her.

On March 21, more than 48 hours after her disappearance, Minah finally posted a message that only her friends could see on her Facebook account to let them know that she was safe. She had been detained for two days. After being released, Minah had decided to leave the country to avoid being imprisoned or having to pay the exorbitant fine. She is no longer on the African continent. 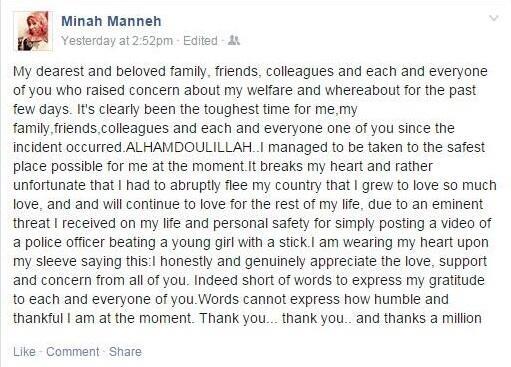 Message posted by Minah Manneh on her Facebook page telling her friends that she was safe but had to leave Gambia for her own personal safety.

Gambian authorities have 'nothing to say' about the situation

FRANCE 24 asked Gambia's minister of information and communication, Sherriff Bojang, to comment on Minah's case. This is what he said:

"The government has nothing to say about the situation, which I believe is a non-problem. Some people have the habit of broadcasting all kinds of absurd allegations in the pursuit of their own malicious interests. Gambia is a far more just society than France and President Jammeh, comparatively speaking, has done more for children's rights than any other leader in Africa and elsewhere. Statistics from the United Nations prove it."

For its part, the Banjul police service didn't respond to FRANCE 24's repeated requests for an interview.

Minah had never been directly troubled by Gambian authorities in the past, yet she is widely known for the work she has carried out in favour of women's rights with an NGO, Think Young Women. She's on the front line in the fight against female genital mutilation, an extremely sensitive subject in Gambia.

A tweet by Minah Manneh speaking out against female genital mutilation, posted on International Women's Day.

Modou Lamin (not his real name) often worked with Minah at various NGOs.

I'm struck by the courage that Minah must have had in publishing the video. Since the 'Internet law' was approved in 2013, this is the first time to my knowledge that someone has had the guts to broadcast footage of police violence. Whether it's a police officer or a parent, 'correcting' young children who misbehave is fairly common in Gambia.

She wanted to speak out against the attitude of an officer so that he would be punished, and in the end, she's the one who had to go into exile for her own security. This drama goes to show that any Gambian who tries to be a good citizen risks being penalised by the law.

When I see the flood of comments online in favour of Minah, I like to think that she's made a major contribution to the struggle for liberty and human rights in Gambia. I'm sure that other people will follow her example by speaking out against injustice.