Mexicans in shock after retired teacher's 'murder' by police

A retired teacher was killed during bloody clashes between teachers and police three days ago, in the southern Mexican city of Acapulco. Thirteen protesters have also disappeared. The teaching community is in shock, as our Observer explains.

Claudio Castillo Peña, a retired teacher, died after being beaten by police in Acapulco on February 24. Photo published on Twitter.

A retired teacher was killed during bloody clashes between teachers and police three days ago, in the southern Mexican city of Acapulco. Thirteen protesters have also disappeared. The teaching community is in shock, as our Observer explains.

On February 24, about 5,000 protesters – most of them students and teachers from Gerrero state – blocked access to Acapulco’s airport for six hours, to demand that the authorities find the 43 students who disappeared in late September. The teachers also requested payment of their salaries. Most of the country’s teaching unions were represented, including CETEG and SUSPEG. More than a thousand local and federal police officers were deployed.

Thousands of teachers blocked access to the Acapulco airport for several hours on February 24. Video published by Chilpancingoinforma.

The situation began to deteriorate in the early evening, when a bus full of teachers hit several police officers, wounding seven of them. The incident kicked off clashes between protesters and police.

One man was killed in the violence: Claudio Castillo Peña, a 65-year-old retired teacher, succumbed to head wounds several hours after he was transferred to the hospital. Many other protesters were injured, some severely. Teachers’ organizations said that the police arrested 112 protesters, all of whom have since been released.

More than a hundred teachers were arrested on February 24 in Acapulco. Video published by Chilpancingoinforma.

Meanwhile, Mexico’s Interior Ministry said in a statement that the police had “made dialogue a priority” and arrested “attackers”, without specifying how many. 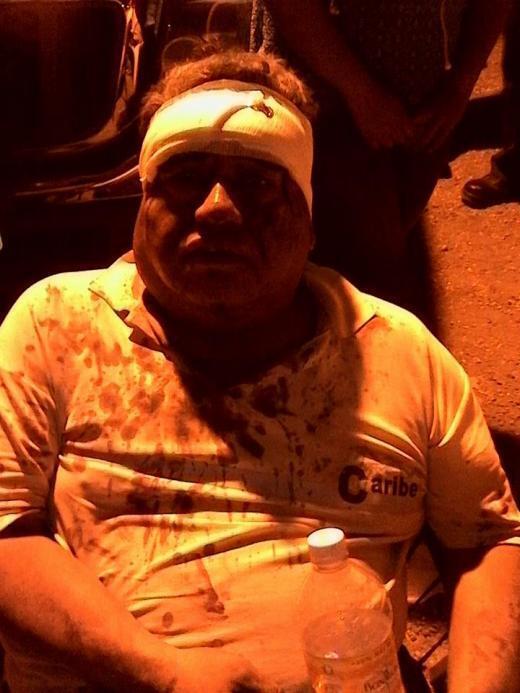 “The policemen made Claudio Castillo Peña step out of his van, and hit him with batons”

Horacio is a teacher in Acapulco. He didn’t directly witness the clashes, but collected testimony from numerous teachers the following day.

Before the bus hit the policemen, teachers standing near them heard them talking. Apparently, they were already getting ready to disperse the protesters. When the bus drove at them, a group of teachers screamed, trying to stop it... but it was no use.

After that, the police moved on the teachers. They managed to clear the access to the airport in just about 15 minutes, and in doing so shattered the windows of storefronts and cars. That may be why store owners and local residents spontaneously helped the teachers by letting them take refuge in their stores and their homes. One store owner even refused to let the police into his store. He let the teachers stay inside until calm returned, after several hours of chaos.

“He’d studied at the Ayotzinapa teachers’ college, just like the 43 students who disappeared”

Claudio Castillo Peña, the retired teacher who was killed, was in a van when the violence broke out. He’d had polio, so he had difficulties walking. However, the police made him step out of the vehicle, and hit him repeatedly with their batons. They murdered him.

He’d studied at the Ayotzinapa teachers’ college, just like the 43 students who disappeared five months ago. He was very well liked – even though he was disabled and walked with a cane, he regularly took part in teachers’ protests. He believed in actions above words. He fought for just causes, and said that learning shouldn’t be done only within the four walls of a classroom.

“Teachers said they were tortured by the police”

The day after the violence in Acapulco, we gathered testimony from many of the teachers who were arrested. Several of them explained they’d been physically and mentally tortured. One of them said that federal police officers told them “you’re going to pay dearly for this” and “we’re going to burn you”, all the while beating them. [Editor’s Note: According to CETEG, a teachers’ union, four female teachers were raped by police officers while in detention].

In total, we counted 500 teachers injured; six of them are in a serious condition. And 13 teachers have been missing since the protest. We have no idea where they are …

On February 25, a day after the bloody events in Acapulco, teachers continued their protest in Chilpancingo, located about 100 kilometers away. Some 2,000 teachers marched through the streets, some blocking a freeway for three hours, notably to denounce Claudio Castillo Peña’s killing. “Many protesters took part in the march but didn’t want to take part in blocking the highway because they were afraid of getting beaten up by police,” a protester, Alaide Martinez, told France 24. The demonstration ended in the middle of the afternoon, without any violence.

Protesters in Chilpancingo on February 24. Photo by Alaide Martinez.