Tajikistan's ruling party organised one of its final rallies last Sunday before key parliamentary elections scheduled to take place on March 1st. Yet many students and civil servants present at the meeting at a park in Dushanbe, the nation’s capital, didn't know why they had been invited there. When they finally realised it was to take part in a ruling party rally, some tried turning back... only to find the park gates locked.

A Dushanbe resident tries to leave a park in which a rally for the ruling party is taking place. Photos first published on Facebook, then on  Ozodagon.

Tajikistan's ruling party organised one of its final rallies last Sunday before key parliamentary elections scheduled to take place on March 1. Yet many students and civil servants present at the meeting at a park in Dushanbe, the nation’s capital, didn't know why they had been invited there. When they finally realised it was to take part in a ruling party rally, some tried turning back... only to find the park gates locked.

At the end of the morning, several dozen people tried to leave Poytakht park but found their route barred by locked gates. An Internet user posted photos on Facebook and claimed he wasn't aware that the rally was a political event organised by the ruling People’s Democratic Party of Tajikistan:

We got up on Sunday, the only day of rest for us in the whole week. We only understood that it was a political meeting when we saw the flyers [...] When we wanted to leave, they wouldn't let us. Some tried to climb the fence to escape... men, women and children. We were like caged animals... Is this the democracy that we're supposed to vote for? 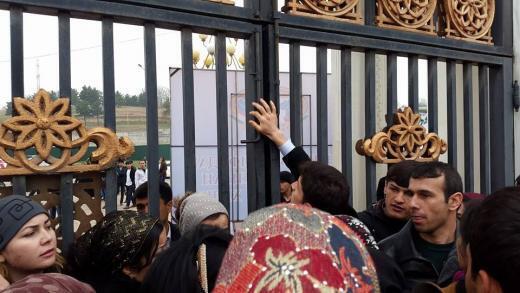 People try to leave the park, but find the doors closed. Photo first published on Facebook, then on Ozodagon.

The above Internet user has since deleted his post but his photos were republished by Tajik-language media outlets based abroad. Observers confirmed to FRANCE 24 that heads of residence halls told students from one of the city's universities to go to the park to take part in “sporting activities”. When they tried to leave the park at about 10am, they found the gates locked and had to wait another hour before they were finally opened.

According to media outlets, civil servants and public school students were also incited to come to the event. But the country's education minister insists that those who did turn up came entirely 'voluntarily'. 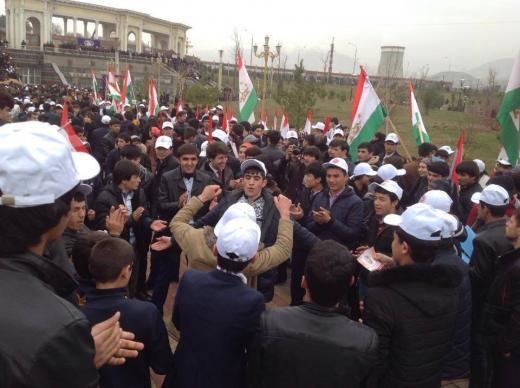 Photo taken at the rally in Dushanbe on Sunday February 22.

Doro Tadji [Editor's note: not his real name] - a freelance journalist from the capital Dushanbe - says he doesn't quite understand why the rally’s organisers felt compelled to prevent attendees from leaving.

"Like it has done every time for the last two decades, the president's party is probably going to win the upcoming election. So why did they carry out such a stunt? Perhaps they want to show that they have the support of lots of people. Maybe also because they're scared of losing some parliamentary seats during the election.

It's not the first time we've heard reports of students and civil servants being incited by their professors and peers to join the ruling party's political rallies. Some go along with it out of genuine conviction and even wear the t-shirts and hats handed out. Others do it just out of fear of losing their job or being given bad exam grades. However, this is the first time that such a case has been publically denounced by an Internet user, with pictures to prove it." 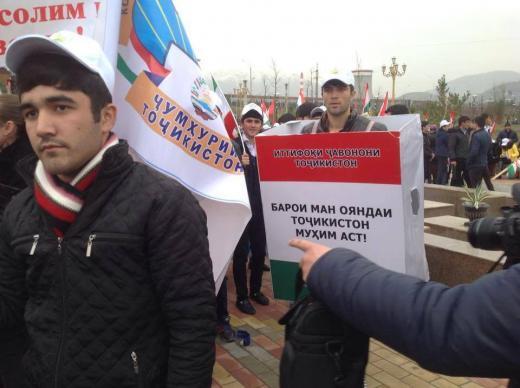 According to our Observer, students are often incited to go to political rallies in order to swell the ranks. Some go out of fear of getting bad grades otherwise.

The opposition coming under pressure: Candidates prevented from standing and 'sex scandals' on the web

The country's Islamic Renaissance Party (IRP) is gradually chipping away at the ruling party's dominance. Yet the opposition movement currently only holds two seats out of a possible 63. The rest are held by the president's party.

For the moment, opinion polls don't indicate any clear advance by the IRP. At the same time, the opposition movement claims to have come under growing pressure from the country's authorities in the run-up to March's poll. Half of the party's candidates failed the obligatory Tajik language test given to prospective election contenders. Other members have been the target of a scandalous string of 'sex tapes' published on social media networks.

Tajikistan's president was re-elected at the end of February 2013 for a fourth term in office with 83% of the vote. Observers from the Organisation for Security and Cooperation in Europe (OSCE) reported that the election lacked pluralism and choice for voters. The group also pointed out that certain members of the opposition had been prevented from registering their candidacy. Moreover, while the president was able to use public media outlets as a platform, his opponents had no such access. The four other presidential contenders - virtually unknown by the public - scraped barely 5% of the vote.