These images have sent social media accounts into overdrive. Food packages belonging to the World Food Programme (WFP) are distributed in Syria - but with Islamic State group logos. Our Observers on the ground say that this isn't an isolated case. For several months, WFP aid packages have been handed out in areas controlled by IS.

One of the photos posted by the Islamic State group on social networks. A part of the United Nations World Food Programme emblem can be seen underneath the jihadist group's logo.

These images have sent social media accounts into overdrive. Food packages belonging to the World Food Programme (WFP) are distributed in Syria - but with Islamic State group logos. Our Observers on the ground say that this isn't an isolated case. For several months, WFP aid packages have been handed out in areas controlled by IS. Read our testimony from Raqqa.

On photos posted on social media networks by accounts linked to the IS group, the jihadist organisation's logo can be seen stuck on top of the emblem of the UN agency. IS says these photos were taken in Dayr Hafir, around 50 kilometres from Aleppo. 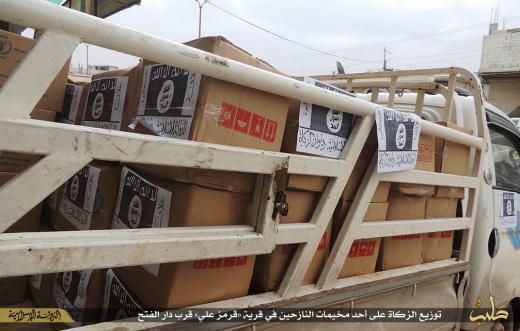 On this photo posted on Tuesday, February 3, the World Food Programme logos are covered up with IS posters.

The WFP says it "condemns the manipulation of desperately needed food aid inside Syria". It says it had delivered 1,700 food rations last August to the region, yet that barely one month later IS had seized hold of warehouses belonging to the Syrian Red Crescent - the WFP's local partner tasked with handing out the agency's aid on the ground in Dayr Hafir. According to the organisation, the aid diverted by IS could very well come from these warehouses.

The WFP spokesperson for the Middle-East, Joelle Eid, told France 24 that the organisation didn't hand out food rations in areas controlled by IS. Nevertheless, the UN agency does distribute aid to its partner in Syria - the Syrian Red Crescent - which does operate in regions controlled by the jihadists.

The Syrian Red Crescent is often accused of being close to the regime in Damascus. For several months, the aid agency has handed out WFP food rations in Raqqa, a city under IS control since June 2013. The group was also active in the neighbouring city of Tel Abyad, which has become a type of headquarters for IS since coalition airstrikes began hitting Raqqa in July 2014. But the jihadist organisation seized hold of the Syrian Red Crescent's offices on January 19 - even chasing the aid agency's employees from both cities.

We have tried several times to contact the agency to understand more about working conditions in areas controlled by IS, yet without success.

"The Syrian Red Crescent was able to hand out aid in Raqqa for a year, but they were chased out by IS"

Abou Warid al-Raqqawi is a member of the campaign group "Raqqa is being slaughtered silently".

The jihadist group seized hold of warehouses and offices belonging to the Syrian Red Crescent in Raqqa and confiscated all the aid. I'm not sure why they decided to do this, but I learnt that a new 'Emir' was recently chosen to head Islamic State group's 'humanitarian office' which directs the work of humanitarian workers in areas under its control.

IS jihadists let the Syrian Red Crescent work in the city for a year, because it was useful for them. It helped the jihadists gain the support of the city's inhabitants. The aid agency's employees never meddled in the jihadist group's affairs and they stuck strictly to IS rules. For example, there were never any women working with them and they never smoked.

The Syrian Red Crescent helped hand out food supples and treat injured people. It also distributed food provisions belonging to WFP, but only in limited quantities.

Its employees tried to organise activities for child refugees in schools, they installed water cisterns and carried out various maintenance works. They even launched blood donor campaigns to help treat children suffering from anaemia, cases of which are very common here.

The fact that they were chased out of Raqqa could be linked to the appearance of photos showing aid distribution in Dayr Hafir. Apparently, from now on the group wants aid to be handed out by people that are closer to them and can do propaganda work for them at the same time.

A report published in December by the Overseas Development Institute confirmed that international aid groups, including the United Nations, worked with local NGOs to hand out humanitarian aid to populations stuck in zones under jihadist control in Syria and Iraq. "Large NGOs work with individuals who have a good relationship with jihadist groups and who play the role of mediators in handing out aid (...) this aid is often handed out in black sacks that don't have logos," adds the study.