Giant rats are being trained by scientists in Mozambique to detect tuberculosis, the world’s second most fatal infectious disease, in a program that is believed to be less expensive and more efficient than traditional methods.

Giant rats are being trained by scientists in Mozambique to detect tuberculosis, the world’s second most fatal infectious disease, in a program believed to be less expensive and more efficient than traditional methods.

The process of training rats to detect TB has been developed by APOPO, the Belgian NGO that's best known for using rats to find land mines. The first tuberculosis tests using giant pouched rats – genus cricetomys – were carried out in Tanzania in 2002, but the technique was only adopted on a larger scale some 5 years later. In January 2013, APOPO opened a research laboratory in the veterinary school at Eduardo Mondlane University in Maputo, the capital of Mozambique. Scientists began to train the rats to use their excellent sense of smell to detect tuberculosis in samples of human spit. 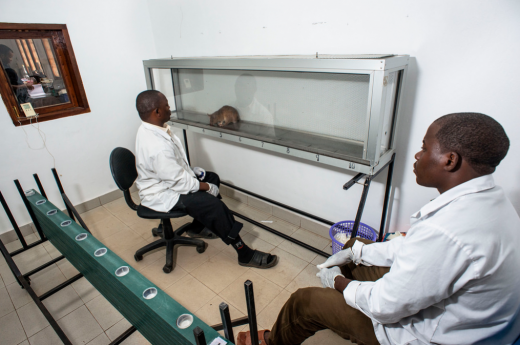 "A rat can examine one hundred samples in 20 minutes, as opposed to the four days it would take a human technician working in a lab"

Emilio Valverde is the head of the Tuberculosis Detection Programme at the veterinary school at Eduardo Mondlane University in Maputo.

In many developing countries, scientists still have to use a microscope to detect tuberculosis in a sample. It’s quite a slow process-- moreover, the accuracy rate is not that high. Even with these lab tests, we estimate that between 20 and 80% of positive cases are not identified [Editor’s note: Other sources say that an estimated 50% of positive cases are not identified]. That said, when a sample tests positive, it is usually true.

The giant rats we use to identify tuberculosis are just as, or even more, accurate. However, the main advantage to using rats is that they are up to twenty times faster. A trained rat can examine one hundred samples in 20 minutes as opposed to the four days it would take a human technician working in a lab. Moreover, rats are able to identify about 67% of positive cases on average. 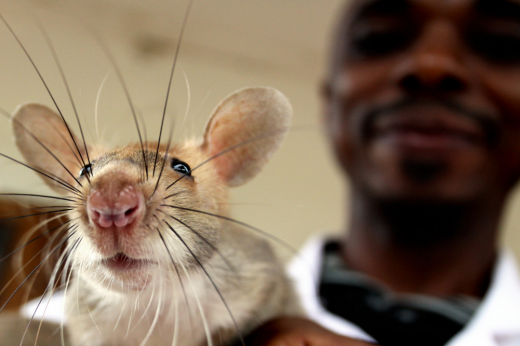 The rats’ body length (not counting the tail) is between 25 and 30 cm. Photo by Brian Johnson.

In the lab in Maputo, we have four rats working on a series of samples at the same time. When at least two rats identify a sample as positive, we consider it positive. Using multiple rats helps us to increase the accuracy of our results. We also have another group of five rats that do the same thing.

“The rats live about eight years on average so, once they are trained, they can work for a long time”

The rats that we use are about 25 to 30 cm long, without counting the tail, and weigh between 1 and 1.5 kg. They are calm and intelligent. We start training them when they are only 4 or 5 weeks old. We start by teaching them to associate certain sounds with treats, usually bananas or peanuts.

Then we train them using smells. Slowly, we give them increasingly complex exercises. Once they are trained, the rats are able to analyse ten samples of human spit at once. We place the samples side-by-side in small holes. The rats then sniff them and when they detect tuberculosis, they keep their snout in the hole for three seconds to signalise its presence. 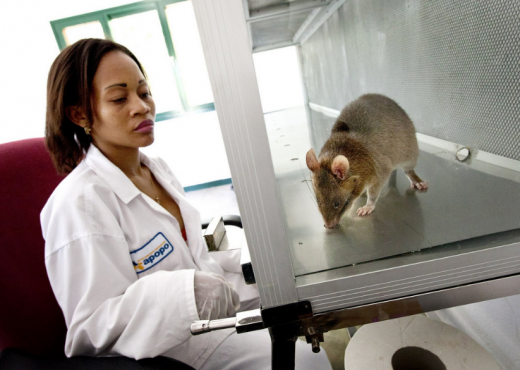 If they detect tuberculosis, the rats keep their snouts above the positive saliva sample for three seconds. Photo : APOPO.

The rats are finished with their training after about 9 months. Considering that they have an average lifespan of eight years, the trained rats can work for many years.

Since the Maputo lab first opened its’ doors, 36,561 samples have been tested. We have also found tuberculosis in up to 1,182 samples that were not identified as positive in traditionally-run medical centres. We estimate that 8,500 additional infections have been avoided thanks to our work. 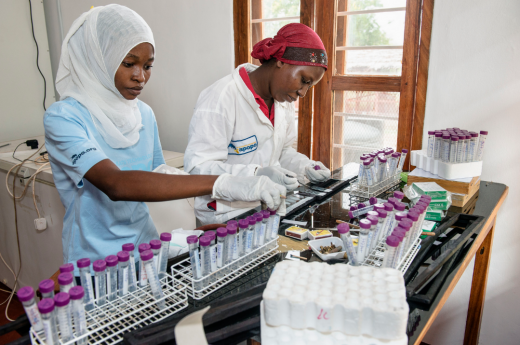 Mozambique is one of the countries most affected by tuberculosis, according to the World Health Organisation (WHO). In 2013, there were an estimated 559 cases per 100 000 people. Moreover, about 60% of those with tuberculosis are also carriers of the HIV virus. Tuberculosis is actually one of the main causes of death for people infected with HIV.

After AIDS, tuberculosis is the most deadly infectious disease in the world. In 2013, 9 million people contracted tuberculosis and 1.5 million died, according to the WHO. Most than 95% of deaths occurred in low to middle-income countries. Most instances of the disease occur in sub-Saharan Africa, where up to half of cases are never identified.

Tuberculosis is a bacterial disease that most often attacks the lungs, though it can affect other parts of the body. Tuberculosis spreads from one person to another through the air, usually through germs spread by coughing, sneezing or spitting. 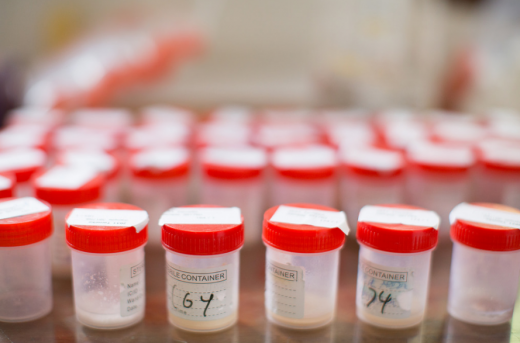 Apopo has also used rats for mine clearance in Mozambique and other countries over the last decade. Using rats has proved to be cheaper, simpler and more efficient than traditional methods, which include metal detectors or trained dogs.

This article was written with FRANCE 24 journalist Chloé Lauvergnier (@clauvergnier).