Instead of engaging in thoughtful debate, Nepal’s members of parliament elected to settle their differences by throwing chairs at each other last week. Photos of the heated parliamentary scuffle were quickly posted to the Internet as social media users ridiculed lawmakers with the hashtag #SmashChairChallenge.

Instead of engaging in thoughtful debate, Nepal’s members of parliament elected to settle their differences by throwing chairs at each other last week. Photos of the heated parliamentary scuffle were quickly posted to the Internet as social media users ridiculed lawmakers with the hashtag #SmashChairChallenge.

Nepali democracy is still in its infancy: the country has been struggling for years to put together a constitution after the monarchy was abolished in 2008. The current debate centres on the drafting of a federal constitution, which proponents say will be better able to represent the country’s ethnic mosaic.

Opposition parties – particularly those from the country’s former Maoist guerilla movements – argue that the constitution should do more to take into account those minorities historically excluded from politics. They want to see key government posts reserved for figures from fringe groups. The country’s leading party and its allies fear that carving up the country into federal regions could sap national unity and ultimately lead to the break-up of the Nepalese state.

On January 19 the first version of the proposed law was supposed to be read out in Parliament. But instead of coming to an agreement, at around midnight Nepal’s politicians came to blows. The fight left lawmakers and policemen who tried to intervene bruised and battered. One photo taken by a journalist shows a lawmaker getting ready to throw a chair. Local media outlets quickly picked up the photo. As soon as social media networks got hold of it, there was no stopping its circulation online. 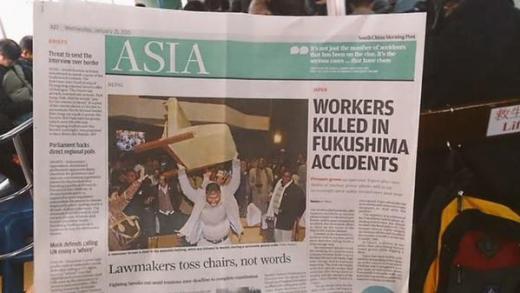 Having morphed into a symbol of failure in Nepalese politics, the photo was picked up by social media users who began sharing and parodying it with the hashtag #SmashChairChallenge. The hashtag has been used more than a thousand times in just one week. Following the example set by last year’s #IceBucketChallenge, Internet users take photos of themselves getting ready to throw a chair and ‘challenge’ friends to do likewise. 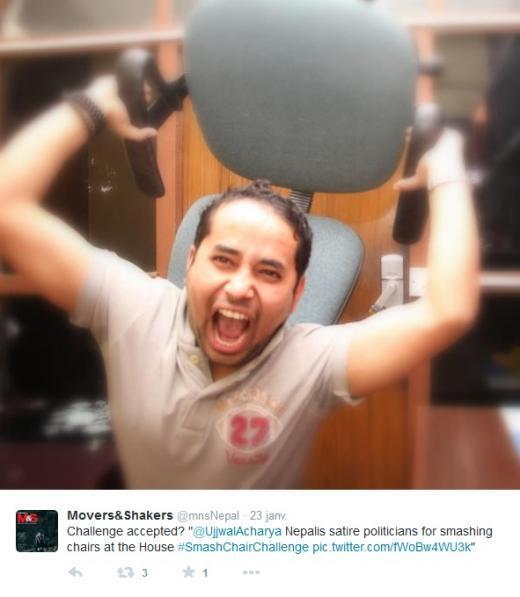 “There’s nothing political about this hashtag. We just want to draw attention to the millions of rupees that are spent”

The hashtag is the brainchild of four Nepalese friends disgusted by the attitude of their lawmakers: a management expert, a scientist, a journalist and Brazesh Khanal, a writer who agreed to explain his initiative to FRANCE 24.

When we woke up last Tuesday [January 20] and we saw the images of our lawmakers fighting in the Assembly, we were stunned. We had already seen that in other countries [in Ukraine recently, or Turkey] but we didn’t think that it could happen in Nepal, a country rather pacifist despite our differences.

We looked for a way to make it derisive. For us, this hashtag is above all a way of showing that we don’t agree with the attitude displayed by those for whom we vote and who run our country. We also want Nepal to finally get its constitution, which will only happen if these discussions move forward. Millions have been spent in order to pay lawmakers’ salaries [This amount, acording to The Himalayan Times, reportedly hovered around 780 million rupees, the equivalent of seven million euros, in 2014]. So while we pay their salaries… they go around throwing chairs!

There’s nothing political about our hashtag; we don’t take sides. I see it as a kind of ‘pacifist’ satire. We know that it’s very difficult to find a political solution, but what happened last week showed a lack of respect for Nepali citizens.

After last week’s clashes at the Assembly, parliamentary debates were promptly put on hold. A coalition representing the 11 parties that make up the majority in parliament have given themselves ten days to find a solution. On Thursday they invited the opposition to take part in the process, promising to include “some of their proposals”. A spokesperson for the Maoist opposition affirmed that it would be ready to take part, on the grounds it would be given written guarantees.

This article was written by FRANCE 24 journalist Alexandre Capron (@alexcapron).