Separatists in eastern Ukraine have begun taking their propaganda war into unchartered territory. Gruesome new footage has emerged of prisoners of war kneeling before a rebel commander who forces them to eat their army badges. Other scenes from this grisly reel are too graphic to show.

A separatist leader cuts an army crest from the uniform of a Ukrainian prisoner of war and forces him to eat it. A cameraman can be seen on the right-hand side.

Separatists in eastern Ukraine have begun taking their propaganda war into unchartered territory. Gruesome new footage has emerged of prisoners of war kneeling before a rebel commander who forces them to eat their army badges. Other scenes from this grisly reel are too graphic to show.

Pro-Russian separatists overran Donetsk’s airport last Wednesday. Up until then, a handful of battle-hardened troops – known as cyborgs - had managed to hold out and give Kiev a toehold in enemy territory. Some died, their bodies littered among the ruins of the airport terminal. Those who were captured alive have become pawns of the rebel propaganda machine.

13 people were killed the following morning when a shell ripped apart a commuter bus in the city centre. Both sides, all too predictably, blamed each other. A gruesome video was posted online just hours later -  proof that in eastern Ukraine, the psychological war is never far from the real one. The video shows the prisoners of war from the airport kneeling before a rebel chief, before being marched to the site of the bus shelling, paraded in front of Russian television cameras and pounced on by angry residents. Spliced between these scenes, grotesque images claiming to show the mutilated corpses of other Ukrainian servicemen are shown.

FRANCE 24 has chosen to show screenshots of the video and to blur the faces of the captured prisoners of war.

WARNING: These images are very disturbing. 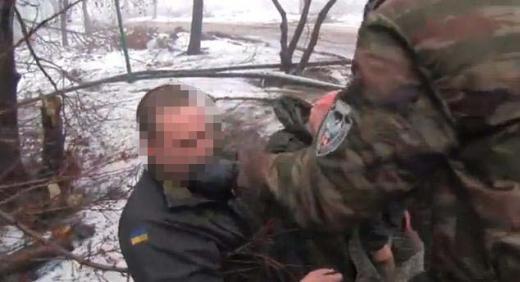 A screengrab from the video shows a separatist leader forcing prisoners of war to eat their army badges. Video uploaded to YouTube by ‘PavelDonbass’. The account's origins are unclear: it was registered in August 2013 but the first clips were only uploaded two months ago.

The first six minutes of footage were filmed in the surroundings of Donetsk airport, according to ‘The Interpreter’, in an area often used for filming war propaganda. This image - taken from Google Maps - shows a building a stone’s throw from the airport, which closely matches the white structure seen at 0:35 in the video: 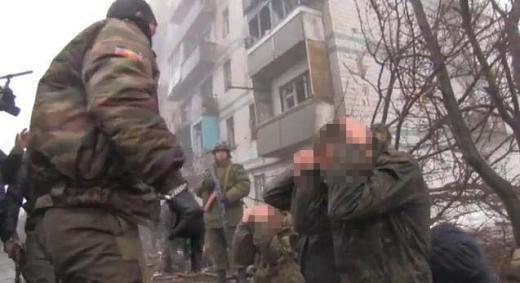 A screengrab from the video shows a white building that closely matches the structure seen in Google Maps.

Our team has analysed the key elements of the video:

The video bears the hallmarks of a stage-directed propaganda film, with rebel commander Mikhail Tolstykh cast in the lead role. At 1:48, Tolstykh - who goes by the nom-de-guerre Givi - slices a Ukrainian army emblem from each uniform and then stuffs them into the prisoners’ mouths one-by-one. The bald man in the prisoner line-up is Oleg Mitsaka, an army commander. He’s singled out by Givi, who beats him at 0:45 before shoving his bruised face in front of the camera at 4:00. 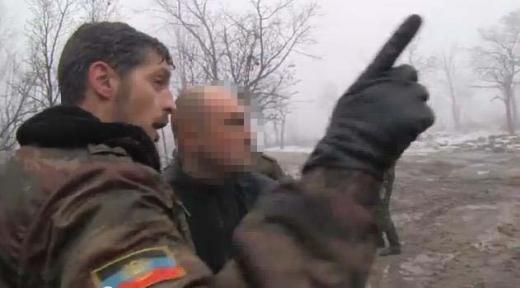 A screengrab shows a Ukrainian prisoner of war being interrogated by rebel commander Mikhail Tolstykh, who goes by the nom-de-guerre Givi.

Givi: Turn around, look that way. You have done this. I’ll take you elsewhere: you’ll see children who have lost their parents because of your strikes. Where are you from?

Givi: I promise I’ll do there what you’ve done here. I’ll come with my tanks and artillery. You’ll get to know what real hell is.

A slick editing sequence introduces the film’s next set piece at precisely 6:00 - the interrogation of another prisoner of war supposedly duped into taking part in an offensive on the airport. 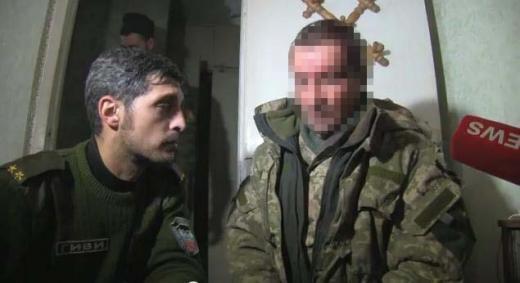 A screengrab shows a Ukrainian prisoner of war being interrogated by Givi. A Life News microphone is also clearly visible.

Soldier: We were ordered to go to Donetsk airport to collect injured troops. It turned out that there weren’t any injured soldiers there. They had sent us to take part in an offensive.

Givi: Your commander lied to you?

Soldier: They gave up on us. We refused several times to go on the offensive. If we had known at the outset, we wouldn’t have gone. I’ll never again do my military service for them. I prefer to be a prisoner.

Whether or not he’s telling the truth, his testimony could have heads turning in Kiev’s military circles. He’s then forced to speak to a journalist from Russian network Life News.

James Miller from the New York-based Institute of Modern Russia says the video sends a clear – and chilling - message.

The video fits a pattern of press releases and videos emerging from the Russian-backed fighters recently, and is a kind of psychological warfare. They’re getting more gruesome. It’s a concerted push: more of these videos have come out in the last two weeks. Prisoners are asked which units and towns they are from. They’re paraded through the streets so civilians can beat them. These are all violations of the Geneva Conventions. The message in this video and others is clear - fight for the Ukrainian military and you will be defeated, killed, or tortured.

Recently the "Prime Minister" of the self-declared "Donetsk People's Republic", Aleksandr Zakharchenko, said that his fighters will no longer take any prisoners. Does that mean he will execute them first? The separatist know that the Ukrainian forces are stretched thin. Morale is low. There are reports of defections and desertions. Videos like this are meant to intimidate Ukrainians into refusing to fight and accepting surrender.

Mikhail Tolstykh aka ‘Givi’: a poster boy for the separatists

Dozens of YouTube videos have plucked Givi from obscurity and given him pseudo-celebrity status. Many of these are produced by ‘Novorossia TV’, a YouTube channel. His star began rising after a video was posted online showing him calmly puffing away at a cigarette as shells detonated off camera. The video got nearly one million hits.

Video uploaded to YouTube showing a rebel commander who uses the name Givi smoking a cigarette while shells fall nearby.

In another interview, he reads his phone number out on camera for girls said to be eager to get in touch. Yet the same commander who shows his romantic side also hits, blindfolds and threatens captive soldiers on tape. Reports describe Givi as a former rope factory worker who served as a conscript in the Ukrainian military before he swapped sides and began dancing to a different tune. He is believed to be in charge of the ‘Somalia brigade’ in the Donetsk region.

The Russian media: ‘riding shotgun’ with the rebels?

The entire spectacle unfolds before the eyes of Russian television crews. The cameras are whirring before the captives arrive. Three of Russia's biggest television networks - Channel One Russia, Rossiya One and Life News -  are present from the outset. On several occasions, captives are shoved in front of Russian TV cameras and made to speak. 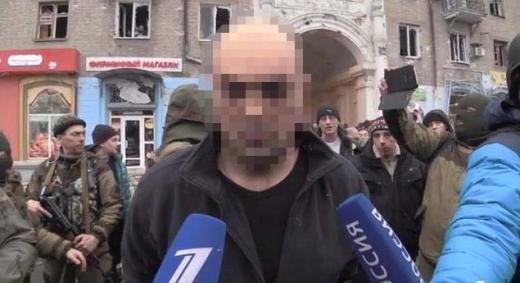 Screengrab from video showing microphones from Channel One Russia and Rossiya One at 18:55, two mainstream Russian television channels.

It’s possible that the entire twenty-minute clip was filmed by a Life News cameraman: the network’s flashy red logo overlays certain segments posted online and the red microphone continuously pops into frame. FRANCE 24 has been unable to verify this. However, the full video uploaded to YouTube by ‘PavelDonbass’ does contain both these extracts, posted to the website of Life News.

Givi told French journalist Pierre Sautreuil that Russian journalists who "support" the rebel cause are given special treatment. “It’s normal that we prefer networks that support us, ” he said. Media observers accuse Russian networks of going too far, citing the Geneva Convention that forbids mistreatment of prisoners of war. In another, infamous, video an injured Ukrainian soldier is grilled by a Life News journalist. The questions include:

How did you end up here?

What division did you serve in?

Who from your crew remained alive?

Who were you driving?

Were you alone in the truck?

Journalist or interrogator? It’s hard to tell. Yet Semyon Pegov, from the same channel, has rebutted accusations of dubious journalistic ethics: “We just broadcast what we see,” he argues in an interview given to Pierre Sautreuil. A ceasefire may have been announced, “but the war continues. That’s what we’re trying to show.”

This article was written by FRANCE 24 journalist Andrew Hilliar (@andyhilliar).