Dozens of shops owned by foreigners were attacked and looted last week in Soweto, a neighbourhood in southwest Johannesburg. The violence broke out after a youngster was killed by a Somali shopkeeper during an attempted robbery.

Soweto residents loot a grocery store owned by a foreigner while one man, perched on the roof, throws food down to the crowd. Screen grab of a video published by Eyewitness News.co.za.

Dozens of shops owned by foreigners were attacked and looted last week in Soweto, a neighbourhood in southwest Johannesburg. The violence broke out after a youngster was killed by a Somali shopkeeper during an attempted robbery.

The 14-year-old youth was shot on January 19 when he tried to rob a shop in Snake Park in western Soweto, one of Africa’s largest slums. One of his accomplices was also wounded. The incident angered the community and, by that evening, locals had began to seek revenge against foreign shopkeepers by looting their shops.

Video filmed in Soweto and published by Neo Leuuw on Youtube.

"Friends of mine, who I thought were open minded, also participated in the looting"

The wave of xenophobic violence spread to other neighbourhoods in the following days. On Thursday, Lungile Buale was in Dube Village, in the eastern part of the township, where she witnessed one of these attacks.

There were three instances of looting on a street near my home. I saw about a hundred people gathered near a shop owned by a Pakistani man that was being looted. The crowd watched and even cheered for the looters, some of whom were very young. 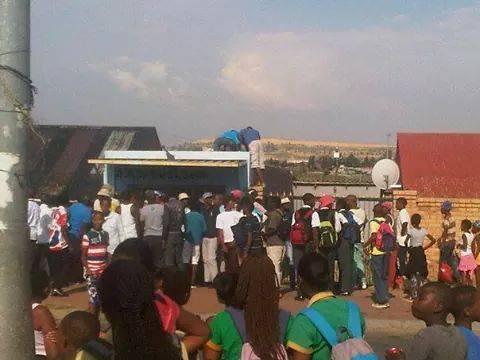 This shop is owned by a Pakistani man in Dube Village. Photo sent in by another Observer.

People were yelling “Out, Pakistanis!” and left the scene with both food and furniture. They justified their actions by saying that foreign shopkeepers had hurt “one of ours” and that they “deserved to suffer in return". Friends of mine, who I had thought incapable of partaking in these kinds of vicious acts, also took part in the looting. I felt like I was witnessing a civil war. Everyone was out of control. 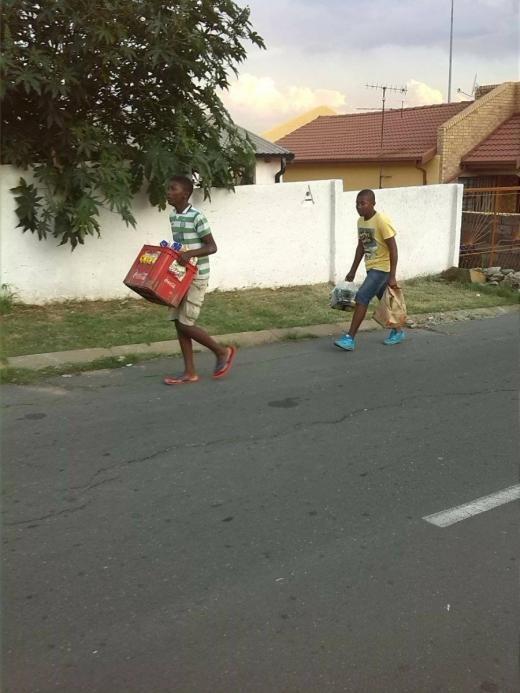 The looters took everything they could from shops owned by foreigners.

In the wake of the violence, many shopkeepers closed their shops and fled the zone while others barricaded themselves inside their homes. Two foreign shopkeepers told FRANCE 24 that the South African police had escorted them from their shops. However, even if they escaped safely from the looters, some were left with no money and no place to go. 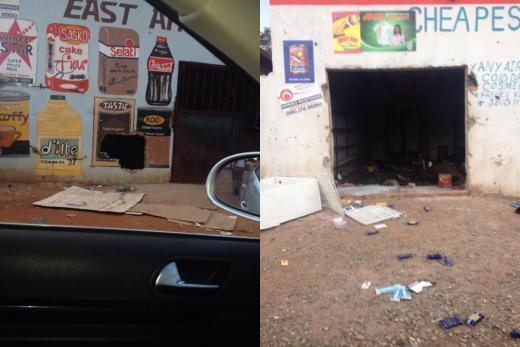 Numerous shops were damaged and left abandoned by their owners. Photo by Themba Vukeya.

While police did insure the safe evacuation of numerous shopkeepers, one policeman was captured on film participating in looting in the Dobsonville neighbourhood. Police announced Friday that he had been identified and would face criminal proceedings.

By Monday morning, 178 people had been taken in for questioning, including both shopkeepers and looters. According to a police spokesman, 11 people - including 10 shopkeepers of foreign nationality - were found to be in possession of an illegal firearm. Local journalists reported that two people had been killed in the violence that took place on January 21 and 22 [in addition to the 14 year-old whose death sparked the violence].

"Ironically, South Africans laying into these foreigners are the first to buy from them because they're so cheap"

This is not the first time that there have been clashes between local residents and foreign shopkeepers in Soweto: in 2008, a wave of xenophobic violence swept the slum, resulting in 62 deaths and hundreds of injuries. Back then, Pastor Trevor Amafu Nthlota was part of a group of mediators who helped pacify the situation. This year, he is once again working to bring calm and reason to those around him.

In 2008, we warned the authorities about rising social tensions after a series of similar attacks. After the end of apartheid [in 1994], South Africa opened up economically which also resulted in an easing of immigration restrictions. At that time, many foreigners came to South Africa to work.

But this new source of competition arrived too quickly for many of the underprivileged black communities, particularly in Soweto. The immigrants figured out rapidly how to organise amongst themselves to get products at incredibly low, incredibly competitive prices. Many of these businesses were not subject to taxes or various government inspections, unlike their South African counterparts [Editor’s note: According to other mediators contacted by FRANCE 24, most foreign shopkeepers and salesmen began by renting houses and then converting them into businesses].

Locals often look with disdain on foreign shopkeepers because, very often, they live in their shops, they don’t mix with South Africans and they don’t hire people from the local community. 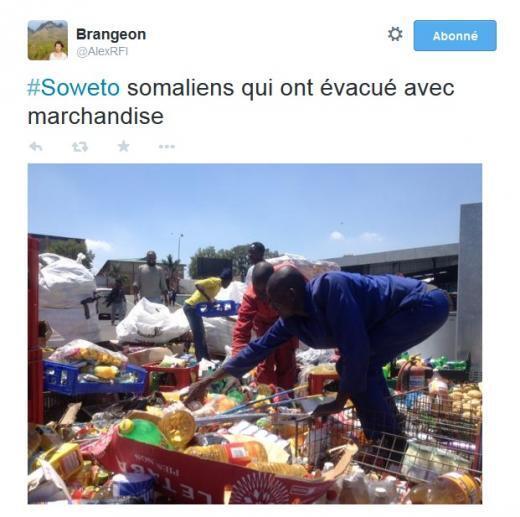 Some shopkeepers were evacuated with part of their merchandise. Photo published on Twitter by Alex Brangeon.

"The shopkeepers symbolise these people’s economic and social frustrations"

Ironically, South Africans laying into these foreigners are the first to buy from them because they're so cheap - far cheaper than South African shopkeepers.

It worries me to see that these young South Africans, who did not experience apartheid, have so much bitterness and resentment toward other communities. Many think that these foreign shopkeepers are the representation of their problems: most local residents are unemployed [Editor’s note: 50% to 65% of the population of Soweto is thought to be unemployed] and, for them, it is as if these foreign shopkeepers “stole” what work was available. Seven years later, it is clear that these economic and social frustrations are still there.

In an attempt to mitigate tensions linked to mass immigration, President Jacob Zuma established new, more restrictive immigration laws after his election last June. For example, anyone who has overstayed his residency permit can be barred from re-entry for two to five years.

This post was written with FRANCE 24 journalist Alexandre Capron (@alexcapron).