The doctors working on Ukraine’s frontline without pay, supplies

Even the hospitals aren't safe in eastern Ukraine. On Monday, a shell smashed into a hospital in Donetsk, the latest salvo in a conflict that has gutted healthcare in rebel-held territory, where doctors work under constant threat of bombardment – and don’t even get paid.

Even the hospitals aren't safe in eastern Ukraine. On Monday, a shell smashed into a hospital in Donetsk, the latest salvo in a conflict that has gutted healthcare in rebel-held territory, where doctors work under constant threat of bombardment – and don’t even get paid.

It’s been a bloodier-than-usual week for Ukraine’s war-torn east. Donetsk has been the scene of a turf battle between Kiev and pro-Russian separatists for months. On Thursday, 13 people were killed when a shell flattened a city tram stop, shattering hopes of a peace deal. As usual, both sides blamed each other but no one could back up their version of events. Just days earlier in the same city, a shell landed on a hospital – one of three medical facilities hit by rockets in the past week alone. Last week, a psychiatric hospital in the nearby city of Luhansk was also damaged by shellfire. 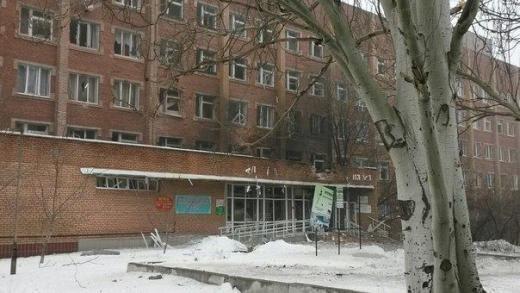 A hospital in Donetsk after being hit by a shell on Monday. Photo taken by Anton Serov and uploaded to Facebook.

As Kiev and the separatists square off with bullets, tanks and artillery, the spiraling violence has ruined the healthcare infrastructure. Not even salaries are getting through the frontlines: the government effectively banned them in its November decree. The law expressly prohibits any form of support to public services in rebel-held territory.

Despite that, so-called ‘aid’ convoys sent from Russia have got medical supplies into rebel areas. But Kiev says Moscow is using the lorry fleets to replenish rebel ranks with arms and ammunition. Human Rights Watch also accuses rebel insurgents of threatening medical staff, stealing equipment and even using ambulances to transport fighters.

"Pension payments, medical supplies, salaries for public service workers… all this has been withdrawn"

Up to half a million people once lived in Luhansk. Around half of them have now fled the city that lies in the hands of rebels hell-bent on pushing back any government offensive. Emilie Rouvroy has seen things in this front-line region go from bad to worse. As the regional project coordinator for Medecins Sans Frontieres, she’s been fighting an uphill battle to get fresh supplies into hospitals.

The biggest problem that we have seen and what I myself have seen, having visited hospitals and institutions, is the lack of medicine. If you visit the pharmacy of a hospital with 300 or 400 beds, there are just shelves with a few boxes. Doctors are expected to treat patients with hardly anything. It’s the same at the primary healthcare level - not just in hospitals.

Surgeons and doctors can’t work. There’s a huge shortage of anaesthesia. One doctor told me they needed to operate on a child but they couldn’t because they didn’t have any anaesthesia. You can operate on some adults without it because sometimes they can hold on despite the pain. But a child can’t. Chronic illnesses are also becoming more and more of an issue. This is an industrial area so lots of people work in mines and the coal industry and develop illnesses linked to their jobs. They need routine medication on a daily basis. That will have a huge long-term impact on the population’s health if we don’t receive a rapid response.

It’s the same for psychiatric drugs for patients in need of mental support. In care homes for the elderly or for mentally ill patients, people need constant medical attention. But there’s not a single drug to be found. There’s also a lack of cleaning material. Workers can’t even use basic disinfectants. Doctors are still carrying out consultations – but once they know what’s wrong they often can’t do anything. It’s always the most vulnerable people that are affected. Imagine pensioners: they normally receive state benefits. So do disabled people. Now they don’t. So they rely on community handouts. That might work for six months, but not a full year. This makeshift system could collapse at any moment. 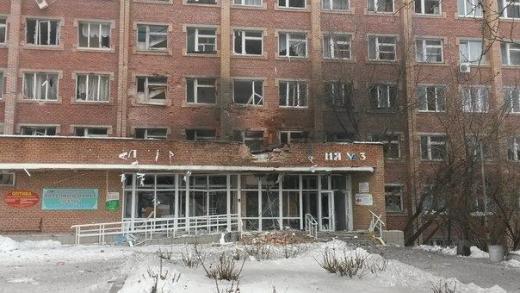 A hospital in Donetsk after being hit by a shell. Most windows have been blown out. Photo taken by Anton Serov and uploaded to Facebook.

The Ukrainian government stopped supplying medicine a long time ago. Kiev has even stopped paying salaries. That’s because in November Kiev declared that support to rebel-held areas was illegal. The reality is that doctors stopped getting salaries way before that. And supplies stopped coming in six months ago. The same goes for all support for public and social services. Pension payments, medical supplies, salaries for public service workers… all this has been withdrawn. As a result, it’s extremely difficult for us to provide aid. People are asking: where are the humanitarian workers? In some hospitals 20 percent of the staff left; in others up to 50 percent.

“Some hospitals don’t have windows because bomb blasts have blown them all out, making it extremely cold”

Since mid-January, every city that is close to the frontline has been shelled on a daily basis. Schools, houses, hospitals have been hit. Some hospitals don’t have windows because bomb blasts have blown them all out, making it extremely cold. I visited a hospital that had been bombed three days ago. The bomb landed ten metres from the hospital. The staff was frightened because it landed next to the shelter that the head doctor had installed for everyone. We had to call in psychological support for doctors because the mental stress of living under constant fear of bombardment is huge. As for questions of neutrality in treating soldiers, the doctors never ask if someone is a civilian or a soldier. As a doctor, you don’t ask – patients are patients, no matter what.

This article was written by France 24 Journalist Andrew Hilliar (@andyhilliar).