On Christmas Eve, a group of masked men picked up a municipal council member and tossed him into a dumpster in the city of Kharkov. Despite bearing witness to the surreal chain of events, the police failed to react, raising questions about the impunity afforded to certain ultra-nationalist groups in Ukraine.

A municipal council member in Kharkov, in Eastern Ukraine, is thrown into a dumpster by a group of masked men. Screengrab of the video posted below.

On Christmas Eve, a group of masked men picked up a municipal council member and tossed him into a dumpster in the city of Kharkov. Despite bearing witness to the surreal chain of events, the police failed to react, raising questions about the impunity afforded to certain ultra-nationalist groups in Ukraine.

Kharkov city council member Vladimir Skorobagach was the victim of the attack captured on video. Skorobagach is a former member of the political party of deposed Ukrainian president Victor Yanukovich, who was staunchly pro-Russian.

This amateur video was originally published online before being picked up by Russia Today.

The protesters wanted to meet with the local representative but he refused. A high-speed chase ensued and the city council member tried to seek refuge in a nearby pharmacy. Several activists entered the building to negotiate with him. When he continued to refuse to speak with them, they picked him up and threw him into a dumpster.

The police didn’t intervene because they said that this fight was between activists and politicians. The police just prevented the violence from escalating. The activists who carried this out were people closely associated with the Right Sector organisation [Editor’s note: a group of anti-Russian, Ukrainian ultra-nationalists who came together during the Euromaidan protests in Kiev at the end of 2013. They became a political party in 2014] as well as extremist supporters of the Kharkov football club [Editor’s note: Sometimes called the “ultras”]

The apparent association between the men shown in the video and the Right Sector organisation are further corroborated by another video published by the Russian radio station Svoboda. In the second video, one of the activists is seen wearing an armband in the colours of the organisation. 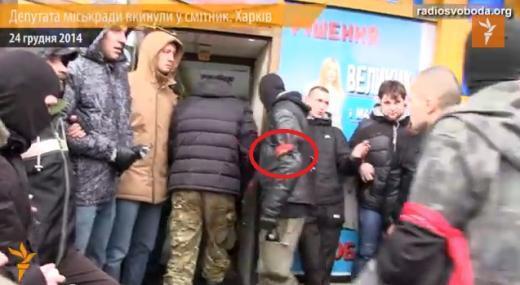 The masked man wears a red armband, a distinctive symbol of the Right Sector group in Ukraine. Screengrab of a video of the scene published by Radio Svoboda and filmed by journalist Anatolii Mazhora.

"If the police had intervened, they would have gotten on the wrong side of the pro-Ukrainians”

Taras Revunets is a Ukrainian blogger living in Kiev.

The Dumpster Challenge [Editor’s note: #DumpsterChallenge, a grassroots fight against perceived endemic political corruption] is one of the signature actions of nationalist groups like the Right Sector. They have already put numerous politicians in dumpsters [Editor’s note: Since last summer, almost a dozen politicians have been thrown into dumpsters in both Kiev and Odessa. The night before the incident in Kharkov, a similar scene took place in Ternopol]. In the video, you can hear them chanting “Lustration,” a term that refers to the cleaning up of sections of the Ukrainian government, one of the demands of the pro-Maidan protesters.

The act of throwing a politician into a dumpster is both radical and shocking but many Ukrainians support these acts because they consider that the men who end up in the trashcans are corrupt and deserve their dirty fate. That’s another reason that the police don’t intervene in these kind of situations: they are also afraid of getting on the wrong side of the nationalist groups and their sympathisers.

Last September, Ukraine's newly-elected president Petro Poroshenko introduced a law authorising a government clean-up. The legislation also sought to prevent politicians who had served in the government of Victor Yanukovich from re-entering government.

This law should technically affect Vladimir Skorobagach as he was part of the Yanukovich administration. However, Skorobagach has kept his post as a municipal council member. Today, he claims to be "pro-Ukrainian".