Life in the fast lane: the luxury cars of Gabon’s presidency

FRANCE 24 has obtained documents and photos, and conducted interviews, which show that the president’s office of Gabon owns a veritable armada of luxury cars. Maybach, Mercedes, Rolls Royce, BMW… The fleet contains several hundred fancy cars, some of which are almost never used, in a country where more than one third of the population lives under the poverty line.

FRANCE 24 has obtained documents and photos, and conducted interviews, which show that the Gabonese presidency owns a veritable armada of luxury cars. Maybach, Mercedes, Rolls Royce, BMW… The fleet contains several hundred fancy cars, some of which are almost never used, in a country where more than one third of the population lives under the poverty line.

FRANCE 24 notably came into possession of a sales contract dating from January 2010, four months after Ali Bongo became president. The order, which the president’s office made through a Swiss company called SDP Service, comes up to 14,882,000 euros (more than $18 million). The contract lists 29 luxury vehicles, including two Maybach 62S (worth 496,000 euros each), two Rolls Royce Phantoms (431,800 euros each) and two Rolls Royce Ghosts (265,000 euros each). 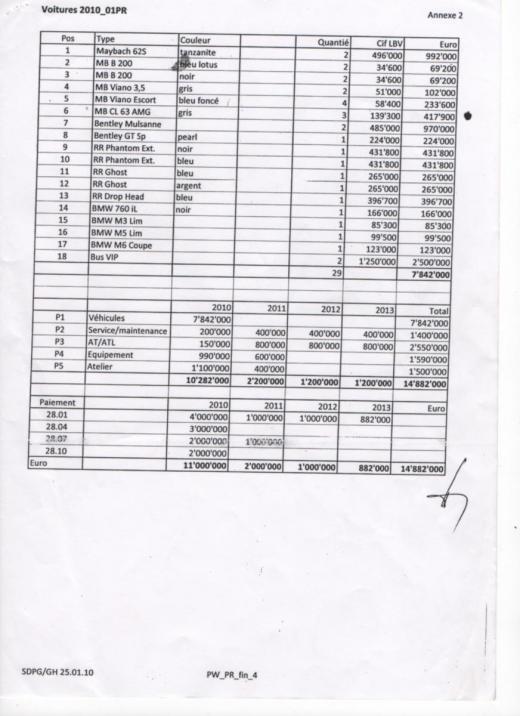 One of the pages of the contract for the sale of vehicles to the Gabonese president's office. Document obtained by France 24.

The contract does not indicate who will be using these cars and in what context. However, a former employee of SDP Service und Logistik in Gabon, who wishes to remain anonymous, told FRANCE 24 that the president regularly takes some of these cars out on the road for high-speed rides, with his bodyguards driving behind him. This was confirmed by other local sources.

In 2012, part of the fleet of cars belonging to the president’s office and some cars belonging to other ministries were stored in a parking lot in the Cité de la Démocratie, a vast complex that includes the president’s office. At the time, more than 400 luxury vehicles were stored in the 1,000 square metre parking lot. These cars were bought under Ali Bongo’s presidency, as well as under his father, Omar Bongo, who ruled Gabon for 41 years until his death in 2009. “Ali Bongo didn’t even know what cars he had”, the former SPD employee says. FRANCE 24 was able to obtain photos of several of these cars (see below).

The cars belonging to the president’s office were bought through the Swiss company SDP Service und Logistik, who in turn sometimes ordered them through another Swiss company, S-Tech. SDP, which closed shop in 2013, had headquarters in Bottighofen, Switzerland; its leadership was Austrian. Its owners, however, were unknown, and its website contained very little information. When SPD closed, another company, located in London, took over, according to the former SDP employee.

As part of an inquiry into potentially illegally-acquired assets, French authorities are also investigating the alleged use of luxury cars by the president’s entourage in France. These cars were allegedly bought in France, with Gabonese taxpayers’ money.

This lavish spending didn’t start with Ali Bongo. His father, Omar Bongo, was known for his expensive tastes. Things could change, however, if the Gabonese authorities’ latest declarations are to be believed. According to the government, a vast operation was launched in January 2014 in order to rein in public spending and break with the bad habits of the past, when, in the words of  Jean-Fidèle Otandault, the head of Gabon's public spending watchdog, “half of the [state’s] budget simply vanished”.

FRANCE 24 contacted the Gabonese authorities for comment. We will publish their answer as soon as we receive it.