Hundreds of monks all across Cambodia started marching five days ago in order to convene in front of the National Assembly in Phnom Penh on Wednesday, which is International Human Rights Day. However, their quest to protest human rights abuses is provoking the ire of police and authorities.

Monks continue on their peace march along National Route 2 towards the capital Phnom Pen (Photo taken on December 9, near Takeo and posted to Twitter by @licadho)

UPDATE (Dec. 10): The marchers succeeded in reaching their final destination, the National Assembly. They were able to deliver their petition.

Hundreds of monks all across Cambodia started marching five days ago in order to convene in front of the National Assembly in Phnom Penh on Wednesday, which is International Human Rights Day. However, their quest to protest against human rights abuses is provoking the ire of police and authorities.

International Human Rights Day has become a significant event for campaigners to draw international attention to Cambodia. The country has a dirty history of human rights violations under the rule of the Cambodian People’s Party, which has been in power since 1979 and controls almost all television, radio and print media.

Violence against protestors and the opposition flared up in 2013 when they contested the re-election of Prime Minister Hun Sen, who has been in power since 1985. In early 2014, the government launched a vicious crackdown on protesting garment sector workers. 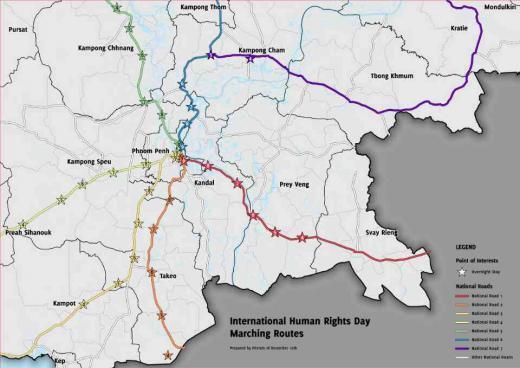 A map of the different routes taken by the monks as they travel on foot to the capital to celebrate International Human Rights Day. (Photo from our Observer). 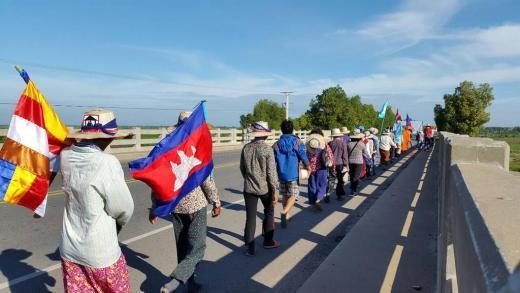 Marchers walk single file along National Route 1 so the police cannot accuse them of causing a traffic jam. (Photo posted by @licadho)

Ngim Phan Saosamkhan is a monk. He has a degree in political science and is participating in the International Human Rights Day peace march.

We started the march on December 4 in the north of Cambodia, very far from the capital city. We’ve travelled almost 580km by foot since then.

We are one of six groups planning to meet in front of the National Assembly on International Human Rights Day. In our group, there are about 35 monks and about 160 ordinary people, many of whom are villagers from the highlands in the north. These people are one example of why we are marching: their land is being stolen, their homes are being burned and these people are suffering [Editor’s note: Global Witness reports that, in the past 15 years, the government has seized 45% of the nation’s land and leased it to private investors who want to exploit the timber, minerals and petroleum.]

They came here to tell their stories, to tell the world that the Cambodian government doesn’t respect their rights. 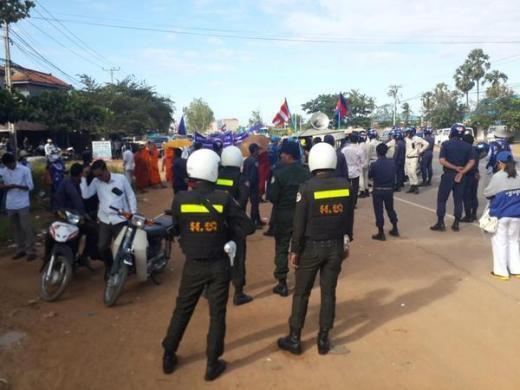 Police stop a group of monks and their supporters on December 9 from continuing towards a large protest to be held in the capital city the next day. (Photo posted to Twitter by @morysar)

“We try to explain to the police that we are not part of the opposition, we are peaceful”

During our march, we have had a lot of trouble from the authorities. For example, we are supposed to eat and spend the night in Buddhist temples along the way. These temples belong to our people, they are for the monks to stay in, but the police have blocked their entrances on several occasions.

They have weapons and they are very rude to us. People are scared of them because, in Cambodia, people kill people very easily. If you stand up to them, they may use their guns.

The police accused us of being part of the political opposition. We tried to explain to them that we are monks, so we can’t be politicians. We are independent, we work for human rights.

When they blocked one of these temples, we stayed calm and we went to see the temple owner. We said to him, “This is your temple. It doesn’t belong to the authorities, so stand up for your rights.” We are working for people to stand up for those rights because the government doesn’t want us to talk, to speak or to walk. 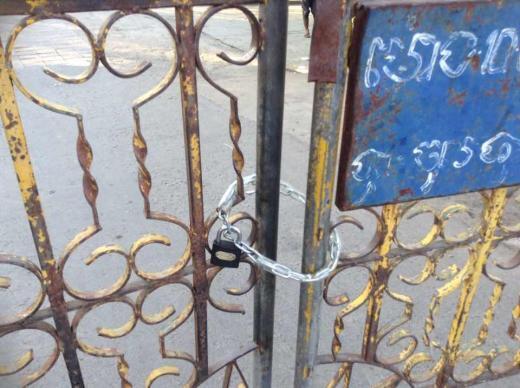 Upon arrival at Wat Stung Meanchey, where they were supposed to stay the night, one group of marching monks discovered the gates locked (photo posted on Twitter by @licadho)

The police have also blocked our path in the road. Once, they told us “you can go by tuk tuk or bus, but you can’t walk” because it would apparently cause a traffic jam. But the real reason is that they are scared that people will talk about the government problems.

We are not angry and try to speak to them with kindness. Even if they are scary, we smile at them and we actually pity them. They don’t have a good job to do like we do. We have very beautiful work. We may be monks but we are also human beings and we ourselves are Cambodian people. We can’t watch suffering. So our aim is to teach people about human rights. Cambodia is very uneducated, so as we travel, we have been passing out information about human rights abuses to local people and telling them about it. In the evenings, we pray together and hold meditation sessions. 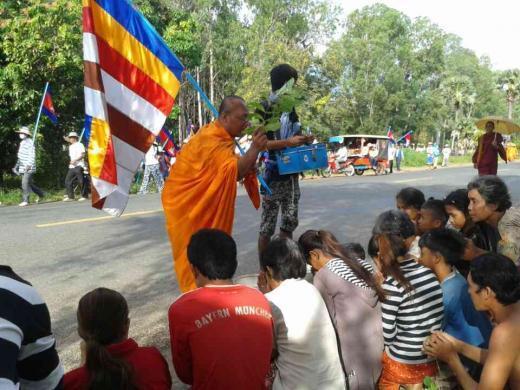 “If they block us, we’ll just stop and start celebrating human rights”

We just arrived in the capital and tomorrow [Wednesday] is our last day, when we will meet the other groups at the National Assembly. Honestly, I think that the police will block us again. If they do, we will just stop and celebrate human rights right there, wherever we are blocked.

We want international human rights groups to notice and to understand that, in Cambodia, the government doesn’t respect rights. Otherwise, Cambodia will be lost.

“This is not a protest, it is education”

Moses is a human rights campaigner. He has helped to organise events planned to celebrate International Human Rights Day in Phnom Penh. He joined the march Tuesday and will march with the monks to the culmination of the peace march Wednesday.

We are definitely seeing increasing support from local people. The pagodas [temples] are built and supported by local members of the community. One night, when the local people saw the authorities blocking the temples, they intervened and, finally, the authorities let the monks enter. On other occasions, local people took the monks into their homes. 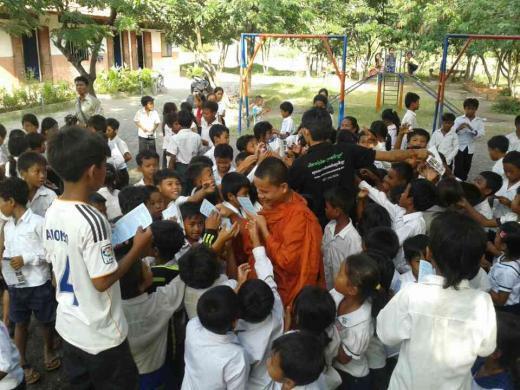 Monk and an NGO worker hand out information about human rights to children along National Route 4 on December 6. (Photo posted on Twitter by @licadho)

We are turning in a petition to the National Assembly on Wednesday. In it, we are asking for the release of several imprisoned human rights defenders [Editor’s note: Eleven protestors were arrested and sentenced in summary trials in November.] However, we have also collected information about how the authorities have been treating us during this journey. They don’t want people to gather. They say what we are doing is not included in a law authorising peaceful protests because we did not ask permission. But this isn’t a protest, it’s education.

Alongside the grand finale of the peace march, there are also many other activities happening in the capital to celebrate International Human Rights Day, including ceremonies and speeches at different locations.