The Ukrainian female suicide bomber who never was

This young woman’s photo has been making the rounds on Ukrainian social media sites since the end of November. The girl pictured is supposedly 16-year-old Valeria Liakhova, who became a symbol of bravery for the pro-Russians in eastern Ukraine after allegedly carrying out a suicide attack on a Ukrainian tank. But there’s a problem. In reality, the girl in the photo had nothing to do with any suicide attack. In fact, she is alive and well.

A photo of a young woman named Polina K. from Krasnodar, Russia was used to represent Valeria Liakhova, who supposedly died during a suicide bomb attack carried out against Ukrainian soldiers in eastern Ukraine. Photo blurred by FRANCE 24, originally shared by Stopfake.org.

This young woman’s photo has been making the rounds on Ukrainian social media sites since the end of November. The girl pictured is supposedly 16-year-old Valeria Liakhova, who became a symbol of bravery for the pro-Russians in eastern Ukraine after allegedly carrying out a suicide attack on a Ukrainian tank. But there’s a problem. In reality, the girl in the photo had nothing to do with any suicide attack. In fact, she is alive and well.

According to accounts published on Vkontakte, the Russian equivalent of Facebook, which were then widely shared on Twitter, Valeria Liakhova is a young woman who sacrificed herself for the pro-Russian cause at the end of November in Lysychansy, a city near Lugansk. Internet users said that the girl in the photo attached three grenades to her waist and threw herself under a Ukrainian tank in order to save pro-Russian soldiers.

Enter StopFake.org, a website specialising in the verification of information about the conflict in Ukraine. The StopFake team discovered a comment posted on November 30 by the girl in the photo – whose real name is Polina K. – saying that she was extremely frustrated to see her photo tied to this story. 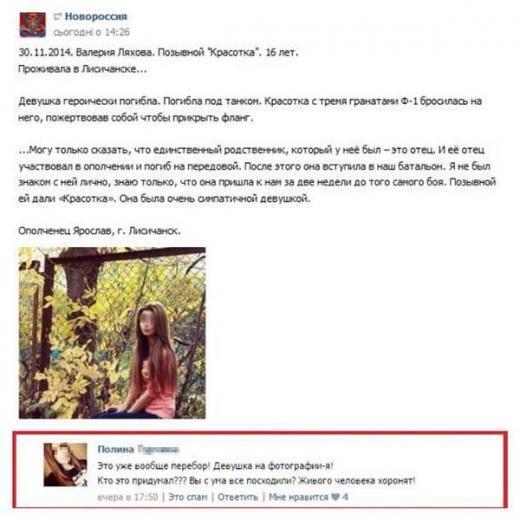 The story of Valeria Liakhova was shared on this Vkontakte page alongside Polina K’s photo. Below, the real Polina K. wrote (in Russian): "You’ve gone too far! The girl in that photo is me! Who invented this story? You are going crazy! You are burying someone who is alive and well!”

Nineteen-year-old Polina, who is from a Russian town 450 kilometres south of Lugansk, immediately deleted the photo from her Instagram and Vkontakte accounts. However, when we looked at other photos posted on Polina’s Instagram page, we could see that she was, indeed, the girl being passed off as “Valeria.”

StopFake explained that this story of a young female suicide bomber was first shared by Yaroslav Voskoyenko, a Ukrainian teenager who fought with pro-Russian rebels in eastern Ukraine and who has since died. Before his death, Voskoyenko was quoted in an article on Russian website 36on.ru talking about a “heroic act” carried out by "Valeria Lyahova, nicknamed ‘the beautiful one’ […] whose father was killed in battle and who sacrificed herself while blowing up a tank with three F-1 grenades.” But there was no photo illustrating the story he told.

While it remains incredibly difficult to verify this story about a female suicide bomber, weapons specialists who work with StopFake told the team that it would be “almost impossible to stop a tank with an F-1, which is an anti-personnel fragmentation defensive grenade". 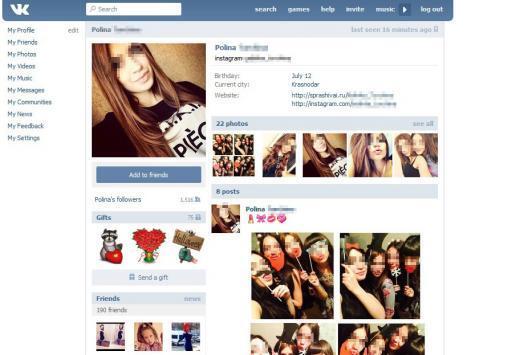 Polina K.’s photo, which was later used to illustrate the female suicide bomber story, was first published on her Vkontakte page (screengrab.) The 19-year-old is from the Russian city of Krasnodar.

"The Russian media rarely publishes corrections for their errors, even when we prove that they have published false information"

According to Margo Gondar, a co-founder of the website StopFake, this is not the first time that a story of a martyr for the Russian cause has turned out to be false.

Last June, the story of Oleksandr Skriabin made the front page of the Russian media. He was called a hero and his photo was shared widely after he, too, supposedly threw himself under a Ukrainian tank. When we looked into the matter, we were able to confirm that the photo was indeed of a man named Oleksandr Skriabin… but that he had died in 2011… 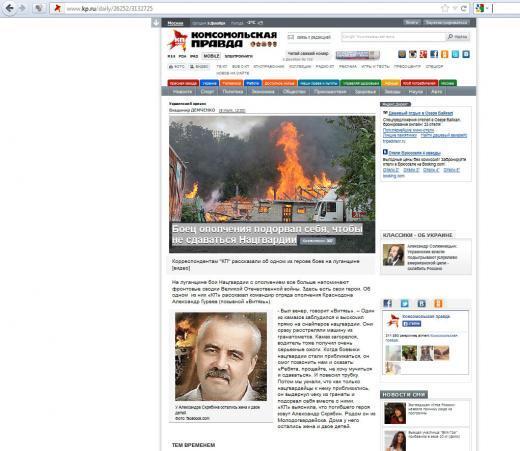 The website kp.ru ran the headline: “A militiaman blows himself up to keep the Ukrainian National Guard from advancing” alongside the photo of Oleksandr Skriabin. While this man is a real person, comments left by friends on his profile page on Odnoklassniki.ru show that he died in September 2011. However, the article with the erroneous photo is still online.

One of Oleksandr Skriabin’s friends commented in Russian on September 29, 2011: “You will stay in our memories for the rest of our lives.” Another comment, posted on February 9, 2012 says “Thoughts for Sacha [a nickname for Oleksandr] who died on September 29, 2011. Your friends and family miss you.”

While StopFakes’s co-founder admits that both the pro-Ukrainian and pro-Russian camps spread false information, she added:

The most clear-cut attempts to spread disinformation, especially in terms of false images, come from the Russian side. For example, the Russian media said this photo showed dead Ukrainian soldiers, but, in reality, it is a photo of American soldiers buried in Afghanistan. Another example is this photo of human bones, which was said to show the remains of Ukrainian soldiers eaten by dogs. In reality, it was taken in Haiti.

We’ve noticed that in almost 100% of cases, when we report a false image or a fake story published by the Ukrainian press, they immediately publish a correction. For example, in August, the Ukrainian TV channel Inter broadcast a video supposedly filmed in Donetsk showing military operations using Russian vehicles. In reality, the footage was taken in June in Lugansk. The channel immediately apologised for this error.

This is almost never the case with the Russian media. Very often, they don’t even respond to our investigations. They go so far as to persist in disseminating false information.

According to the UN, an average of 13 people per day dies in the fighting in eastern Ukraine. According to the last official figures, 4,300 people, including many civilians, have died in the conflict.