‘Anti-fascist’ and ‘anti-immigration’ groups face off in Dresden

For the past seven weeks, activists protesting Germany’s immigration policy and the spread of Islam in the West have been marching each Monday in Dresden, a city in eastern Germany. In response, counter-protests have been organised to denounce rampant xenophobia. As tensions between the two groups increase, the situation is quickly heading towards a face-off.

Anti-immigration protesters. Screen grab from a video by Filmproduktionen.

For the past seven weeks, activists protesting Germany’s immigration policy and the spread of Islam in the West have been marching each Monday in Dresden, a city in eastern Germany. In response, counter-protests have been organised to denounce rampant xenophobia. As tensions between the two groups increase, the situation is quickly heading towards a face-off. Read more…

Only about a hundred participants came to the first protest organised seven weeks ago by the group calling itself “European Patriots against the Islamisation of the West” (or PEGIDA). Since then, the movement has quickly gained momentum, with an estimated 7,000 people attending the protest held on Monday. However, the opposition to these far right gatherings has also been gaining in numbers. On the same day, 1,200 people, most of them left-wing activists, joined a counter-protest.

“The PEGIDA capitalises on people’s fear of refugees”

Frank Olfmann (not his real name) has already participated in three anti-PEGIDA protests in his hometown of Dresden.

The PEGIDA movement is made up of neo-fascists who are part of the National Democratic Party of Germany [Editor’s note: a far-right, nationalist party] as well as bikers and hooligans. There are also some unaffiliated participants. On Monday, at least half of the PEGIDA protesters seemed to be prepared for clashes. Some of them were wearing leather gloves, for example.

It’s hard to know exactly when the PEGIDA first began. About a dozen people founded this movement. The leader, Lutz Bachmann, served two prison sentences in the 2000s.

The anti-PEGIDA side is made up of quite a few far-left activists, like the "antifas" [Editor’s note: A nickname for the anti-fascists], who also sometimes turn to violence. On Monday, for example, they threw butyric acid [Editor’s note: a substance the produces a nauseating odour] along the route taken by the PEGIDA activists. But there are also non-violent protesters, who just want to show that they do not agree with the PEGIDA’s ideas.

The PEGIDA does not represent the majority opinion in Dresden. But some people are afraid that asylum seekers will cause an increase in crime if they move into their neighbourhoods. That’s the main reason that so many people have taken to the streets with PEGIDA. This movement capitalises on people’s fears about refugees to spread racist ideas. The PEGIDA also claims to fight radical Islam. However, according to the Federal Office for the Protection of the Constitution [Editor’s note: Germany’s domestic security agency], there are only about a hundred radicalised Muslims in Saxony [Editor’s note: the German federal state where Dresden is located]. But most of the people protesting don’t know that.

“In the past few weeks, I’ve heard my co-workers making inappropriate comments about foreigners and refugees”

Timm Eisenberg, 34, has lived in Dresden for the past two years. On Monday, he participated in an anti-PEGIDA protest for the first time.

In the past few weeks, I have a lot of trouble tolerating the prevailing climate towards foreigners. Even at work, I’ve overheard my co-workers making inappropriate comments about foreigners and refugees. I participated in the protest because I wanted to show that not everyone thinks in the same way.

At one point during the protest, there were only about 15 metres between the PEGIDA activists and the anti-PEGIDA activists. The most radical protestors on each side clearly wanted to let rip at each other, so the police had to intervene. There were several hundred policemen deployed to prevent possible clashes. Even so, the press reported that one anti-PEGIDA activist was injured.

In the past year, there have been numerous protests against the influence of Islam on German society. On October 26, about 4000 “hooligans” and far -ight activists joined a protest called “Hooligans against Salafists,” which was organised in Cologne by an Islamophobic group.

Growing suspicion towards Islam has also contributed to an increased hostility towards asylum seekers, the majority of whom come from Syria, Afghanistan and Iraq. In 2014, Germany saw more than 200 protests against asylum seekers and 86 attacks against reception centres for this population.

Manuel Tripp, an activist from the National Democratic Party contacted by FRANCE 24, explained that he joined the PEGIDA protest in Dresden because he wanted to “support a movement that is fighting against mass immigration to Europe and that wants to preserve European identity.” According to Tripp, the PEGIDA is “not against Islam itself, but against the Islamisation of the West.”

Germany is the top destination in Europe for asylum seekers. Since the beginning of the year, the country has accepted a record 25,646 asylum seekers out of a total 158,000 asylum claims. In 2013, 20,100 asylum seekers were accepted out of 127,000 total claims. On November 6, the parliament voted to increase the benefits given to refugees while their asylum claim is under consideration. Nevertheless, the German government is facing a growing shortage of housing for refugees. 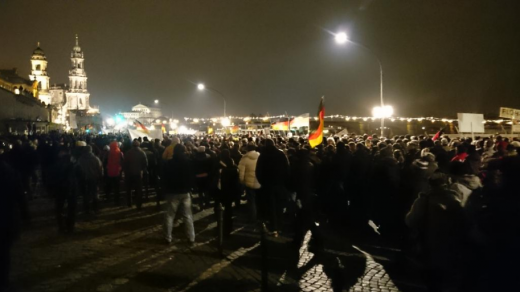