If you visit Saudi Arabia, remember to keep an eye on the ground where it’s not uncommon to find uncovered manholes in the streets. The Saudis call them “death holes,” because they have recently been the cause of several fatal accidents.

An open manhole covered with a chair. Photo posted on Twitter.

If you visit Saudi Arabia, remember to keep an eye on the ground where it’s not uncommon to find uncovered manholes in the streets. The Saudis call them “death holes,” because they have recently been the cause of several fatal accidents.

To help prevent more tragic accidents, activists have launched a campaign on social media calling for warning signs to be placed in front of the holes. The campaign, called ‘Working together to close death holes,’ also aims to pressure authorities to respond to this hazard.

A few days ago, Abdallah al-Zahrani, a teenager, died after falling into a poorly-covered manhole near his high school in the city of Djeddah. His father posted photos on his Twitter account showing the cover of the manhole, which was eaten away by rust. 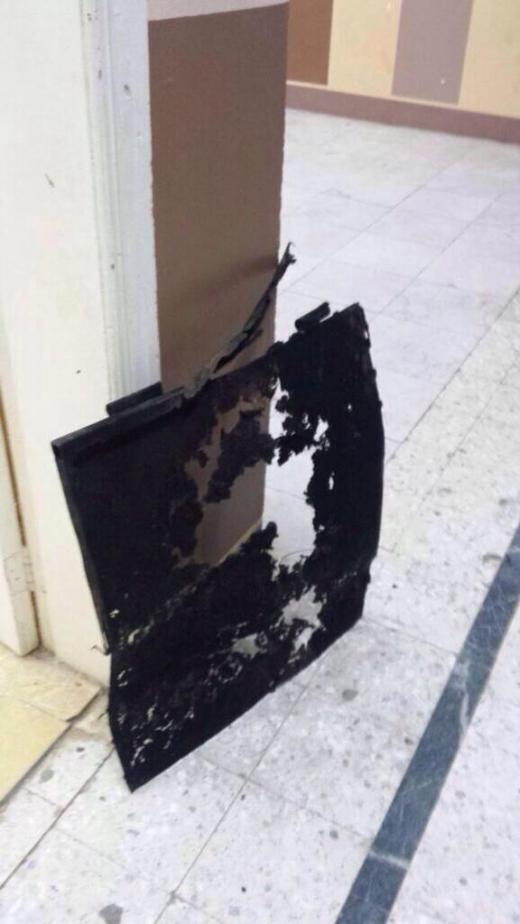 The photo of the rusted manhole cover that caused the death of high school student Abdallah al-Zahrani in Djeddah.

In October, a man and his 5-year-old son died in a similar incident in a public park. A witness recounted the horrifying story to a local newspaper: “When the child fell into the uncovered manhole, his father ran to save him. He climbed down and was able to grab the boy’s hand, but he lost hold of it because everything was so slippery. The father then hit his head and fell as well. He died a few minutes after a young man managed to rescue him." 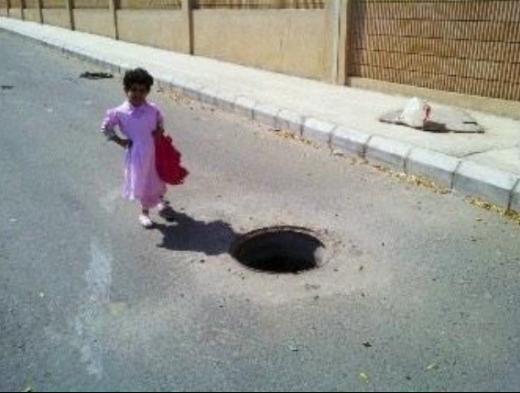 A little girl stands in front of an open manhole. Photo posted on Twitter.

This cartoon illustrates the danger of open manholes.

“There’s illegal trade in manhole covers all over the country”

There’s illegal trade in manhole covers all over the country. Poor people collect them and then sell them to businesses who in turn sell them to steel recycling factories.

You see this illegal trade happening with all different kinds of metal. Some people collect soda cans to sell them to aluminium recycling facilities and other people steal copper.

The difference is that stealing manhole covers causes danger to others — it could even cost someone his or her life. Yet the authorities are making no effort to stop this illegal trade or to punish those responsible.

A local resident posted these photos of a half-covered manhole near a mosque in the city of Haʾil, in the north of Saudi Arabia. Translation: “Just wait for news of another tragedy because of this negligence. […] This hole is covered with a wooden plank and is just waiting to swallow up a child.”