Neo-Nazis hold a parade celebrating the life of Rudolf Hess, Adolf Hitler’s right hand man every year in the German town of Wunsiedel. However, the 10,000 residents of this Bavarian town are not happy hosts. Angry and embarrassed by this annual gathering, the townspeople decided that this year they’d turn the tables on the extremists.

On November 15, residents of Wunsiedel distributed bananas to neo-Nazis parading in their village. They wanted to encourage them to finish their march, because they were unwittingly raising money to fight the neo-Nazi movement with every step they took. Screen grab from the video below.

Neo-Nazis hold a parade celebrating the life of Rudolf Hess, Adolf Hitler’s right hand man every year in the German town of Wunsiedel. However, the 10,000 residents of this Bavarian town are not happy hosts. Angry and embarrassed by this annual gathering, the townspeople decided that this year they’d turn the tables on the extremists. They launched a charity campaign whereby with every step the neo-Nazis marchers took they would unwittingly raise money for an NGO dedicated to fighting the extreme right.

Since 1987, the year that Rudolf Hess died, neo-Nazis have been travelling regularly to Wunsiedel, where the Nazi dignitary was buried. Their gatherings were banned for a decade but, in the early 2000s, the ban was lifted. In a bid to stop the extreme right from organising their annual Wunsiedel meetings, Rudolf Hess’ remains were exhumed and his tomb destroyed in 2011. However, this failed to keep the neo-Nazis away or the anti far-right-protestors.

This year, the residents decided to change their strategy. They launched a charity campaign: for each metre travelled by the neo-Nazis during their march on November 15, the town donated ten euros to EXIT-Deutschland, an NGO that encourages and helps people leave neo-Nazis groups.

The town also put up banners and set up food and drink stations alongside the parade route to encourage them to go as far as possible and thus earn the most money possible for the charity. In total, the initiative raised 10,000 euros in one day. 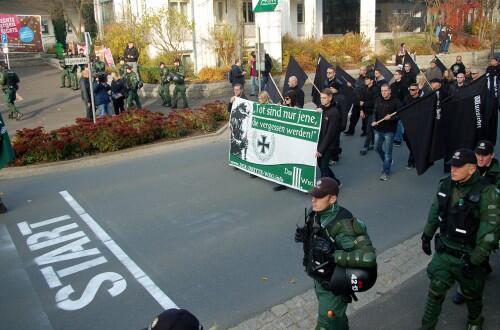 The start of the parade. Photo published on the website "Rechts gegen Rechts".

“We gave the neo-Nazis a certificate thanking them for helping to raise 10,000 euros”

Arno Speiser, 50, is one of the Wunsiedel residents who helped to launch this initiative.

In the past, we organised counter-demonstrations to protest the neo-Nazis’ descent on Wunsiedel. We sometimes had up to 1,000 participants. But even that wasn’t enough to make them understand that they aren’t welcome here.

This year, we launched the initiative ‘Rechts gegen Rechts’ (Editor’s Note: ‘Rights against rights’) to protest against the neo-Nazis in a different way. We did this after speaking with EXIT-Deutschland, a non-profit that does important work in fighting the extreme right.

We set up banners that played on slogans from the Third Reich all along their planned protest route. For example, on the posters by snack stations that we set up for the neo-Nazis, we wrote “Mein Mampf” (“My Snack”), an allusion to Adolf Hitler’s book “Mein Kampf” (“My Struggle.”) The Neo-Nazis were really upset. They tried to ignore us, but we could see that it annoyed them. 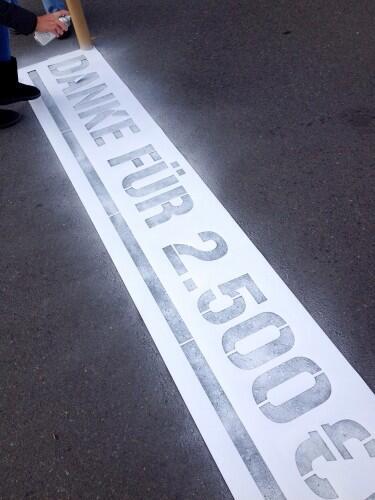 "Thank you for the 2,500 euros". All along the parade route, villagers had written signs indicated how much money had been raised for the nonprofit EXIT. Photo published on the "Rechts gegen Rechts" site.

At the end of their march, we gave them a certificate thanking them for having helped to raise 10,000 euros, which would be used to help neo-Nazis leave their extremist groups. 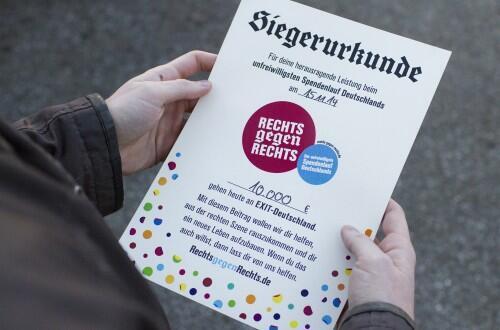 The certificate distributed to neo-Nazis to thank them for having helped raise 10,000 euros for the nonprofit EXIT. Photo published on the "Rechts gegen Rechts" website.

We only warned the municipality about our project at the very last minute because we knew that they might have forbidden it – for fear of tensions and disorder. But there were a lot of police officers present, so it was very unlikely that any of the neo-Nazis would attack us. Besides, we were ready to take risks for this cause. I truly hope our initiative dissuades them from returning.

“Those who understood were really irritated”

Felix Bachnik lives in Erlangen, a town located about a hundred kilometres from Wunsiedel. He went to the town on the day of the march with Stadtjugendring, an organisation dedicated to fighting against the neo-Nazi cause.

The atmosphere was really strange. There were about 300 police officers, just over 200 neo-Nazis and about 300 people who came to counter-protest this gathering. The neo-Nazis started their march at about 2 pm. We tried to ruin their parade by breaking into loud chants like "Eure Kinder werden so wie wir" (“Your children will join us.”). 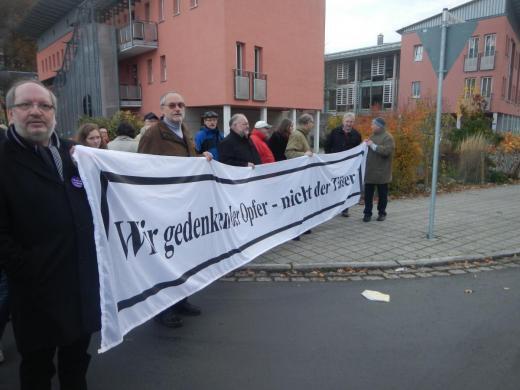 Wunsiedel residents carried a banner that read "We remember the victims". Photo by Félix Bachnik.

I don’t think that all of them actually understood what was going on, given the fact that the “Rechts gegen Rechts” initiative was something completely new. Those who did understand were clearly very irritated. But they continued to march, participating indirectly in the raising of funds for EXIT. 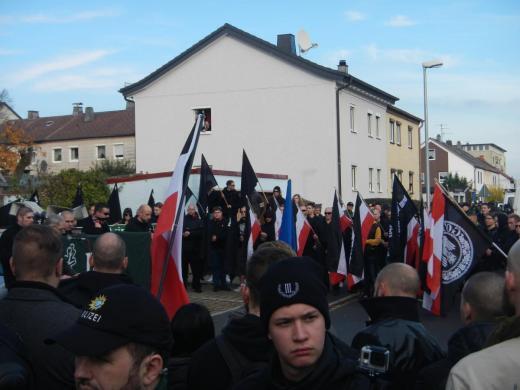 Neo-Nazis giving a speech at the end of their parade in Wunsiedel. Photo by Félix Bachnik.

At one point, some of them started given nationalist speeches. They said they were “misunderstood” by the media and that there is “false information being circulated about former German army soldiers.”

I have already participated in about a dozen counter-protests to neo-Nazi gatherings and I am not going to stop anytime soon. I think it is time for them to stop trying to get attention… and time for them to start reading some history books.