Deadly mob justice for a suspected rebel in North Kivu

An angry crowd of people in North Kivu province in the Democratic Republic of Congo stoned a man suspected of belonging to an armed rebel group, before burning him alive. This act of extreme violence took place on October 31 in the city of Beni, which has been the target of numerous bloody rebel incursions in recent months.

Photo of the crowd taken by our Observer Elisée Mweru in Beni on October 31.

An angry crowd of people in North Kivu province in the Democratic Republic of Congo stoned a man suspected of belonging to an armed rebel group, before burning him alive. This act of extreme violence took place on October 31 in the city of Beni, which has been the target of numerous bloody rebel incursions in recent months.

This scene of mob justice took place at roughly 10am in the Matonge neighbourhood in Ruwenzori, a district of Beni. The victim had tried to flee the town after being stopped and interrogated by several taxi drivers, who suspected he may have been one of the rebels responsible for attacks that have killed many local people. He was then recaptured and killed by a crowd of people. 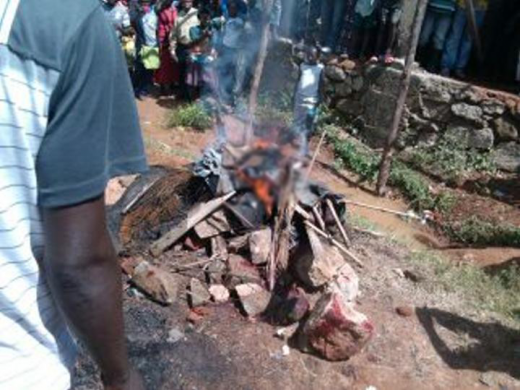 The man who was lynched by the crowd on October 31 in Beni was burned right in the street. Photo by our Observer Elisée Mweru.

"More than 200 people were throwing stones at him"

Elisée Mweru, who is a communications student, witnessed the events. He was upset by the brutal violence and called it both unnecessary and undeserved.

Four men went to the Oicha parking lot, apparently looking for a taxi. Members of the local taxi association thought the men looked suspicious and so they asked them for their IDs. The four strangers were badly dressed, they were dirty and their hair was messy. They were also speaking an unfamiliar language but, to the taxi drivers, it sounded like a language spoken in Rwanda. It’s the language that really set off warning bells for them. [Editor’s Note: Many of the rebel groups that have been terrorising North Kivu are based across the border in Rwanda and much of the violence is linked to the bloody Hutu-Tutsi rivalry at the heart of the Rwandan genocide. When the taxi drivers brought the four strange men to their office for questioning, they discovered that they had bloody machetes in their bags.

One of them started running, but, as he fled, he ran into a policeman, who asked him where he was going. The man explained that people were accusing him of being a member of the rebel group ADF-Nalu [Editor’s note: ADF-Nalu is an Islamist Ugandan rebel group that has rear bases in DR Congo.The policeman tried to protect him from the locals who had started trying to chase him down.

But the people were gathering quickly. There were at least 200 of them. Everyone started throwing stones at the man. He fell on the ground and they started hitting him. Someone said, “Stop, we are going to burn him instead!” Then, about a dozen people came towards him. One of them said, “He’s still breathing, let’s burn him while he is still alive so that he can feel the pain.” People went and found wood. A local shopkeeper brought over a half-litre of fuel to burn him with. The man was in agony.

Next, two people took bites of his flesh. I left at that point because it was all so inhuman. It was the first time that I’ve seen someone burned in this way. We don’t even know if he was really part of an armed group.

It’s the police who should stop suspicious people; it’s not the people’s job to carry out justice!

The three other men who were with him stayed in the taxi drivers’ office. Because people started throwing stones against the walls of the building, soldiers came to protect the three men. They took them away and I think they are still in the hands of the army.

On Friday, October 31, President Joseph Kabila was in Beni to give an important speech about insecurity in the region. Notably, he asked the population to refrain from taking justice into their own hands, while also announcing new security measures for the region plagued by violence.

The night before, on October 30, ten people were killed in an attack that took place about 70 km from Beni. In the past month, more than 100 people have been slaughtered by attacks from rebel groups in the region.

Anselme Wasingya, a film director and cameraman, was about 20 kilometres from Beni when the lynching took place. Several days earlier, he had himself been accused of belonging to the rebel group ADF-Nalu – superficially, because of his beard, but mainly because of the mounting hysteria linked to the growing insecurity in the region.

Anyone who looks suspicious is stopped. On Wednesday, October 29, my colleagues and I were stopped by soldiers because of our beards. They asked us for ID and started rummaging through my bag, which contained my camera, as well as my colleague’s briefcase, which contained a computer.

The soldiers accused us of being rebels or spies from the rebel group ADF-Nalu, but their only “proof” was our beards. Finally, they let us go. Currently, Beni is full of soldiers, but the massacres continue all the same. [Editor’s Note : at least eight people were killed in Beni last Saturday night].

In regards to the lynching that happened on Friday, you need to know that people who don’t speak Swahili well are not looked upon kindly by locals in North Kivu. The men who were stopped by the taxi drivers spoke a dialect of Swahili close to Kinyarwanda [Editor’s note: Kinyarwanda and Lingala are the main languages spoken by the rebels in ADF-Nalu] which roused the suspicions of the locals.

In January, the DR Congo’s army launched a massive operation to push back the rebels and secure the region. Some locals, judging the military campaign insufficient, have taken their security into their own hands, forming self-defence groups.