A video has emerged of men in military dress torturing two civilians, one of whom is bloodied, in a village in Egypt’s Sinai desert. These images, which have circulated on social networks, are terrifying. And all signs point to the Egyptian army’s culpability. However in Egypt, neither the authorities nor the media seem preoccupied by the incident.

One of the victims being whipped by a man in uniform.

A video has emerged of men in military dress torturing two civilians, one of whom is bloodied, in a village in Egypt’s Sinai desert. These images, which have circulated on social networks, are terrifying. And all signs point to the Egyptian army’s culpability. However in Egypt, neither the authorities nor the media seem preoccupied by the incident.

WARNING: THESE IMAGES MAY SHOCK VIEWERS

In the video, a man with a bloody leg is crawling on all fours while a man in military uniform kicks him repeatedly. The attacker then forces his victim – whose head is covered by his jellabiya (a traditional Egyptian tunic) – to walk on one leg, then throws him on the ground and beats him up, while ordering him to hide his face. Other young men wearing regular clothing help with the beating. After a minute, another man, whose head is also covered by a jellabiya, is taken to face a wall and is severely whipped. The attackers then continue to beat both men and insult them, as the victims moan. Finally, they are locked in a room. Due to its violent nature, FRANCE 24 has decided to only publish screen grabs from the video.

The army stays quiet while the media comes to its defence

Most of Egypt’s state-run and private media outlets, which back president Abdelfattah Al Sissi and the army he comes from, have stayed mum on this incident. Citing anonymous military sources, newspapers that did talk about it rejected all accusations of torture. For them, this is a fake video that is meant to tarnish the army’s image just as it embarks on a large-scale operation in the Sinai desert to create a buffer zone with the Gaza Strip.

Still according to the anonymous military sources cited by these newspapers, the men in military uniform were civilians disguised as soldiers, not real soldiers. As proof, they say that some of the men in uniform in the video are wearing flip-flops, which they claim isn’t done in the army.

An activist network called Sinna24 obtained the video from a soldier. He then posted it on Sinna24's Facebook page, which is dedicated to news in the Sinai Peninsula. After having investigated the circumstances of the video, the activists believe that the two victims were indeed tortured by Egyptian soldiers, who later executed them.

The man with the bloody leg being beaten.

“We were able to identify the victims”

Mustapha A. (not his real name) is an activist with the activist network Sinna24.

This video was filmed on October 10 in Egyptian army barracks located in a village called Al-Joura, in the region of Sheikh Zouid, in North Sinai. There is nothing strange about some of the soldiers wearing civilian clothing or flip-flops, since they’re inside their garrison.

We managed to identify the two victims. Ahmed Abu Fafrij, age 18 [the first victim in the video, with a bloodied leg] was from the village of El-Mehdiya, which is not far from where the video was filmed. [Editor’s Note: This village is the hometown of Chadi Al-Manii, one of the leaders of the jihadist organization Ansar Bait Al-Maqdis, which the army has been tracking for months in the Sinai desert. It is also a hotspot for immigrant trafficking by Sinai Bedouins.] The other victim was Yousef Atiq, a muezzin in a mosque in the same village.

During our investigation, we realised that the spokesperson for the Egyptian army, Mohamed Ghanim, had published photos of these two men on his Facebook page on October 10. The images were accompanied by text indicating that the army had killed terrorists during a firefight in North Sinai.

It indeed appears the victims in the video are the same men as those in the army’s photos. On the screen capture from the video (second image below), the man identified as Ahmed is wearing a beige jellabiya, white pants stained in blood, and blue underwear. On the photo published by the army, you can see the same blood spots on the same parts of the jellabiya and the underwear. 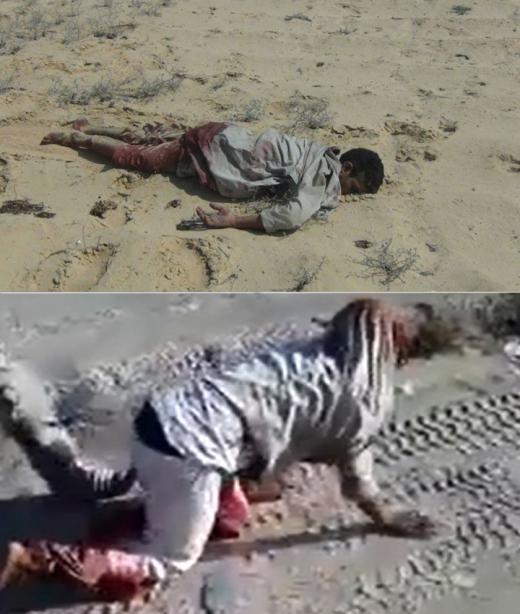 Top: the photo published by the army. Bottom: a screen capture from the video.

The second victim, identified as Yousef, is wearing a light blue  jellabiya and khaki pants in the video. He also appears to have a beard. All this fits perfectly with the army’s photo. 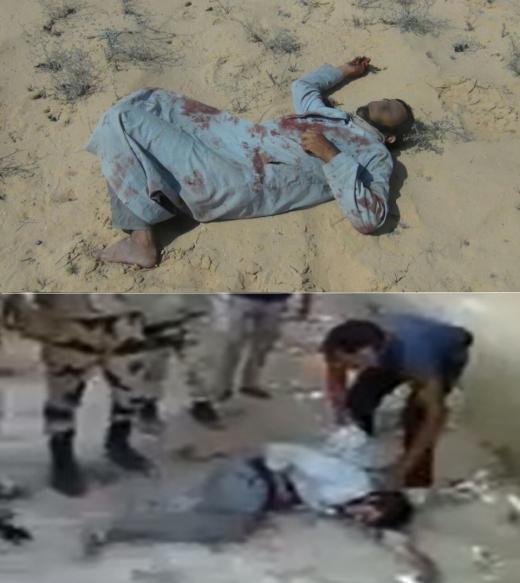 Top: A photo published by the army. Bottom: a screen capture from the video.

For us, there is no room for doubt. Soldiers tortured and then executed the two men. Besides the photos, we’ve also interviewed people close to the victims, who told us the soldiers came into the village of El-Mehdiya on October 10 aboard four Hummers. They took the two men away. The army’s spokesperson published their photos the very same day!

This is not the first time cases of torture and executions have been reported in the village of Al-Joura, where numerous soldiers are based. Last February, residents found dead bodies of Sinai locals, but no investigation was ever opened.

'A rise in torture cases since Sisi became president'

In Egypt, reports of people being tortured or disappearing after being taken into custody by the police or the army are legion. Amnesty International noted a sharp increase in arbitrary arrests as well as cases of torture and death while in custody since former president Mohamed Morsi was ousted from power in 2013. The organization reported that 80 people died in custody between July 2013 and mid-May 2014.

FRANCE 24 contacted Mohamed Ghanim, the Egyptian army’s spokesperson, for comment on the video. He has not yet replied to our request.