Five minutes: the length of a protest in Angola

Angolan law stipulates that anyone who organises a protest must inform the authorities, who are supposed to “provide protection” for the demonstrators. But when activists do this, authorities use this information to arrest them as soon as they arrive at the designated location. To circumnavigate the situation, a group of young people have been organising “flash mob” protests to gain a least a few minutes of activism before being shut down.

Anti-government protestors who gathered on Oct. 3, 2014 in Luanda were shut down by police after five minutes, probably because someone passed information about their planned meeting to the police. (Photo posted to Facebook by Central Angola 7311)

Angolan law stipulates that anyone who organises a protest must inform the authorities, who are supposed to “provide protection” for the demonstrators. But when activists do this, authorities use the information to arrest them as soon as they arrive at the designated spot. To circumnavigate the situation, a group of young people have been organising “flash mob” protests to gain a least a few minutes of activism before being shut down.

The small group of activists — non-partisan and committed to fighting for freedom of expression in Angola —  text each other a time and place. On the specified day, they gather — often in front of one of the ministries in Luanda, the capital - and then citizen journalists arrive, armed with cameras. They have to move fast, as they will only have a few minutes before police or soldiers arrive.

This scene has been repeated seven or eight times over the past three months. The longest protest, held in September in front of the education ministry, lasted 25 minutes. The most recent, held on October 3, only lasted 5 minutes.

This video, which includes a timer, shows how the protestors were arrested within 15 minutes of launching their protest on August 4, 2014. It was filmed and edited by members of Angolan collective Central Angola 7311.

Police often use tear gas, water cannons and dogs on those participating in the anti-government protests, which began in 2011, inspired by the Arab Spring. Non-violent protestors are routinely beat up by police and plain clothes thugs and at least three have been killed under suspicious circumstances. Most protestors have been arrested multiple times and are sometimes held for days on end.

But for the activists, each brief protest and each photo posted to Facebook works to “erode the machine” of the Angolan state, which has been run by for the past 35 years by President José Eduardo dos Santos and his party, the MPLA [Editor’s note: Movimento Popular de Libertação de Angola]. 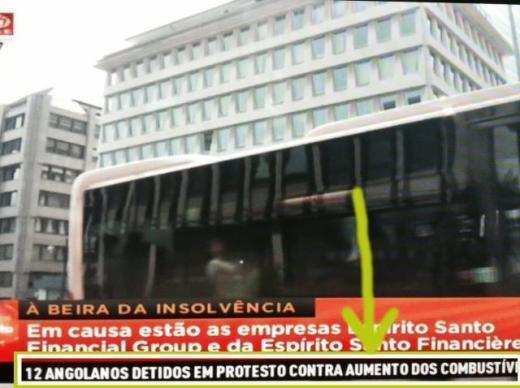 While the Angolan media rarely covers the arrests of protestors, this screengrab from Portuguese television SIC NOTICIAS shows the news headline that the Angolan police arrested 12 protestors at the protest held on October 3, 2014. (photo from Central Angola 7311)

‘You can’t do anything without police being there in a few minutes.’

Luaty Beirão is a rapper as well as an activist, human rights monitor and member of collective Central Angola 7311, a group that shares information uncensored by the regime through its network of citizen journalists. The numbers refer to March 7, 2011, the date of the first organised, non-partisan protest held in Angola for 35 years. In 1977, the state massacred a large group of dissidents. Beirão has participated in three of the recent "flash mob protests."

We arrange the spontaneous protests amongst ourselves — but it’s hard knowing who to trust even in a small group of people. We might text 20 people, but the 21st is a police informant. Here, you never know. In Luanda, we live in a quasi-police state. If the President goes out, heavily armed police are everywhere. There are always at least two police cars parked on Independence Square. You can’t do anything without police being there in a few minutes.

In the five or ten minutes before the police come, our reporters are fast enough to flood the internet with pictures ,but there are still not many people who face up to the police apparatus. Most witnesses stay in the periphery to see what happens to the first group, usually made up of the same ten or fifteen people — you can count those brave souls on your fingers and toes. 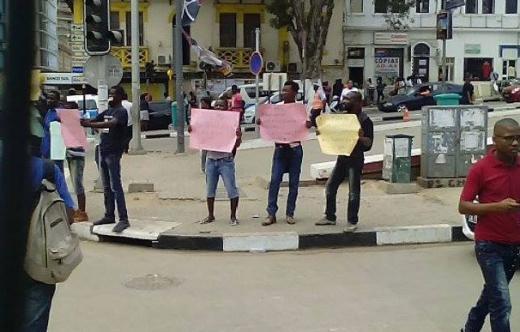 The protests are often very small and only a handfull of people attend, like this protest on October 3. (Photo from Central Angola 7311.)

‘Sometimes we laugh at ourselves and what we call progress’

Recently, however, the crowd has started shouting when the police try to take us away. This shows tiny steps toward real change. Sometimes we laugh at ourselves and what we call progress: three years after we began to protest, we are still only about 10 people doing flash mobs and maybe 100 people see what we are doing and stand around going “Yay, yay!”

But there are more and more spontaneous protests and people are encouraged by the results. Two months ago, a Luanda neighbourhood broke into protest after a power cut. And guess what? The energy company turned power back on.

At 2:50, local people began to chant "Não violência!" or "No violence" as police arrested protestors. At 5:57, a woman is pushed to the ground by police. This protest was held on September 5, 2014. (Video from the Facebook page of Central Angola 7311.)

‘The government has killed protestors in the past but I don’t think they’ll do it again.’

The police are also becoming more wary of us. When I was arrested in March, the commander of a local station refused to take us because we had filed complaints about our treatment the last time. I also don’t think the government will kill protestors again. They didn’t expect consequences when they killed Cassule and Kamulingue because they were just two young ghetto kids [Editor’s note: The two activists were tortured and murdered after trying to organise a protest in May 2012]. But we took their names, photos and stories to human rights groups. Now, what the government fears most are international arrest warrants.

One boy, Elias Batama, went missing after a larger protest on October 11, 2014. When we threatened to take to the streets, the police conceded and told us he was in a certain prison. The charges against him were false, but we raised the money for his bail. 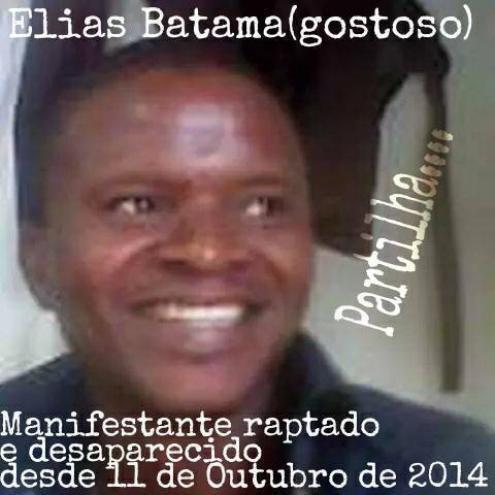 This flyer was shared online after a protestor named Elias Batama disappeared on October 11, 2014 after police arrested him. He was located days later and eventually freed from prison.

Of course, we are still scared, but we don’t allow fear to drive our decisions. The government sent a threat letter to my grandmother last Christmas. It was wrapped in a pretty teddy bear bag and said it was from a local women’s group: “We, the mothers of Sambizanga, will burn your house down if your grandson continues to protest” and seemed to say that they were worried that I would "mislead" their children. But it was obviously from the government. I published the letter instead of letting it frighten me.

It’s ridiculous. You can laugh. We prefer to laugh in order not to cry. This is not a serious county. No institution can be taken seriously. But our struggle for freedom of expression is serious.

‘If every Angolan comes out to demonstrate, the government won’t kill everyone.’

Angolans do believe in the right to protest, but they don’t participate because they are afraid. They remember May 27, 1977 [Editor’s note: A breakaway faction of the ruling MPLA party, led by Nito Alves, led an uprising. Most were brutally killed.] Angolan citizens need to wake up. If every Angolan comes out to demonstrate, the government won’t kill everyone.

We are trying to build court cases to take to the African Commission and the UN. We have also been lobbying different embassies. Some people are using social media to spread the word on human rights violations. It’s helping Angolans to get connected, to understand the situation in the country. It’s a process, but we’re making the government uncomfortable. 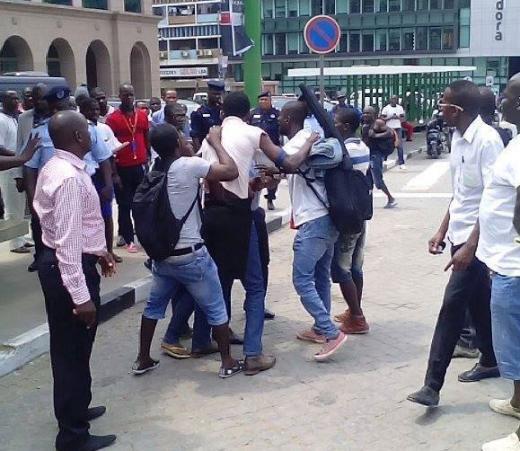 This scuffle occurred during the protest on October 3, 2014.