Growing concern over fate of Tunisian journalists kidnapped in Libya

It’s been 50 days since Sofiene Chourabi, a Tunisian journalist and a FRANCE 24 Observer, was kidnapped along with a colleague while reporting in Libya. His friends and family fear the upcoming Tunisian elections and the chaos reigning in Libya will delay efforts to secure his release. Read more...

The last photo taken of Nadhir Ktari (left) and Sofiene Chourabi (right) in Libya on September 3.

It’s been 50 days since Sofiene Chourabi, a Tunisian journalist and a FRANCE 24 Observer, was kidnapped along with a colleague while reporting in Libya. His friends and family fear the upcoming Tunisian elections and the chaos reigning in Libya may delay efforts to secure his release.

Chourabi and photographer Nadhir Ktari had travelled to Ajdabiya, in eastern Libya, to report on how the Libyan crisis was affecting neighbouring Tunisia for the private channel First TV. The area is a hotbed of fighting between soldiers loyal to General Khalifa Haftar and jihadist combatants.

In early September, the two journalists were briefly held by a militia closely associated with General Haftar in the town of Brega. They were released, but told that they had 12 hours to leave the region. But they were apparently not able to get out in time. The two were captured a second time by unknown kidnappers, and there has been no news of them since. 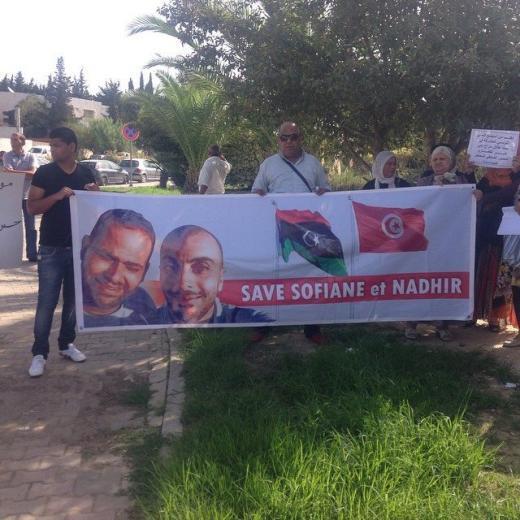 The two journalits disappeared more than a month and a half ago. Photo published by their support committee.

Since early October, the families of the two journalists — as well as journalist support groups — have been protesting in front of the Libyan embassy and the Ministry of Foreign Affairs in Tunis to demand that officials work for the liberation of the two journalists. Alaa Talbi is a human rights activist who took part in the protests.

The only news that we have had of Sofiene and Nadhir since September 18 was one sentence in a statement by the Tunisian minister of foreign affairs, saying “They are well” That’s it. We still have no idea who kidnapped them and why they were not repatriated after the ultimatum given by the Brega militias.

Sofiene knew that the zone was dangerous. He was investigating the consequences of the Libyan crisis on Tunisia, focusing on how the fighting between rival militias is forcing millions of Libyans to flee and seek refuge in Tunisia. He and Nadhir were also trying to find out more about the arms trafficking which has become widespread in the region.

The main problem is on the Libyan side — there is no functioning government, and so we have no reliable contacts. Those wearing official uniforms mix with those wearing militia uniforms [Editor’s note: what's left of Libya's regular army and the militias have been fighting for control of the border checkpoints.]

The other thing that worries us even more is that the Tunisian legislative elections are coming up [Editor’s note: on the weekend of October 25] and then the presidential election in November. We feel like this has put the fates of Sofiene and Nadhir on the back burner because everyone is concentrating on the campaigns… but it is just impossible for us to imagine that we might have to wait for two more months before anything happens.

We know that it is possible for negotiations to go quickly. Last June, a Tunisian diplomat who was kidnapped in Tripoli was freed after only three months of captivity [Editor’s note: his kidnappers claimed responsibility for the abduction in a video posted on YouTube].

Even if there’s been no video or other traces of our friends, we hope that the authorities will speed up this case. My fear is that the Libyan militias will start kidnapping other Tunisians and that our government will remain indifferent. 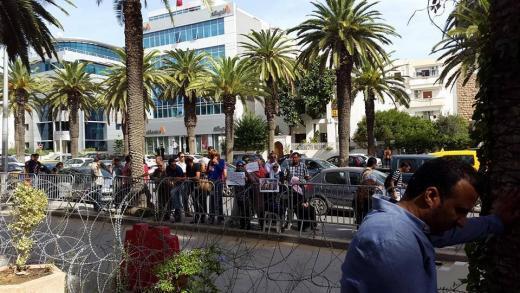 An Observer at the heart of the Tunisian revolution

During the Tunisian revolution, Chourabi collaborated on numerous occasions with FRANCE 24 Observers. Formerly a journalist for an opposition newspaper during the rule of Zine el-Abidine Ben Ali rule, who was toppled in 2011, he later became one of Tunisia’s most influential bloggers thanks to his coverage of protests in Tunis. His work earned him a prestigious Algerian prize honouring freedom of the press in 2011.

Below, you can find links to articles published on the Observers website which included Sofiene’s eyewitness accounts: