Astronomers had planned to celebrate the groundbreaking on the biggest telescope in the world in Hawaii last week. But activists opposed to its construction had other ideas. Read more...

Protesters in front of Mauna Kea, a Hawaiian volcano where a giant telescope is going to be built. Photo published on Facebook by Kerri Petersen Marks.

Astronomers had planned to celebrate the groundbreaking on the biggest telescope in the world in Hawaii last week. But activists opposed to its construction had other ideas.

Last Tuesday, a large meeting was held at the foot of Mauna Kea, one of Hawaii’s largest volcanoes. The 300 people assembled included native Hawaiians as well as environmentalists, activists and scientists from all over the world. After holding a traditional prayer ceremony, part of the group climbed the dormant volcano to block access to the summit, where the ceremony was being held to inaugurate the “Thirty Meter” Telescope project, also known as the TMT. The TMT ceremony’s invitees included astronomers and politicians from all over the world.

The activists succeeded in blocking the roads to the summit for several hours during which they performed traditional Hawaiian songs and dances. The authorities finally intervened; no one was arrested, but the ceremony was shortened, and the direct broadcast that had been planned was cancelled, provoking the ire of science fans worldwide who had hoped to tune in.

The protestors say the construction will violate a sacred place: in traditional Hawaiian beliefs, the Mauna Kea symbolises the link between the earth and the sky. Hawaiian mythology holds that the sky god and earth mother are the parents of the Hawaiian Islands and that Mauna Kea was their firstborn child. Mauna Kea’s summit is called the land of the gods, and is considered the source of all life. 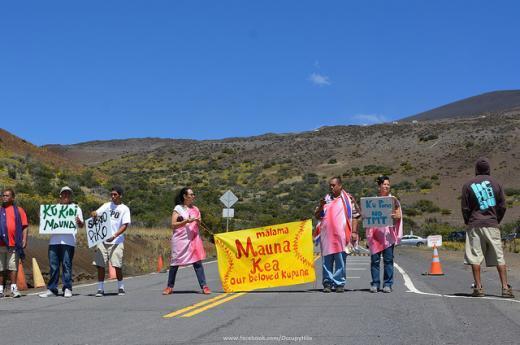 Protesters blocked the road to those who were trying to get to the telescope's groundbreaking ceremony.  Photo by Occupy Hilo.

"This construction harms the environment and goes against our traditions"

Hawane Rios is a singer and activist from Hawaii. She has been part of the movement to save Mauna Kea since 2010 and was at the protest last Tuesday.

My ancestors travelled across the Hawaiian Islands by following the stars. So while astronomy is an important part of our culture, it is completely absurd to us that the TMT project will have negative impacts on the environment. To see this construction on the summit is just heartbreaking. I have participated in numerous traditional ceremonies and rites held on Mauna Kea; it’s a place close to my heart.

Our biggest fear is that the construction of this new telescope will cause irreversible damage to a rare ecosystem, which had been spared by man until this point. The main casualty of this construction will be will the tiny wekiu bug [Editor’s note: Wekiu means “summit” in Hawaiian. The flightless insect’s Latin name is Nysius wekiuicola; it is a rare species that lives amongst the volcanic rocks.

These bugs are scientifically very interesting: lab studies of the wekiu bug revealed an amazing blood chemistry that keeps it from freezing until -4 degrees Fahrenheit [Editor’s note: -20° Celsius]. But the fate of this insect is just one example of the more widespread damage that could be caused by the telescope’s construction.

We are also terrified that the construction will alter the flow of thawed snow each spring, which feeds into the lakes and pools at the base of the volcano. Disturbing these precious ecosystems goes against all our beliefs.

Native Hawaiian’s culture is a peace-loving one, and organizing opposition to a project, no matter what it is, is very taxing for us. Tuesday’s protest was the first large-scale action that I have ever participated in. I was proud that such a diverse group came together: I saw young people, older people, Hawaiians and non-Hawaiians uniting to defend something we all love. 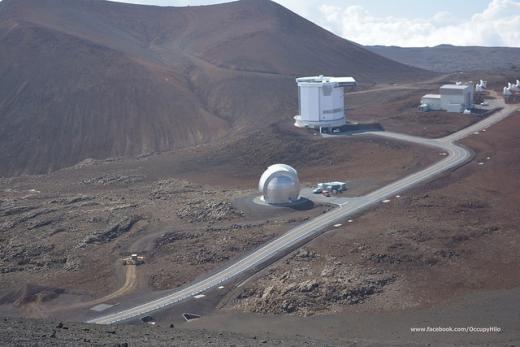 There are already two observatories set up on the volcano. The giant telescope would be built on the north flank of the volcano, which has so far been spared.

The protesters were not just Hawaiian natives. Kerri Petersen Marks is an American citizen journalist who has lived in Hilo, the town closest to Mauna Kea, for 14 years.

There have been protests and prayers in the past, but what happened on that day was really a unique moment in the history of this protest movement.

I was part of the group that went up the volcano to block the arrival of participants in the TMT ceremony. It was actually a real challenge and good exercise! Our bodies had to get used to the altitude. Once we arrived at the top, we realised that the organisers of the TMT inauguration had planned a ‘traditional Hawaiian ceremony’ to help ease their consciences. But when the leaders of our protest arrived, dressed in traditional Hawaiian garments, the clash between these two worlds was flagrantly apparent.

Thirty seconds into the video, Johsua Lanakila, one of the protest movement's leaders, interrupts the groundbreaking ceremony. After having voiced his anger, he and other Hawaiian natives perform a prayer before folding up the guests' chairs. Video by David Corrigan  for Big Island VIdeo News.

These protests really demonstrate the gulf between the native Hawaiian people and their government. Some Hawaiians truly believe that their land is illegally occupied by Americans [Editor’s note: Hawaii was annexed in 1898 by the United States and became the 50th state in the union in 1959. Some separatist activists still contest the legality of the original annexation]. For them, this project symbolises the ‘occupation’ and completely disrespects the sacred beliefs of the community. 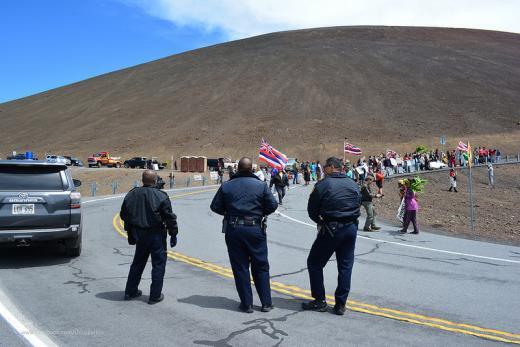 The police had received the order not to arrest any of the protesters. Photo by Kerri Petersen Marks for Occupy Hilo.

The construction phase has begun and won’t stop, says the TMT team

The decision to construct the giant telescope was made almost 25 years ago, in 1990. The TMT will be as big as a football field and its mirrors, measuring 30 meters in diameter each, will allow scientists to see the universe at a range 10 times larger than any existing telescope. Several American and Canadian research centres will foot the massive bill for the project, which will cost roughly $1.4 billion [1.1 billion euros). The telescope was supposed to be completed by 2018, but the initial construction was delayed, in part because of snow on the volcano; workers will have to wait until next spring to begin. Now, project planners say it will be operational by 2022.

When contacted by FRANCE 24, Sandra Dawson, a manager of the TMT project, said:

We regret that the inaugural ceremony, held in respect with traditional Hawaiian beliefs, was cut short. Representatives of the Hawaiian native community have validated multiple documents, including one which demonstrates the very minimal impact that the TMT’s construction will have on the environment. For us, the construction phase has begun, no matter what happens.

While representatives of the protesters and the native Hawaiian people have been included in discussions, they say that their wishes have not been taken into account. 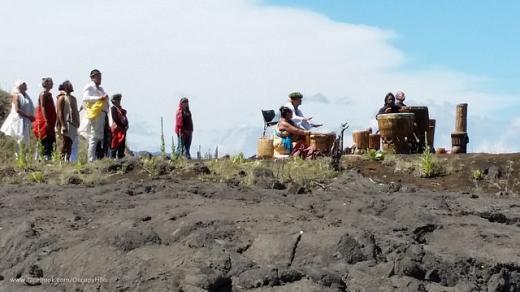