The ‘flying coffin’: a lynching tool in Ivory Coast

A coffin carried by local residents became a macabre tool used to lynch two people in Cosrou, a village in the southern Ivory Coast, during a so-called “flying coffin” ceremony. Believers say that this rite allows the deceased to identify those responsible for his death. But in reality, these ceremonies are often ways to settle scores between local residents. Read more...

A "flying coffin" rite in Cosrou, Ivory Coast, on September 20. Screen capture from a video filmed by Julien Appia and published on the site Avenue225.com.

A coffin carried by local residents became a macabre tool used to lynch two people in Cosrou, a village in the southern Ivory Coast, during a so-called “flying coffin” ceremony. Believers say that this rite allows the deceased to identify those responsible for his death. But in reality, these ceremonies are often ways to settle scores between local residents.

“The victims were suspected of witchcraft”

Our Observer, Julien Appia Kouassi, was in the village of Cosrou at the same time that a funeral was held for Esmè, a man from Abidjan who had died suddenly in mid-September. The man, who had complained of fatigue for several weeks before his death, had gone for tests at a clinic in Abidjan. His family said the results showed nothing abnormal.

On September 20, after a Mass organised in honour of the deceased, the coffin bearers were supposed to carry the casket to the cemetery. Instead, to the shock of our Observer and other onlookers, they suddenly took off in pursuit of those “responsible” for the death.

It’s the first time that I’ve ever seen such a scene. I knew about the “flying coffin” rite but I had never witnessed it. The coffin bearers were sweating profusely and seemed to have trouble breathing. Some were even screaming "Stop ! Stop !" but none of them seemed able to set down the coffin or to stop moving.

Fifty-second seconds into this video filmed by Julien Appia Kouassi, the coffin bearers turn the coffin 360° several times before stopping in front of the home belonging to the brother of the deceased. He was lynched by the crowd several minutes later.

The bearers first went towards the home of the deceased, where they smashed in the doors and windows. According to the tradition, this is the sign that the owner of the house – in this case, the brother of the deceased – was responsible for his death. So they hunted him down, forced him to lie under the coffin and then they crushed him with a few blows from the heavy wooden casket.

Then they headed towards a small hill in the middle of the village where a woman in her sixties met the same fate. It was horrible; the woman was in agony and she was crying for help in the local language. Some people wanted to help her but the coffin bearers said that anyone who intervened would meet the same fate. 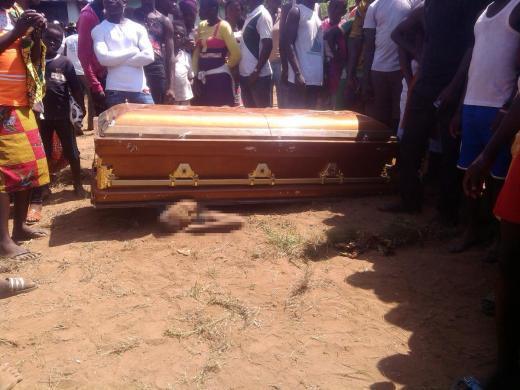 A woman in her sixties, who was accused of witchcraft, lies lifeless under the coffin. Photo by Julien Appia.

The bearers maintained that they had been touched by “a supernatural force coming from the coffin.” But the people who were killed were already suspected of witchcraft. So did the villagers use this burial as an excuse to kill them? In any case, they celebrated around the old woman’s lifeless body. People were dancing, taking photos and laughing at what they called “the end to a witch’s reign.”

"The coffin bearers are often drugged"

This bloody tradition is called “londola” in the Democratic Republic of Congo. It also occurs in Burkina Faso, Niger and Ghana. In Ivory Coast, it is primarily the Akan ethnic group, concentrated in the south of the country, that continues to practice these rites, said Dr. Yao Saturnin Davy Akaffou, an anthropologist, researcher and lecturer at the University Félix Houpouët Boigny in Abidjan.

Ivorian Akans believe that death is never natural or fortuitous, so they try to seek out culture and spiritual explanations for it. In most cases, the coffin’s victims are people who have already been accused of witchcraft or even family members of the deceased. In these cases, it’s very easy to suspect that there is, in actuality, score-settling behind this kind of rite.

It’s important to mention that the coffin bearers often take traditional medicines that have the same effects as very strong drugs. According to traditional beliefs, this is necessary in order to protect the bearers themselves from the deceased’s rage. Their drugged state could explain these dramatic outpourings of emotion.

I have observed that, lately, these traditions are on the decline, because those responsible for these acts are frequently condemned for murder. Often, village chiefs no longer allow coffin bearers. 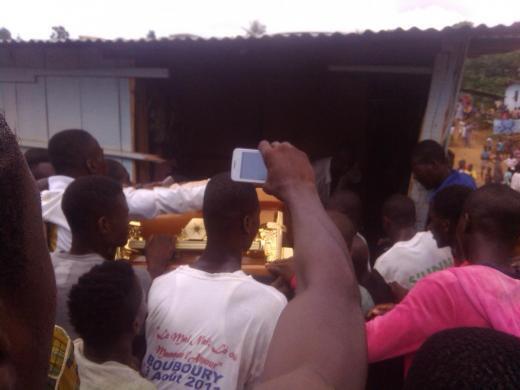 According to our Observer, the scene triggered a mass hysteria and the local population seemed to be “satisfied” after having lynched the suspected witches.

According to our Observer, the local police have launched an investigation to determine the exact causes of death of the two people killed during the funeral. Yet he says that the coffin bearers and the local residents responsible for the lynching have yet to be called in for questioning.

When contacted by FRANCE 24, the city council of Dabou, the town closest to the village of Cosrou, did not wish to comment on the events, explaining that Cosrou is located in an area managed by Toupah subprefecture. Our journalists were unable to contact a spokesperson in Toupah.