A childbirth odyssey in austerity-hit Greece

The island of Santorini, located in the Cyclades archipelago in southern Greece, is often said to be one of the world's most beautiful. But although it may be paradise on earth for tourists, it is less so for local residents. Our Observer there explains that she will be forced to give birth on the faraway mainland because Greece’s drastic austerity policies have severely diminished the medical services available on the island.

The island of Santorini, located in the Cyclades archipelago in southern Greece, is often said to be one of the world's most beautiful. But although it may be paradise on earth for tourists, it is less so for local residents. Our Observer there explains that she will be forced to give birth on the faraway mainland because Greece’s drastic austerity policies have severely diminished the medical services available on the island.

Georgia N. is a Greek resident of Santorini. When she was pregnant with her first child in 2011, she discovered that she suffered from gestational diabetes, a type of diabetes that appears during pregnancy.

The construction of a 50-bed hospital began in 2008. It was supposed to be operational for the birth of my first child and to have all the required equipment: several maternity and delivery rooms, examination rooms… everything that someone like me, who was diagnosed with pregnancy-related diabetes, would need. I waited until the last moment, but when I saw that the hospital was still not open, I decided to travel to Athens to give birth. I spent a month under observation in order to take all the tests, but if I had been able to give birth in Santorini, I would only have had to stay for a week at most. At the time, I figured that at least my next child would be born on Santorini. 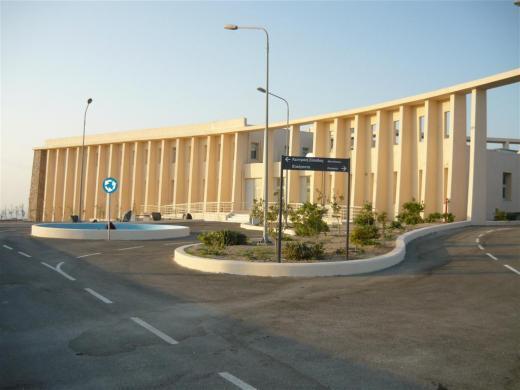 Photo of the Santorini hospital, taken in 2011 after the end of construction.

Now, four years later, I am pregnant with my second child, with an expected due date of January 2015 — and history is repeating itself. The hospital has still not opened due to cuts in public health funding and a lack of doctors. Because of my diabetes, I need to take blood tests every three weeks with a specialised doctor. I must take a boat or a plane to travel to Athens to take these tests. I’ve calculated that each new baby costs me about 5,000 euros. 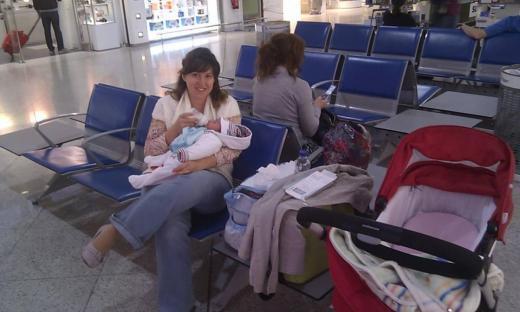 Georgia in the Athens hospital with her newborn baby in 2011.

What’s scary is that the slightest medical complication can have serious ramifications here. When he was a month old, my first child developed a urinary tract infection. We had to make an emergency flight to Athens in order for him to receive the appropriate medical care.

There is a private clinic in Santorini, but it is not adapted for giving birth and is horrifically expensive for a Greek person. The only people who can actually get treated there are tourists, but only for “small” problems. If, for instance, they have a car accident, they can’t be operated there and instead have to be evacuated to Athens. 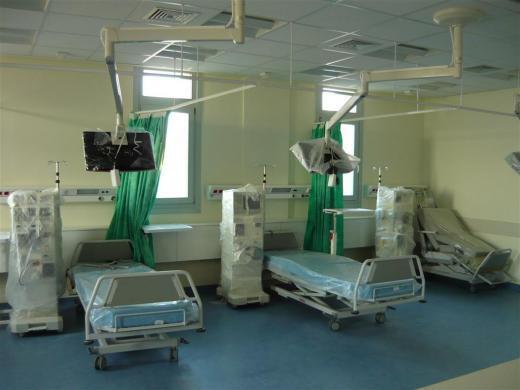 According to our Observer, medical equipment is still under plastic sheets, as shown in these photos taken in 2011. Photo published here.

Santorini hospital, a symbol of the country's budget cuts

The budget for the Ministry of Health was drastically cut as a result of the austerity programme launched by the Greek government in 2009. Between 2009 and 2011, public hospitals’ budgets were sliced by 25% and a third of all hospitals were on the brink of shutting down. In fact, Greece has become one of the European Union countries with the lowest health spending per capita. As a result, doctors have publicly protested several times in the last few years in Greece.

Santorini is not the only Greek island that lacks a health centre and that relies on evacuations to Athens to treat patients. However, it is the only such island that has a brand new hospital—albeit one that never opened.

In 2008, Greece's health minister, Dimitris Avramopoulos, decided to build this hospital as a response to the growing medical needs of the island’s 15,000 Greek inhabitants as well as those of the many visiting tourists. In 2007, 92,000 patients had visited the island’s now-closed medical centre, which was completely overwhelmed by the demand.

Since then, however, the hospital project has completely fallen through, to such an extent that a group of residents, of which Georgia Nomikou is a part, launched an online petition demanding its opening. The group is hoping to collect 15,000 signatures -- one for each resident of Santorini. 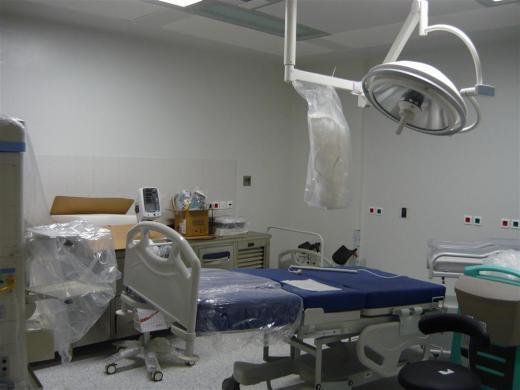 The hospital building has been abandoned since the end of construction, but the equipment has not been moved. Photo published here.