A young Spaniard fights ‘against fascism’ in Ukraine

Two young Spaniards recently arrived in Ukraine’s eastern Donbass region, which is currently the theatre of violent clashes between separatists and government forces. One of them, 27 years-old Rafael Munoz, spoke to FRANCE 24. He told us he wanted to fight against fascism, just like his forefathers did against Spain’s General Franco.

Two young Spaniards recently arrived in Ukraine’s eastern Donbass region, currently the theatre of violent clashes between separatists and government forces. One of them, 27 year-old Rafael Munoz, spoke to FRANCE 24. He told us he wanted to fight against fascism, just like his forefathers did against Spain’s General Franco.

In a video circulating on social networks, the two young men explain that they arrived in Donetsk with 500 euros in their pockets and a backpack to fight alongside militias belonging to the self-proclaimed Republic of Donetsk [considered to be pro-Russian]. The militia groups are currently battling Kiev’s armed forces.

In this video, the young men explain : "We’re here so that the world can see that what American and Spanish television stations are saying is wrong. People here aren’t terrorists, they aren’t criminals, they’re simply defending their homes and families. The world must fight for them and their freedom.”

Both men have joined the “international brigades” of the Vostk battalion, which regroups foreign fighters from surrounding countries. They’re communist militants. They identify the current conflict in the Donbass region to that of the Spanish civil war in the 1930s that pitted the left-leaning Republicans against the far-right nationalists led by General Francisco Franco.

They also appeared in this video, with their fists raised and weapons in hand.

We were able to make contact with one of them – Rafael Munoz. He’s 27 years old and comes from Gijon (Asturies). 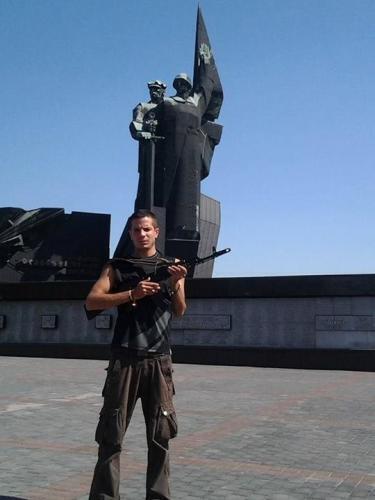 Although he has posted several photos of himself on Facebook where he can be seen proudly brandishing a weapon, he didn’t want to say if he really intended to take part in real combat.

I’m a leftist activist for the United Left in Spain, linked to the Communist Youth Union of Spain and several other social, ecological and animal-rights movements. I consider myself a Republican because I believe that the head of state must be chosen by the people that he represents. In the case of Spain, the current monarchy was imposed by the dictator Franco. It’s a living reminder of a regime which hasn’t completely disappeared.

With my friend Angel, we arrived in Kiev by plane on July 26. But we could only take the train for Donetsk five days later, because we had some problems in the capital. The plane company lost our baggage. We had to wait to get them back and then take a hotel room near to the airport. We then had to buy new train tickets, because the ones we bought online were no longer valid. That cost us lots of money. Furthermore, we were the victims of a scam at the Central Vokzal train station.

The journey to Donetsk was eventful. We were arrested by two soldiers in the train accompanied by non-uniformed people. They put us in a special separate compartment where they brusquely interrogated us. They rummaged through all our belongings and filmed them, notably the phone numbers on my mobile phone.

"I decided to sell my car and head for Donbass"

They forced us to sign a document saying that we were heading towards a conflict zone and that if we collaborated with a militia we would be considered as criminals by the Ukrainian state. They then let us go. All the other passengers had to sign the same document. We were scared to compromise the security of the battalion that we were going to join and our contacts in Donetsk. But we had them on the telephone and they assured us. So we continued. Upon our arrival, we were warmly welcomed. My friend Angel is very young, his family are worried because he’s only 22 years old. But they seemed to understand why he left.

As for me, it’s been a while that I’ve been planning this journey. I followed the conflict in Ukraine for several months, through the television and on social networks. I understood that the information was manipulated by western media. I decided to sell my car and head for Donbass to help this population that has fallen victim to the arrests, killing and bombardments carried out by the regime in Kiev. That’s what other freedom fighters did to save my country in 1936. At this time, the powers looked elsewhere and my country finished by having to put up with 40 years of the Franco dictatorship. I’m fighting for social justice and freedom for the people.

I had to tell my mum that I was going for humanitarian work. I didn’t want to worry her because she has health problems. But unfortunately, she’s certainly going to find out. My sister already found out through social media networks. Her convictions are the opposite of mine and she’s really angry. Relations between us have gotten worse.

The militias fighting today against the regime in Kiev don’t want to be part of the European Union. The only thing that it brings, is a rise in prices accompanied by a lowering of salaries. It’s what happened in my country: inequalities have gotten worse and favor fraud and institutional corruption.

Many young Spaniards have praised their initiative. On the other hand, others have pointed out flaws in their arguments and as such, refer to them as "Putin's idiots".

Since their arrival in Donbass, both young men have given several interviews to Russian media outlets that are particularly fond of their story.