The concert was supposed to celebrate the end of the Muslim holy month of Ramadan, but the festivities turned into a nightmare for those gathered on a beach in a suburb north of Guinea’s capital Conakry. At least 33 people died and dozens were injured in a huge stampede. Our Observers sent us photos documenting the tragedy and accused the organisers of making serious errors.

This photo was taken by our Observer, Johnny M., who was a member of staff at the concert during which a stampede took place.

The concert was supposed to celebrate the end of the Muslim holy month of Ramadan, but the festivities turned into a nightmare for those gathered on a beach in a suburb north of Guinea’s capital Conakry. At least 33 people died and dozens were injured in a huge stampede. Our Observers sent us photos documenting the tragedy and accused the organisers of making serious errors.

Joseph Mina Mira lives in Ratoma, a few metres away from Rogbané beach. He went to the concert on the beach around lunchtime.

I was surprised to see that people were still allowed to enter the concert space even though it was already really crowded, everybody squished up against one another. I was also surprised to see lots of young children, between the ages of 12 and 14, in the crowd. Some were with their parents but others seemed to have come without adults.

Around 8:45pm, when the concert was winding down, the people who were closest to the water, on our right, started to push us. [Editor’s Note: other witnesses said that the incoming tide caused spectators to stampede]. Suddenly, everyone panicked and tried to get out.

The problem was that there was only one exit and that, outside of it, lots of other people were still trying to enter the concert space, hoping to get in for free because the price of entry was too steep for many [Editor’s Note: The cost was about 25,000 Guinean francs, which is equivalent to about three euros]. That’s when it all descended into violence. It was a like a game of dominos. A few people -- including children -- fell, and they were trapped. Others tried to escape by climbing the barricades around the concert space and were injured on the barbed wire.

I saw people trample a very young child. He fractured both his arms and he was screaming in a terrifying way. I dragged out two young girls myself and brought them back to my house. One of them had been trampled on and she couldn’t breathe. Her parents came to pick her up to take her to the hospital. They called me later to tell me that she had died en route to the hospital.

What revolts me is that the organisers let in very young children with absolutely no oversight. 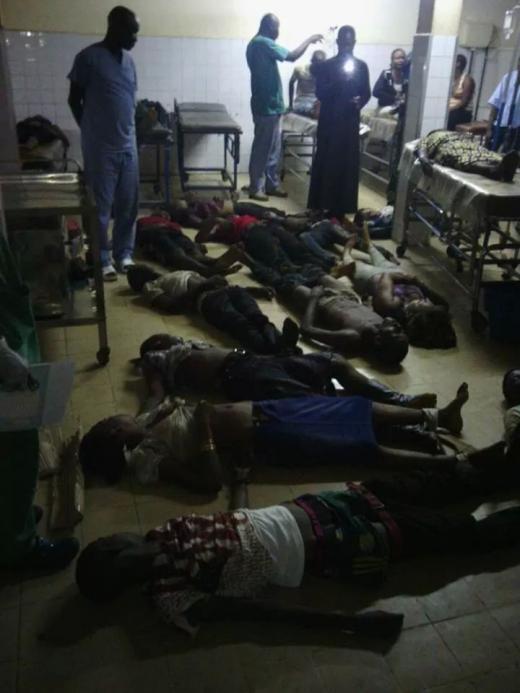 Bodies line the floor in the morgue at Donka hospital several hours after the tragedy. Photo taken by our Observer Nouhou Baldé.

Thirty-three people, including 11 children, died in the tragedy and 60 people were injured, according to a statement released by Donka Hospital. Our Observers in Ratoma said that the final death count could be closer to 50 people.

“The beaches aren’t fit for this kind of gathering”

Johnny M. (pseudonym) was a member of staff at the event. He blamed the organisers for the tragedy.

The doors opened at noon for a concert, which was supposed to start at 2pm. It didn’t actually start until 5:40pm because people kept flowing in. I can’t tell you exactly how many spectators there were, but what’s certain is that there were far too many.

Some of us members of staff started feeling like the situation was out of control. There was only one police vehicle -- a pick-up truck with about a dozen policemen. There were about the same number of security guards.

Some of us asked the managers to stop the concert so that we could evacuate people calmly. The managers refused. [Editor’s Note: The events company refused to respond to this statement.] Moreover, each group performed for about 45 minutes, even though they were only supposed to stay on stage for half an hour at most. Everything ran later and later and, instead of finishing at 7pm, the concert finished at 9pm. Night had fallen by that point. Even with the lights on the beach, we couldn’t see much, which amplified the panic already spreading through the crowd.

In my opinion, the fault lies with the organisers. But there is another fundamental problem. In Conakry, there is no existing infrastructure fit for a concert of this kind of extremely popular urban music. The only building with sufficient capacity is the “28-Septembre” stadium and they haven’t held any events there since the 2009 massacre. [Editor’s Note: On September 28, 2009, hundreds of people at an opposition rally at the stadium were killed and raped by Guinean security forces, according to Human Rights Watch] Other concert spaces are either too expensive or too small. That’s why events companies look to the beaches because they are both cheap and large enough for the crowds.

The problem is that they are not at all designed to facilitate evacuations in case of a stampede. This is the second time in a year that we’ve seen tragedies like this occur on the beaches. On New Year’s Eve, six people were killed in a similar stampede after a reggae concert. How many deaths will it take for people to take notice?

Some local media report that up to 10,000 people were at the concert. This photo was taken by Observer Johnny M.

When contacted by FRANCE 24, Ablaye Mbaye, the director of the events company that organised the concert, said that he was “in mourning” over the tragedy and was sorry that a “concert that was going so well descended into violence at the end.”

He refused to comment on accusations made by a member of his staff that the company was at fault for the tragedy. Mbaye insisted that his company “was used to organising such concerts” and explained that the company “had not sold more tickets than usual.”

The day after the tragedy, Guinean President Alpha Condé suspended the head of the government body in charge of entertainment and declared a week of national mourning. An investigation has also been launched to determine the cause of the tragedy. A government team of investigators went to the beach on Wednesday.

Several of our Observers also visited the beach. They described debris strewn across the sand in the aftermath of the stampede: broken chairs and shoes, clothes and mobile phones abandoned in the panic. They sent us the following photos.

Shoes left behind on the beach.

Some even lost their wigs in the frenzy go get out.

Debris strewn across the beach.