The Ukrainian army made stunning gains over the weekend, overrunning pro-Russian insurgents in the eastern towns of Slavyansk and Kramatorsk after months of bitter fighting. But according to new video, members of Right Sector – an extremist group - are battling alongside regular army soldiers.

The Ukrainian army made stunning gains over the weekend, overrunning pro-Russian insurgents in the eastern towns of Slavyansk and Kramatorsk after months of bitter fighting. But according to new video, members of Right Sector – an extremist group – are battling alongside regular army soldiers in Ukraine's conflict-shattered east.

Right Sector is a radical ultra-nationalist group that helped topple former president Viktor Yanukovych’s government in February. While Russia claims the group has a fascist ideology, Right Sector members say they’re nationalists fighting to safeguard Ukrainian sovereignty. If the video turns out to be accurate, it would mean that radical nationalist militants are fighting alongside regular military personnel.

Video taken in the village of Karlivka and posted to YouTube on July 6, 2014.

This video was taken in the eastern village of Karlivka, some one hundred kilometres from Kharkhiv. At 0:57, a soldier can be seen wearing Right Sector’s red and black insignia with the group’s name stitched around the edges. Troops can also be seen wearing the same patch but without the group’s name. This flag alone represents the country’s renowned World War Two insurgent army. As such, it is popular with Ukrainians across the nationalist spectrum. Without ‘Right Sector’ stitched across it, the same badge could be worn simply as a symbol of nationalism. 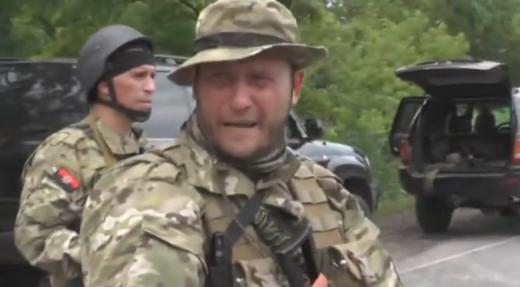 At several points in the video, Right Sector leader Dmytro Yarosh comes into view. Yarosh unsuccessfully ran for president in the country’s May elections: he scraped together less than 1% of the vote. According to reports, Right Sector members began joining Ukraine’s National Guard when fighting first broke out in the east. The National Guard was formed in March at the instigation of Kiev in direct response to the annexation of Crimea by Russia. Made up mainly of civilians – primarily activists involved in the Maidan protests [the anti-government protests that began in December 2013] – it plays a supporting role in the Ukrainian army’s eastern offensive.

“Right Sector is an autonomous army, though some battalions operate under the Ministry of Defence”

Contacted by FRANCE 24, a spokesperson for Right Sector asserted that members of the group have been fighting alongside the Ukrainian army for months – backing earlier reports in both Western and Russian media outlets. He affirmed that some even took their orders directly from the Ministry of Defence:

Since the events of Maidan, we have always helped the Ukrainian army… Right Sector is an autonomous army, though some battalions operate under the Ministry of Defense. Otherwise, we are free to do as we please.

He added that while the group remains “extremely wary” of the Ministry of the Interior, it still works “hand in hand” with the government in Kiev. He goes on to describe the composition of a typical Right Sector unit:

Our units are composed of volunteers, young people and sometimes former soldiers. Above all, they’re there to defend the country. For a few months we’ve also formed training camps, helped by the government [Editor’s note: the spokesperson stressed, however, that Right Sector had not received arms from Kiev]. There, our recruits follow an intensive course of training. The people who join us are, in general, democratic nationalists. We are not fascists; we simply want to participate in the politics of tomorrow with the government in place.

Another video allegedly showing militants belonging to Right Sector in the village of Karlivka. Posted to YouTube on July 6, 2014.

Right Sector militants have already claimed to have taken part in the ongoing combat against pro-Russian separatists that has wrecked parts of eastern Ukraine. But if the group’s militants are keen to stress their inclusion in the Ukrainian army, government officials certainly aren’t. Alekseï Lebed – a spokesperson for Ukraine’s National Guard – empathically denies that the government has any links with the right-wing group, which he accuses of “lying.” Speaking to FRANCE 24, he added that Kiev had never – and would never – work with ultra-nationalist militants. Lebed refused to watch the video allegedly showing Right Sector operating in eastern Ukraine.

"Right Sector extremists have joined the army, but they fight individually alongside other soldiers”

FRANCE 24 got in touch with Ilya Vasyunin, a journalist for Russkaya Planeta who is a specialist on Ukraine and currently works there. He explains that Right Sector militants are indeed fighting with the army, but only on a small-scale.

Right Sector is a name that denotes an entity of extremist groups that were present in the Maidan protests. One cannot talk of their inclusion in the Ukrainian army, seeing as there are no direct links between Right Sector and the Ukrainian government. Simply put, many Right Sector extremists have joined the Ukrainian army, but they fight individually alongside other soldiers. There are no specific Right Sector units fighting in the army. That said, the only thing one could speak of would be the AZOV battalion – a unit composed of 100 soldiers – which gathers many extremists, including Right Sector combatants [Editor's note: The AZOV battalion operates outside the army but with the approval of the Ministry of the Interior]. The AZOV battalion is effectively financed by politicians, including Oleg Lyashko [leader of Ukraine’s Radical Party].

One must also understand that Right Sector is a franchise. This name is constantly evoked by Russian media outlets in order to discredit the Ukrainian army.

"Many try to give the impression that its members make up entire battalions... they do that for political ends"

Right Sector seems to be becoming more and more of a pariah: the government can’t stand that it claims to be working with Kiev. Right Sector combatants have joined the army individually and many, in doing so, try to give the impression that its members make up entire battalions. But of course, they do that for political ends.

According to witness testimony, members of Right Sector are indeed fighting in eastern Ukraine. But it remains to be seen whether or not these militants collaborate with the army, or - as the group affirms in this article - whether they operate independently. In any case, it seems that their presence in Ukraine's eastern theatre of conflict is tolerated by the authorities.

This article was written by FRANCE 24 journalist Andrew Hilliar (@andyhilliar).