School principals in Bukama, a city in southern Democratic Republic of Congo, have found a rather unorthodox way to renovate their schools’ buildings for free: under the cover of “handicrafts” workshops, students — often very young ones — are building the bricks themselves in clay quarries, rather than studying.

Children, some “younger than eight”, working at a brick quarry in Bukama. Photo taken last week by our Observer.

School principals in Bukama, a city in southern Democratic Republic of Congo, have found a rather unorthodox way to renovate their schools’ buildings for free: under the cover of “handicrafts” workshops, students — often very young ones — are building the bricks themselves in clay quarries, rather than studying.

Child labour was formally abolished by a 2008 order from the Congolese Minister of Social Affairs. Yet in Bukama, a city of about 40,000 in Katanga province, students’ handicrafts workshops are difficult to distinguish from forced labour. Children from a dozen primary schools in the city go to clay quarries every day to make bricks. Derance Onimba, one of our Observers in Bukama, took photos of children at work, some “younger than eight years old,” he said. 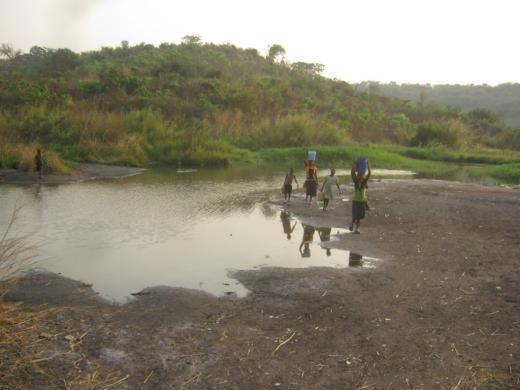 The students first go to find clay in the quarries and then bring it to construction sites. 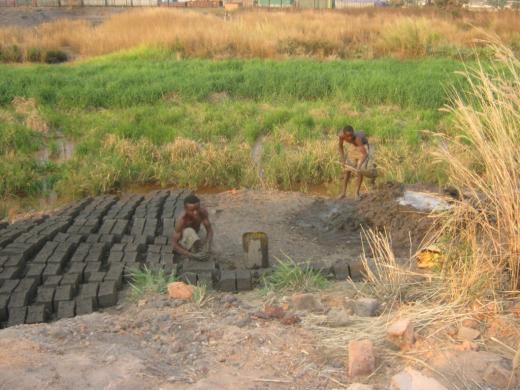 The older students make the bricks during the school day. Some produce “up to 400 per day,” according to students’ parents.

“Some children work between six and eight hours per day”

Every day of the week, starting at 7:30am, children make their way to the clay quarries in groups of 8 or 10. They extract the clay and place it in moulds to create bricks. During this time, other students will go out to cut down branches to create more moulds, while others transport the bricks to the schools undergoing renovation. The children relay one another in these tasks. Some days, they spend more time working than sitting on a school bench.

Those considered to be the “most robust” work from six to eight hours a day. But I’ve noticed that very young children, too – some younger than ten – might spend four hours a day doing this kind of work. Sometimes they are not even supervised by their teachers, who leave them alone to work. That’s why I was able to take photos.

Officially, parents are told that these activities are part of “daily handicrafts workshops.” [A text dating back to 1954 recommends that children should work with their hands for an hour a day]. But for the last two months, many people have been complaining that their children are extremely tired and experiencing back and joint pain. Many children are working beyond their physical capacities. According to my observations, 10-year-olds make about a hundred bricks per day, and 16-year-olds can make up to 400 a day. 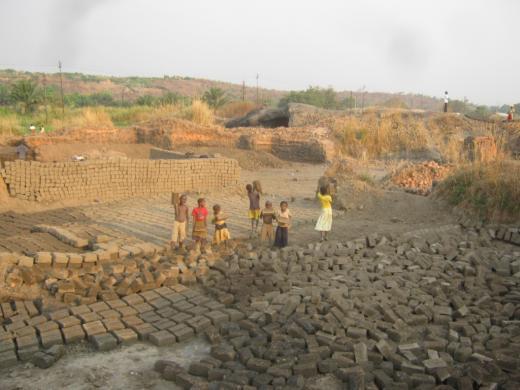 The youngest children are made to carry bricks and assemble them on construction sites at the local schools. Photo by our Observer.

“If parents oppose this practice, their children could be expelled”

Kenga Kadi Lufu is an inspector for the Ministry of Labour.

A month ago, we organised awareness-raising workshops with school principals to encourage them not to take advantage of children through “handicrafts”. During the workshop, each teacher officially commits to not using child labour, but as soon as the meetings end, the tone changes, and teachers and principals tell me that “I’m not their boss and that they really don’t care”.

The main problem is that there is an agreement between a renegade parents’ committee and the principals of the Bukama schools. Since the majority of parents did not want to finance the school renovations, the principals and this committee decided unilaterally – without consulting the rest of the parents – to make children work in the quarries. Those parents who disagree are stuck: if they oppose this practice, their children are threatened with expulsion.

A few schools did stop these activities, but don’t have room for all the children of parents are against this. We identified about a dozen schools in Bukama that engage in this practice, which affects about 1,000 children in total. But there are surely more, since many rural areas are beyond our control.

Cosmas Mugimba, the region’s education director, lives in Kamina, 140 km from Bukama. He explained that these “handicrafts” workshops were necessary in order for schools to be renovated:

We live in great poverty, and the government does not fully appreciate the how difficult it is for us to renovate our schools. The principals are doing everything to fix the buildings, which are often in very poor condition, and they have asked for contributions from the students’ parents. However, many parents refused to pay the necessary fees [editor’s note: 3,000 francs, or about 5 euros, which would reportedly cover both school fees and renovation costs]. Accordingly, it was decided that the children would participate in renovating their schools.

I am willing to launch an investigation and to evaluate the burdens placed on the students if it is true that children are working beyond their capacities and that this is causing physical problems. I think that the statistics that are circulating [Editor’s note: up to 400 bricks per day for some children] are inflated, because no parents have come directly to us to complain.

The FRANCE 24 Observers frequently report on stories about child labour. Check out some of our latest articles: