Rebels from the Democratic Forces for the Liberation of Rwanda (FDLR) have been terrorising residents in the eastern Democratic Republic of Congo since the end of the last decade. Now - under pressure from the Congolese army - roughly 100 rebels have now chosen to lay down their arms in North Kivu. But many locals say the so-called surrender is little more than a publicity stunt.

Our Observer, Charly Kasereka, took all of these pictures on May 30, 2014.

Rebels from the Democratic Forces for the Liberation of Rwanda (FDLR) have been terrorising residents in the eastern Democratic Republic of Congo since the end of the last decade. Now - under pressure from the Congolese army - roughly 100 rebels have now chosen to lay down their arms in North Kivu. But many locals say the so-called surrender is little more than a publicity stunt.

The FDLR, which is made up of Rwandan Hutu rebels [see below for more detail], announced the surrender on April 18. The organisation said in a press release that it was giving up the armed fight in order to “devote itself to the political struggle in Rwanda”. The UN and the African Union applauded the move, having long called for the FDLR’s unconditional surrender. 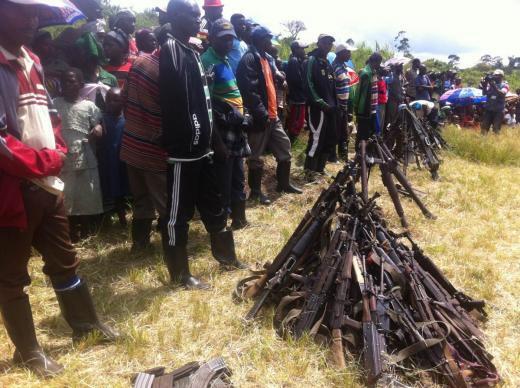 “All around us many residents were singing and dancing”

Charly Kasereka is a Goma-based journalist and blogger who witnessed the first phase of the surrender, near the small village of Kateku.

I was very surprised to count only about 100 men at the site of the surrender. The FDLR has not specified the number of people that would be present, but we had hoped to see more men giving up arms [editor’s note: the number of FDLR rebels is estimated at about 1,000 in North Kivu, out of a total 2,000 in the North and South Kivu regions]. They were all dressed in civilian garb, but the ceremony had military aspects: they were in rows and standing to attention. Then, they laid down dozens of weapons, including AK47s, mortars, and Colts, about a third of which were in very poor condition. Some had inscriptions on them such as “Property of the US Government." 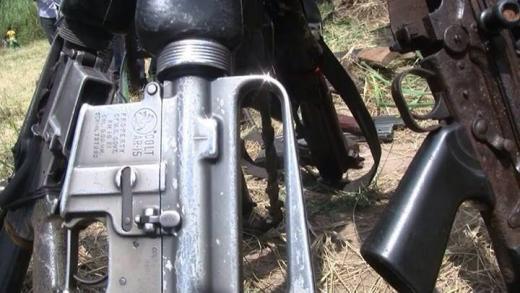 A Colt surrendered by FDLR rebels bears the inscription “Property of the US Government”.

Those who surrendered appeared very calm; it didn’t seem like we were witnessing a military surrender. Out of the 105 soldiers, there were even eight officers who went back into the bush. Some explained that they wanted to go back into the bush to “raise awareness of the surrender among other FDLR members” or to “cultivate their fields”. They were allowed to leave. 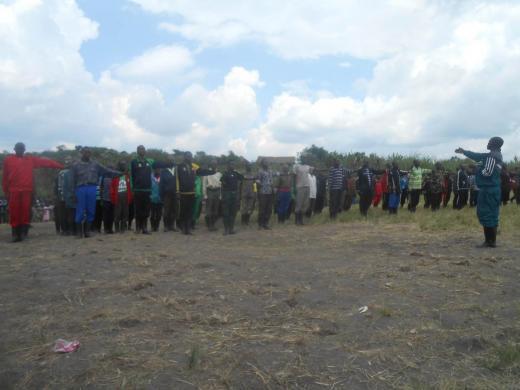 The FDLR who surrendered carried out military demonstrations.

All around us many residents were singing and dancing. For them, it is a real relief. In the past few years, the rebels often looted their fields and carried out retributions against villagers. Some women and girls from the villages told me that they were raped. These demonstrations of joy seemed to bother the FDLR spokespeople, who on several occasions spoke to them in Swahili [a language spoken in eastern DRC] to ask them to keep quiet. Many residents were also fearful of being interviewed on tape, because they feared possible revenge attacks. 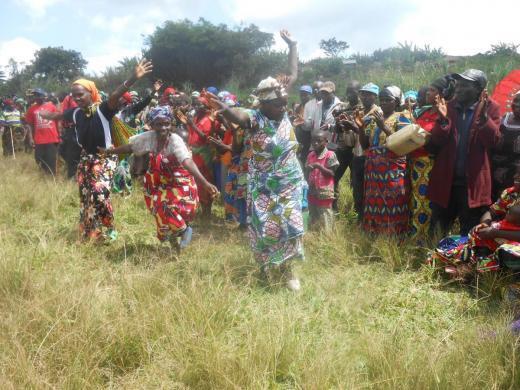 Other locals told me that there had been much less looting and that they had seen a general change in behaviour by the FDLR over the last few months. According to the village’s school principal, rebels even attended classes in order to improve their French. If the FDLR indeed want to launch a political party as they claim, it is not surprising that their members are trying to learn an international language such as French. 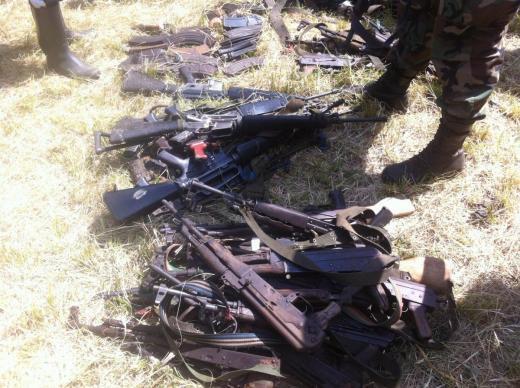 Weapons surrendered by the FDLR.

A publicity stunt for the international community?

The FDLR consists of a group of exiled dissident Rwandan Hutus that oppose the government in the capital, Kigali. Many of them are accused by the UN of having participated in the 1994 Tutsi genocide during the civil war in Rwanda. Towards the end of the war, the group took refuge in the eastern region of Democratic Republic of Congo. Since then, it has been regularly accused of committing serious crimes against Congolese civilians.

In March, the UN and the Congolese army handed the rebels an ultimatum and demanded their disarmament. Already undermined by international sanctions targeting its sources of funding, the movement was forced into negotiating the surrender of top former fighters against safety guarantees. The movement also claimed it wanted to devote itself to the “political struggle”. But the Rwandan government refuses to negotiate with the rebels. One of the group’s key figures - Sylvestre Mudacumura - is wanted by the International Criminal Court (ICC) on charges of genocide. He has never been arrested. 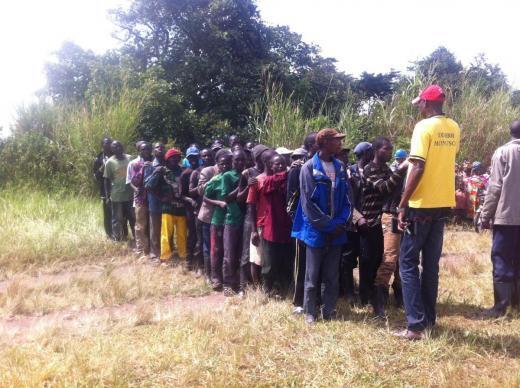 This partial surrender was supposed to be the first of many: a step-by-step process meant to take place over a period of 22 days. The end result would have been the transfer of some 1,400 rebels to the province of Equateur, about 2,000 kilometres west of Kivu. According to comments made by the governor of North Kivu – Julien Paluku – in “Jeune Afrique” magazine, the former FDLR could then decide “whether to return to Rwanda or to ask for asylum.”

He says the Congolese government is seeking to move the FDLR far from Rwanda to prevent rebels from escaping across the border. Paluku also claims such a move would pre-empt habitual accusations that the DRC is training the rebels to mount attacks in the future. But not everyone in North Kivu is convinced. Omar Kavota – a spokesperson for the North Kivu Civil Society Organisation – is among those sceptical of the FDLR’s intentions.

The FDLR’s show of good faith is a publicity stunt to avoid getting tracked down by the UN and the Congolese military, as had been threatened if the ultimatum failed. But if we account for the number of fighters and weapons that exist in the Walikale region, this first phase of the surrender is very disappointing.

FDLR activity remains high in the Virunga Park and in the Rutshuru region. In Mashuta, we even noticed that a local militia, the so-called Force for the Protection of the Hutu People, has been created. We do not yet know its purpose. We fear that the FDLR might infiltrate these local militias. Formally, they would cease to exist in the eyes of the international community, but in practice they would continue their activities.

On Monday June 2, MONUSCO [United Nations Organisation Stabilisation Mission in the Democratic Republic of Congo] declared that the number of fighters to have given up arms was “insignificant” and called for the “surrender of all high-level officers in the next few days”.