Koungou, a town of just over 26,000 people in the north-west of the French overseas department of Mayotte, has been overrun with stray dogs. With authorities failing struggling to deal with the problem, some residents have decided to deal with it on their own.

Koungou, a town of just over 26,000 people in the north-west of the French overseas department of Mayotte, has been overrun with stray dogs. With authorities failing struggling to deal with the problem, some residents have decided to deal with it on their own. Last weekend, at least seven dogs were found hanged on electricity poles in the town centre, much to the residents’ horror.

WARNING: The images below may shock viewers.

When I saw the hanged dogs, I was shocked, but frankly, it was only a matter of time before something like this happened. In Koungou, we’ve had enough of these dogs. They often come into my garden. They are thin and hungry, looking for food. I have very young children and I sometimes hesitate to let them play outside for fear that they will be attacked. Some of my friends have goats that have been attacked and dismembered by these dogs.

We feel the problem hasn’t been tackled head-on: we often see young people walking around town with a dozen dogs around them, herding them – and none of them are on a leash. No one goes to talk to them and make them aware that this is a problem. I don’t want to justify violence against animals, but I’m not surprised that some residents have decided to take the law into their own hands.

“Generally, our complaints about animal mistreatment end up in the bin”

At the beginning of April, the Mayotte prefecture launched an operation to comb the island in search of stray dogs. According to the animal rights organisation “Gueules d’amour” (Faces of love), based in the capital Mamoudzou, 20,000 stray dogs were counted on Mayotte in 2010. Today, the number of stray dogs could be as high as 30,000.

Dominique Fourno is the president of the organisation, which has been fighting to protect animals on Mayotte since 2006.

Historically on Mayotte, even up until just 30 years ago, dogs were used by Mahoran Muslims [Islam is practiced by 95 percent of the people of Mayotte] to hunt hedgehogs and pigs. But today, many Mahorans hate dogs. They refer to them as “impure” animals. So far in 2014 alone, we have counted at least 14 dogs have been killed.

On February 25, a dog belonging to a French-Mahoran couple bit, but didn’t injure, a young Mahoran girl who threw stones at the dog [according to witnesses]. The girl told her parents, who then gathered a dozen people to wreak vengeance. This dog, as well as another dog the family owned, was beaten in front of its owners’ eyes, before being dragged through town in retaliation. We filed a complaint, and it was one of the rare occasions in which our complaint was heard in court. Generally, they just end up in the bin. 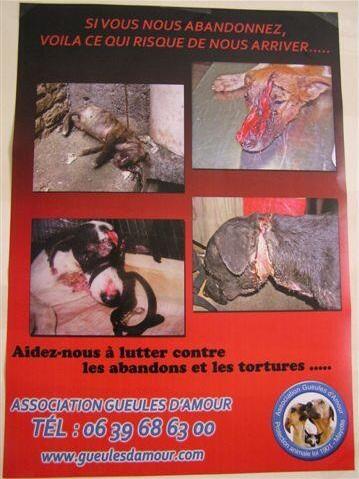 One of the organisation’s posters showing photos of known cases of violence against dogs in Mayotte.

The dogs are generally cross breeds, and are very often abandoned, either by people who can no longer afford to feed the dog, or by “Wazungu” [white foreigners] who come to work on Mayotte and decide to abandon their dog before returning to France. The dogs venture into bush land during the day and at night, they chase in packs. They are very wild. Some Mahorans manage to catch them and train them to become fighting dogs [a claim that has also been made by the French National and International Animal Rights Organisation, or ANICA].

More than anything, it’s a problem of resources: a police brigade has been put in place, but there are only two of them and they need to cover Mayotte’s entire territory [374 square kilometres, or three times the size of Paris] and only have a simple rifle-net, ineffective for catching wild dogs. If they catch them, there is only space for a few of them in their trucks. There is only one dog pound on the island, and it’s completely full. Today, we’ve let the problem go unchecked for so long that we don’t have the resources to control it anymore.

When contacted by FRANCE 24, Koungou city representatives refused to comment, referring enquiries to the Mayotte prefecture. The prefect director also declined to comment. A source at the prefect’s office says it is a “sensitive issue” that is being “looked into”.