Videos have emerged of anti-nuclear plant protesters grabbing onto the hood of a Taiwanese member of parliament's car as he tried to flee -- and hanging on for several kilometres.

Screenshot from the video below, published by Yan-Ting Yeh and shared by Taiwan Voice.

Videos have emerged of anti-nuclear plant protesters grabbing onto the hood of a Taiwanese member of parliament's car as he tried to flee -- and hanging on for several kilometres.

In Taipei, the Taiwanese capital, over 28,000 protesters gathered around the parliament and the presidential building over the weekend to oppose plans to build a fourth nuclear power plant in Taiwan, demanding that the MPs remain inside the building until they agreed to stop the construction project.

In the afternoon of April 25, Tsai Cheng-Yuan, an MP from the Kuomintang – one of the main parties in Taiwan, which is pro-Chinese and supports the construction of the plant – tried to escape by car through a back alley. Lin Sheng-wen, an independent filmmaker attending the protest, realised what was happening and tried to stop the car. Another protester, Yan-Ting, filmed the scene on his mobile phone.

This scene was filmed by Yan Ting, a protester who witnessed the incident. At the 20 second mark, the car accelerates and two people can be seen hanging onto the hood.

When the filmmaker started to hold onto the car, we all truly believed the MP would stop. Someone else jumped on the hood, but the car kept moving. We yelled: “Stop! What are you doing?” but the MP and his driver wouldn’t even crack open the window to talk to us.

Several of us tried to help out, but suddenly, the car began to speed up, and Lin Sheng-wen and the other protester were forced to hang onto the hood in order not to get run over. The police finally found them two kilometres later, still clinging onto the hood, not injured but in a state of shock.

"This MP has always been deeply contemptuous of protesters"

MP Tsai has always been deeply contemptuous of protesters, calling us “retarded” or “sheep” in public, telling us we don’t know what we’re fighting for. But I didn’t think he would go so far as to physically threaten a protester. I see this incident as a symbol of the deep divide that currently exists between politicians and the people [Editor’s Note: seven out of ten Taiwanese people are opposed to the construction of the fourth nuclear plant].

The difference now is that thanks to the recent Sunflower movement [a movement that started on March 18 to advocate for greater transparency in Taiwanese politics], many people are now aware that things can change in Taiwan if the people remain united and refuse to bow down to politicians.

Additional footage shows what happened next

Over the weekend, other videos have emerged showing the MP’s flight, notably a video filmed from a car’s dashboard camera. The footage shows MP Tsai’s car driving with the protesters still hanging on to the hood. The driver with the dashboard camera tried to block the MP’s path, and his car rammed into hers.

A driver was hit by the MP’s car as he drove away from parliament, the two protesters still hanging on to his hood. The video was uploaded to Facebook in two parts by Betty Lin. Watch the second part of the video.

Why are there anti-nuclear protests in Taiwan?

The plan to build a nuclear power plant, which is at the root of the protests, goes back to the 1990s. The construction has frequently been delayed for political reasons, but now Kuomintang MPs want the project to move forward.

The protest movement took a new turn on April 22 when Lin I-hsiung, a crucial figure in the history of Taiwan’s democratisation, began a hunger strike to protest against the renewed construction of the nuclear reactor. Several thousand people gathered this past weekend in the streets of Taiwan to support him and to demand an end to the project. The crowds were dispersed early on Monday morning by anti-riot police, who used water cannons.

For the time being, the Taiwanese government has called for additional inspections, but it is not planning on stopping the construction of the fourth reactor. 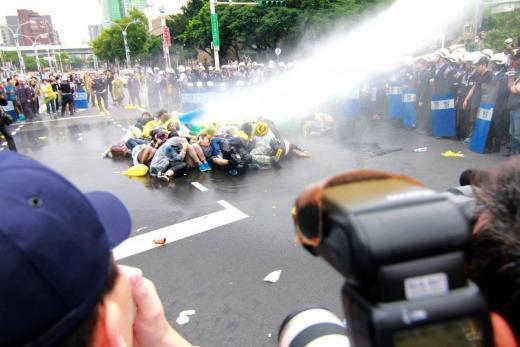