Clash of the cartoons in Ukrainian crisis

The crisis in Ukraine is not just playing out on the military level. The battle between pro-European and pro-Russian forces is also occurring via cartoons on social networks.

Two caricatures of Vladimir Putin circulating on social media: to the left, those shared by the pro-Europeans, and to the right, the pro-Russian cartoon that depicts the president as a genie. The text states “Welcome to Crimea. Please make yourself at home.”

The crisis in Ukraine is not just playing out on the military level. The battle between pro-European and pro-Russian forces is also occurring via cartoons on social networks.

In early March, Ukrainian artists had appealed to their Russian counterparts to not draw divisive cartoons. This message was apparently unconvincing: 420 Russian artists signed an open letter to support Vladimir Putin’s position seeking to “ensure at any cost the security of the Russian-speaking populations in eastern Ukraine”.

On the main social networks in Russia and Ukraine, most notably VKontakte, caricatures and photomontages trying to discredit pro-Europeans and pro-Russians are everywhere. They often recycle well-known clichés about both sides.

Two cartoonists, one pro-European and the other pro-Russian, discuss their participation in this propaganda war.

“Thanks to the cartoons about the crisis, I am able to make a living”

Yurily Zhuravel is a cartoonist and lives in Rivné, a city in northwestern Ukraine. He is pro-European and has published over 120 cartoons regarding the Ukraine conflict since November 21, 2013. These cartoons have become his personal brand.

People often tell me that my drawings are very important for them: when I stop even for just a few days, people clamour for more! These caricatures support my fellow citizens in their struggle, and help to comfort them. My art generates a kind of patriotism and causes people to reflect on their attitude toward the government and its foreign policy.

Prior to the crisis, I was not well known as a political cartoonist. Since then, I have been able to make a livelihood from my cartoons alone, and I have received 150,000 hryvnas (9,600 euros) to finance a collection of political drawings. One of my most popular drawings is one that represents the hundred “celestials” [the 94 people that have died since November in Ukraine during the revolution]. It was printed on large banners and hung in several areas in Kiev and in other cities. 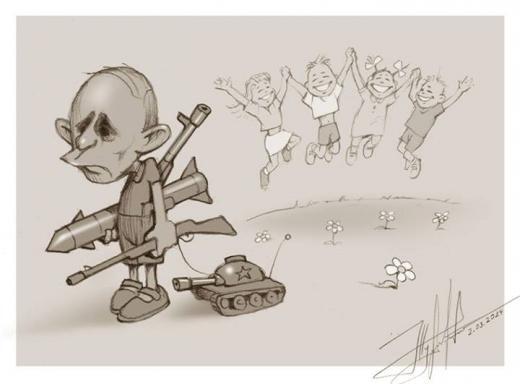 In this cartoon by Yuriy Zhuravel, Putin is rejected by other children who do not want to play with him. Angry, he goes off to play alone with his little tank.

I don’t care if Putin doesn’t like what I draw: I show things the way I feel them. I was in the army, and I could very well go to the battlegrounds, in Donetsk or Luhansk, to defend Ukrainian interests. But I am trying to keep my anger inside and fight through my drawings.

“My cartoonist colleagues hate me”

Vitali Podvitski, a professional artist, lives in St Petersburg. He supports the Russian position in the conflict and has specialised in drawings related to the crisis in Ukraine.

I try to show, through my drawings, what my audience is thinking. I don’t get the feeling that I am being pressured, and I can work freely on the subjects that I wish to focus on.

I was very surprised by the statements of support that I have received: people from Crimea and Russia, as well as pro-Putin organisations, thank me every day. They tell me that they needed someone to make their perspective on current events seem more real. They often tell me that television is insufficiently subtle and that propaganda is too overbearing. Drawings allow for a greater deal of irony, which permits the artist to do many things. 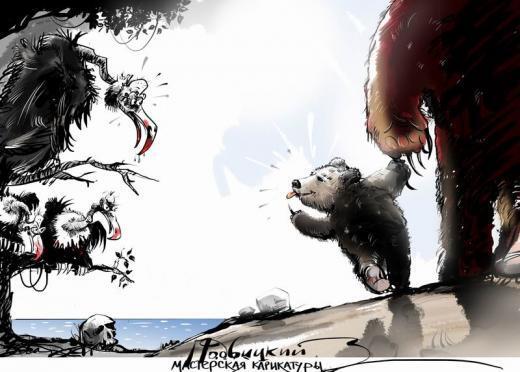 A caricature by Vitali Podvitski. The big bear represents Russia and the little bear represents Crimea. This little bear is putting his middle finger up at the vultures that are circling around Ukraine. The cartoon was published on VKontakte on March 12, by Podvitski, following a letter from a little Crimean girl.

In the artistic milieu, my popularity levels are quite low. Most artists in Russia are part of the intelligentsia and are anti-Putin. My colleagues hate me because I’m not acting like them: they draw what they think, whereas I draw what people think.

I feel that there is a strong enthusiasm for Vladimir Putin’s position, which I can’t bring myself to criticise. It would not be coherent, given how my audience feels. Several days ago, I wrote to him to tell him I was ready to take a position in the army to protect the borders — via my pencil — because there are no pro-Russia cartoonists. 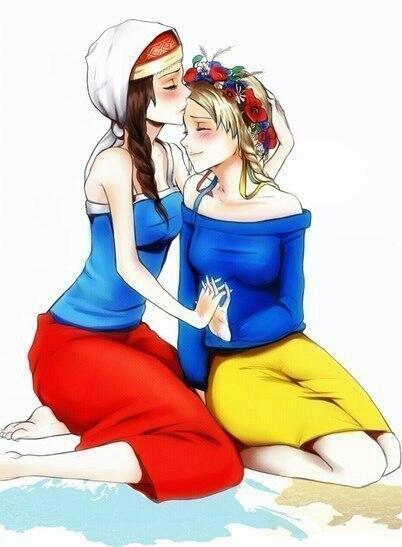 This cartoon celebrates the Russian-Ukrainian friendship by showing two women holding one another. This picture received many comments online. According to the anti-Russia camp, the image is humiliating, because it shows a Russian woman comforting a Ukrainian woman.